Yesterday may be far away for some; but a high-spirited comic primer of one male’s vainglorious attempts to be “hip” and his bewilderment at all things relating to women awaits from the exuberant, misty-eyed from laughter, nostalgic story-telling of Thomas W. Jones II.

With a headlong rush back into time, Jones casts a magnetic spell in The Wizard of Hip, Or When in Doubt Slam Dunk at MetroStage. Jones, by the way, is the playwright, director and alter-ego character Afro Jo in the production.

Full of knowing nods to male bafflement about the “growing-up-to-be-a-man” journey, Jones becomes Afro Jo, an every-man stand-in for XX chromosome folk. The fast-paced saga flows easily from up-front “factual” monologues from the mind of an adolescent; to the speedy, nuanced wordplay of a college-aged guy to beautifully delivered, rhymes and rhythms of poetry from a mature man beginning to appreciate life as the autumn of his years approaches.

Over the course of the evening, Jones takes on the strength and resolve of women who groomed him for life. With Afro Jo’s male gaze, he portrays tough-minded mother, eye-rolling sister, strong-willed nuns, and a patience college coed. Jones does it armed with a soprano voice and provocative mannerism. As Afro Jo, Jones also mixes into the performance important male figures such as Dad and some Queens, New York neighbor boys growing up the 1970’s.

So, what kind of humor is there specifically? There are some purposely lame jokes with drum rolls and rim shots to stoke the audience into reactions. Know that this is not late night, cable network humor, or those of contemporary days (well, except some use of “salad.”) There are a bevy of spot-on jokey vignettes that hit their mark about male ignorance about females.

One knowing vignette brought me to tears as Afro Jo spoke of the need for learning sensitivity while taking a date to a restaurant. She wanted to hear the entire menu as the waiter wanted to do. He just wanted to order the last item he saw on the menu. During the date, he described a color as pink; she called it mauve. Afro Jo became a jumble of wide-eyed puzzlement and impatience.

And these quick notes: There are comic takes about how to dress not as a dork and to use deodorant. Remembering his first awkward attempt at sex in college, Afro Jo learns a bit late that snuggles and cuddles are critical to any good connection. Yup, priceless to learn.

Then come exquisite moments of a boy’s learning from revered sports figures. With projections of graceful athletes such as Willie Mays (in his “Say Hey, Kid” days), or NBA stars with the grace of Willis Reed (NY Knicks), he takes on a Danny Kaye-like “Tchaikovsky” routine, naming professional basketball gods of generations ago, ending with a loving call to the ballet-like Dr. J making a slam dunk. It is beautiful.

As the The Wizard of Hip progresses, darker tales emerge. These are moments the production does with love, care and authenticity and are to be seen, not described. These moments, tinged with loss and the mist of heaven, give light to what Afro Jo has become as the curtain falls. 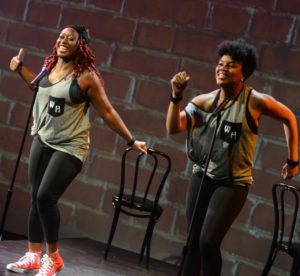 Attention must also be paid to Jasmine Eileen Coles (Lady Doo Wop 1) and Kanysha Willams (Lady Doo Wop 2). These two are newcomers to MetroStage and to me. They are simply terrific. They give the production loads of pop and vigor and, yes, good-natured sass with their singing, energetic dancing, and acting. Singly and as a duo, they tease and needle Jones, with his full approval.  As for musicians, William Knowles (whose original music is used in the show) and Greg Holloway are joys, not just at musically propelling the production, but also at being non-musical sidemen and on-stage side-kicks for Afro Jo. The open set is by Carl Gudenius and Shuxing Fan, with lighting by Alexander Keen and sound design by Gordon Nimmo-Smith. Michael Sharp dressed his charges in loose-fitting dance attire fit for all the vigorous dance and aerobic movements.

At the weeknight performance I attended, the diverse audience was small in size, but high in enthusiasm. In some instances, I felt the women in the audience taking pity on Afro Jo. With the few other men in the audience, there were moments of loud, pure laughter at seeing ourselves so deftly portrayed. I, for one, was stripped bare of all pretense.

The Wizard of Hip or When in Doubt, Slam Dunk is a swish – a home run, to mix-in athletic metaphors. Jones is good-humored, wise, and totally hip with his storytelling. This is not late-night, cable comedy. What could have been like an old, stale routine feels fresh and memorable as Jones crosses many boundaries.

Running Time: One hour and 45 minutes, with one intermission 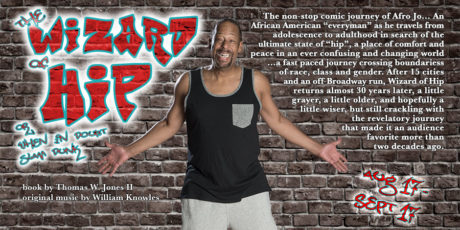