Hal Prince, producer/director extraordinaire is far too modest. His new offering at the Manhattan Theatre Club is so vastly entertaining that I hereby elevate him from PRINCE to KING OF BROADWAY for masterminding this two and a half hour extravaganza which he’s managed to accomplish with just nine very talented actors.

Part of Prince’s gift has always been his ability to surround himself with talents that match his own. In this case his co-director and choreographer is once again Susan Stroman, his book writer is David Thompson; his scenic, costume and lighting designers, are the venerable Beowolf Boritt, William Ivey Long, and Howell Binkley. Another of his disciples is Jason Robert Brown who has arranged, orchestrated, and supervised the music of the dozens of composers whose works supply the evening’s entertainment.

Yes, Hal Prince’s control of the overall is apparent throughout the evening; one can sense what they once called the “Ziegfeld touch” – the notable presence of personality in a production – also present in shows by Jed Harris, George Abbott, and Mike Nichols, who have set the standard for excellence in the glorious past of Broadway.

Prince’s company of nine is asked to play everything from star to ensemble member in this two-act selection of samples from musicals we’ve known and loved. Because they are so smashingly staged and performed here, they come off as well for those who’ve never seen any of the original productions, as they do for veterans like me who’ve seen all of them.

Various members of the company appear from time to time as Prince himself, to lead us into the next number, and these introductions tell us all we need to know of the circumstances under which these songs were created. We begin simply with Michael Xavier lending his beautiful voice to “Hey There”, the song that helped establish Jerry Ross and Richard Adler as two song writers of rare promise in The Pajama Game, which launched them as well as Mr. Prince with Robert Griffith as his co-producer. It was followed by Chuck Cooper as the baseball coach in Damn Yankees, telling 3 of his players they gotta have “Heart!”, another Adler and Ross success. As sung and staged, this rouser earned the first of a dozen cheers that stopped the show. It featured Michael Xavier, Brandon Uranowitz, and Tony Yazbeck.

The next winner from the Prince oeuvre was West Side Story. It showed early on that he was a visionary, for the musical had been dropped by another major producer (Cheryl Crawford) who did not see it developing along lines she liked. It might never have happened had Prince not seen its potential. The use of Tony Yazbeck and Kaly Ann Voorhees to sing “Tonight” in the balcony scene introduced us to musical theater romance with underpinnings of turmoil that were rarely exposed in the musicals of 1956. He was, to quote a title from a later project, “opening doors”.

Next came two delicious re-interpretations from She Loves Me, the first musical which he directed from the start. He had taken over that job on A Family Affair a year earlier, but all he could accomplish on that early John Kander musical was patchwork. In this current bio-musical, Brandon Uranowitz and Kaly Ann Voorhees now returned to bring George and Amelia, the two leading characters in She Loves Me to vivid life with “Tonight At Eight ” and “Will He Like Me?”, creating wild enthusiasm once again out front.

And so it went through five more segments in Act One alone, giving us gorgeous segments to look at and listen to from Follies, A Little Night Music, Fiddler on the Roof, and the equally memorable Cabaret. In the Follies segment Tony Yazbeck brought great pathos to “The Right Girl” in which he topped himself again and again in soul searching dance. Brilliant. In Night Music Emily Skinner revealed a wry comic ability by dropping wit and sarcasm into “You Must Meet My Wife.” Chuck Cooper, an African-American, made Tevya in Fiddler a fascinating Orthodox Jew, asking what would happen “If I Were A Rich Man”. In Cabaret Karen Ziemba proved herself a character actress par excellence as Fraulein Schneider tearing into the savage “So What?” with wig, costume and accent that transformed her into someone light years away from the svelte musical comedy soubrette she’d played in her earlier shows.

Janet Dacal joined the eight I’ve already mentioned, each playing various roles in such distinctive style that the evening truly felt like an extravaganza. Suggestive scenery, dazzling costumes, proper sound management, superb vocal and orchestral arrangements brought all of these musical treasures to vibrant life so when intermission came there was a buzz out front that spelled out “Wow!”, a word not often used in regard to most recent musicals.

No let down in the second act either. Starting with a stunning skeleton set, Company was as startling today as it was when it introduced the term “concept musical” to Broadway in 1970, in which the Hal Prince and Stephen Sondheim collaboration was established, one which would lead to half a dozen memorable musicals in the rest of the 1970s. In it Emily Skinner grabbed hold of what had been the late Elaine Stritch’s signature song, “The Ladies Who Lunch”. She brought a new approach to it that was clearly and most effectively her own. “Being Alive” gave Michael Xavier another home run with his deeply felt and very moving attack on this rouser. Even something as familiar to us as “Ol’ Man River” brought Show Boat back fresh as a coat of paint, sung with particular attention to the lyrics by Chuck Cooper. Hal Prince does not favor revivals and only directed this classic Jerome Kern/Oscar Hammerstein musical in 1993 because he felt it had been neglected. His all star cast delivered his vision for a run of over 900 performances.

Like Ol’ Man River, Prince of Broadway just kept rolling along until Brandon Uranowitz thrust himsef into the role of Molina, the gay window dresser in Kiss of the Spider Woman whose explanation of who he is was delivered with “Dressing Them Up” which was another thrilling example of a talented actor doing a true star turn. Karen Ziemba followed with her highly original and almost unrecognizable turn as Mrs. Lovett describing “The Worst Pies In London” , and Chuck Cooper peaked with “My Friends” in which he completes his right arm by adding his newly found silver razor, turning him into Sweeney Todd, the Demon Barber of Fleet Street.

Jason Robert Brown’s new anthem, “Do The Work” concludes the evening on just the right note, for it sums up the career of Harold Prince, who at 90 is still up there inspiring, mentoring, producing and directing, for which we owe him so much. I urge you to see this beautiful, bountiful tribute to him. 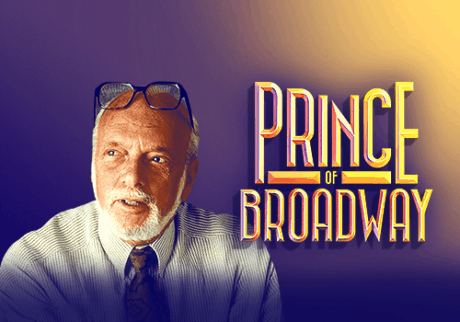