Want to see some really cool plays with women at the helm of the production? We’ve got great news for you! Women playwrights and women-led theater companies are ready to entertain you at the Kennedy Center’s 16th Annual Page-to-Stage New Works Festival September 2 – 4. This year women’s works span the spectrum from dramas to comedies to musicals to competitions. All shows are free. These talented women are modern muses who are more than just the inspiration for shows, they’re the whole theater package – writers, directors, actors, set and costume designers, and producers galore. Here’s a quick guide to a few amazing performances you won’t want to miss. Please come and #StickAround the festival with us! You won’t regret it!

2:00 p.m. – Shadow Man by Tuesday Barnes, a thriller about a sanitation worker who fakes his own death in order to escape the stress of his day-to-day life. In this process, he learns that running away from his problems means he has to face himself and the man he has become.

3:00 p.m. – Soulmates Body by Marketa Seliyah Nicholson, a dark romantic comedy about finding love and yourself in the most unlikely of places. Chloe is a morgue director who feels like spending time with the dead is really living until a new assistant, Connor, shows her that there is more.

3:30 p.m. – Up All Night Singing – 48 Hour Musicals Created by 5 Musical Theater Teams curated by Dara Gold. New ten-minute musicals will be created by five different musical theater teams, including the ladies of Liberated Muse. TMD Theater is also stoked to collaborate with The Coil Project and Wednesday Verses who each have their own team. Each team will undertake the challenge to write, compose, rehearse, and stage their musicals within 48 hours, nothing is made beforehand. Yvonne Paretzky will MC.

7:00 p.m. – Rooftop: A Song Cycle by Star Johnson, starring Alesia Ashley in a one-woman folk-pop musical inspired by the story of Nayla Kidd, the Columbia University student who, amidst the pressures of Ivy League life, dropped out of school, went into hiding, and became a missing person for two weeks.

8:00 p.m. – That Part Is True by Madeline Farrington, starring Karen Elle, Obum Ezekwem, Harvey Fitz, Kathleen Vaughn Crosby-Brooks, and stage directions read by Tim Trueheart. As a blizzard approaches, four activists are planning something big. Once they’re snowed in together, they discover that one of them isn’t who they thought, and a great unraveling begins. How well can you ever really know someone? In their high-stakes world, the answer can mean the difference between life and death.

9:00 p.m. – Star and Tim Has a Show! by Star Johnson and Tim Abrams, hailing from Washington, DC, and New York respectively. These best friends and sometimes roommates present a modern-day, vaudeville-style double act, featuring original music on such topics as politics, dating, and getting old(er).

6:00 p.m. – Abortion Road Trip by Rachel Lynett. We all have baggage. Sisters Minnie and Lexa bring some of theirs on a road trip—they have hired a taxi driver to take them from Texas to New Mexico so Lexa can get an abortion. Along the way, Minnie and Lexa attempt to mend their relationship as sisters while the driver revisits her tumultuous relationship with her partner, Taylor. Winner of the Best Comedy award at the 2017 Capital Fringe Festival, this darkly comic production balances biting humor with heavy subject matter to reveal the deeply nuanced nature of women’s friendships, journeys, and reproductive choices.

1:00 p.m. – #poolparty by Jennifer Mendenhall. The history of swimming pools, a family’s success in desegregating a private swim club, and the legacy that lands on a young swimmer.

5:00 p.m. – Of/By/For: An Experiment in Civic Discourse devised, researched, and directed by Rachael Murray. Of/By/For is about the exchange of viewpoints and perspectives in the United States, based on responses from its citizenry and inhabitants. This piece is in its beginning research stages and this will be a brainstorming session that includes anonymous recorded interviews and written responses to prompts. Stop by and share your thoughts on the state of the nation for this open-source theater project in progress.

Pramkicker, Staged Reading by Sadie Hasler in the Chinese Room.

7:30 p.m. – Pramkicker, Staged Reading by Sadie Hasler. It’s about a woman who kicked a pram. Hard. And the pram went flying. And it fell down the stairs – bam bam bam. It was empty. She’s not a psychopath. But then she got the mother into a headlock and ended up in a court ordered anger management class with her sister Susie, there for moral support and the occasional restraining hand.

The Welders present in the Russian Lounge:

9:00 p.m. – Alternative Departures by Deb Sivigny and Rachel Hynes, a showcase of two short excerpts of The Welders’ work, both dramas, that start from alternative departure points including devising and design. 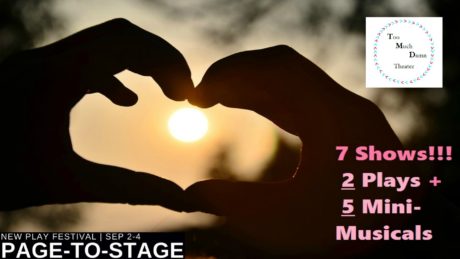