Fresh from World War I and a devastated Europe, The Roaring Twenties indeed roared across America. In the midst of a raging economic boom fueled in no small part by the advent of film and radio, celebrity and music soared into people’s daily lives, igniting dreams and get rich quick schemes.

One such musical celebrity was none other than the Empress of the Blues, Bessie Smith.

And, as portrayed by the fabulous Miche Braden in Mosaic Theatre Company’s season opener, The Devil’s Music: The Life and Blues of Bessie Smith, she really is an Empress; a larger than life, non-stop singing, loving, drinking, hallucinating, rapping, wondering force of nature; a no-nonsense party girl (except when it comes to love) who stared down the Klan and refused to enter through any club’s back door.

As she toured up and down the east coast, becoming one of the highest paid musicians in America, and the highest paid Black musician anywhere, she rented a sleeper car to use as a non-discriminating hotel.

Her musicians, played by a team of lovable sidekicks, are Bassist Jim Hankins, Saxophonist Anthony E. Nelson Jr., and Pianist Gerard Gibbs. They try to keep the indefatigable Smith tethered to reality: one less drink if you please, one fewer provocation if you don’t mind. But Ms. Smith will have none of it.

As the Roaring Twenties slammed headfirst into the 1929 Stock Market crash, so to did the Empress of the Blues and her soul way too big for this world.

For unlike another recent bio-play, A Night with Janis Joplin, The Devil’s Music not only captures the soul of Ms. Smith’s music but the demons churning away inside and outside that soul.

From the opening moments of the show, when Saxophonist Anthony Nelson lets loose from house-left, filling the auditorium with his raucously mournful horn, and, then, Miss Bessie Smith comes barreling through the front door and dares us not to greet her adoringly, we know that we are in for a hell of a ride.

Her music, from “T’aint Nobody’s Bizness If I Do” and “St. Louis Blues” to “I Ain’t Got Nobody,” but it was the pain that made her music, and The Devil’s Music makes that pain abundantly present.

She tries to sing her way through the struggle to juggle music and family and love and, indeed, that attempt gives her her indelible place in music history.

But, in the play written by Angelo Parra and conceived and directed by Joe Brancato, the more she sings into her struggle, drinking on every song, the more the devil himself seems to take her by the throat.

We love her music—sexy and lusty and full of life as it is—even though after all is sung and done we see through the bluster and witness the lost love at the heart of blues. 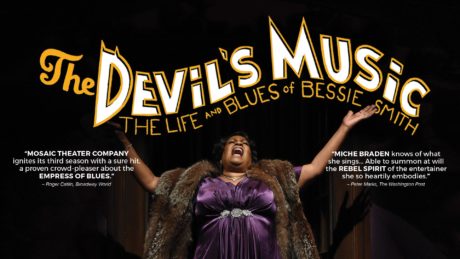 The Devil’s Music plays through September 24, 2017 (with a potential extension week through October 1), at Mosaic Theater Company of DC performing at the Atlas Performing Arts Center – 1333 H Street NE, in Washington, DC. For tickets, call the box office at (202) 399-7993 ext. 2, or purchase them online.