As a teenager growing up in the 1950s in a small New Jersey town just across the river from Philadelphia, I was hooked on R&B music, my transistor radio tuned to WDAS-AM, 1480 on the upside of the dial. I sang and danced my way out of the house listening to Georgie Woods, “The Man With The Goods” and the sounds of Philly’s soulful music.

This was taboo. Forbidden in a community that watched Perry Como on TV and listened to Patty Page on 45 rpm records. 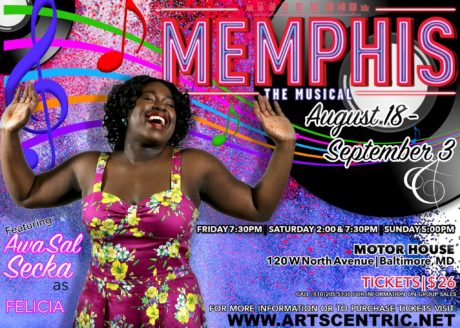 These memories swirled in my head last night as I watched ArtsCentric’s marvelous staging of Memphis -The Musical at the re-designed Motor House, located in Baltimore’s burgeoning Station North Arts & Entertainment District.

Though the city is Memphis – not Philly – the musical is set in those same places where rock ‘n’ roll was born in the ‘50s: the underground night clubs, recording studios, and, especially, the radio stations.

Enter Huey Calhoun, a wannabe disc jockey who will change Memphis (and the world) by playing the music he enjoyed in an off-limits Beale Street club. Ryan Burke plays the naïve but passionate promoter with gusto and humor and vocal prowess. He never falters from his first rendition of “The Music of My Soul” to his closing “Steal Your Rock ‘N’ Roll.”

Huey’s love interest is Felicia Farrell, the wannabe star recording artist… but she’s black and her brother Delray is ferociously protective of both her career and her emotional involvement with a “cracker.” Director Kevin S. McAllister is fast becoming one of the popular go-to-guys in the Baltimore-DC corridor. From putting on Dreamgirls at Toby’s Dinner Theater and directing Memphis in Charm City, he has gathered a group of superb talent.

Awa Sal Seeka soars as Felicia and has the audience rapt from the moment she belts “Ain’t Nothin’ But A Kiss,” then quietly seduces us with “Love Will Stand (When All Else Falls).” As Delray, David Hammett sings a heartfelt homage, “She’s My Sister.”

What a terrific trio these top notch actors pull off whether they are fighting for equality or singing their hearts out. In fact, every performer in this show is worthy of praise.

Highlights include terrific dancing in “Everybody Wants to Be Black on Saturday Night,” with a nod to choreographer Torens Johnson and to Musical Director Cedric D. Lyles who played piano and conducted the onstage ArtsCentric Band: Percussionist Evander McLean, Michael Kellam on Bass, and Adrian Mitchell on Trumpet.

Kudos to the large ensemble and the featured leads – the amazing Derrick Truby as Bobby and Kymon George Carriker as Gator – who brought tears to our eyes when he first spoke and sang with his brothers and sisters. Set Designer Ryan Haase created a jazzy moveable that never hinders sight lines. The costumes by Kitt Crescenzo also ring true – I remember.

While the theme of race can be heavy, this rollicking musical remains uplifting for both young and old. At last night’s performance, the audience clapped along and raised arms for the praise-worthy “Make Me Stronger.” You can bet I was among them.

Running Time: Approximately 2 hours and 25 minutes, with one 15-minute intermission.