Aglaonike’s Tiger, written by Claudia Barnett and directed by Deborah Randall, is playing now at the Venus Theatre in Laurel, MD. The drama is based on the first recorded woman astronomer of Ancient Greece. Aglaonike (Ann Fraistat) seems to have been one of the first accurate prognosticators of the phases of the moon and lunar eclipses. However, in those times, as in a vast part of history, women who were smarter than their male counterparts were often regarded as witches and sorcerers. Our recorded history of Aglaonike indicates she was no different and was often attached to a group of women labeled the Witches of Thessaly.

Barnett has chosen to use the structure of Greek drama to present her play. It opens, as do almost all Greek plays, with a female Chorus. The Chorus in this vehicle also takes on other roles, and costumes and disguises allow us to understand who these actors are now portraying. The chorus members play roles of both genders. One scene will have them as the witches and the next as the male astronomers. The actors also take on individual roles as well. They do this seamlessly and give strong performances throughout the production. Katie Jeffries Zelonka, for instance, does a wonderful seductive tango as a tigress. Amy Rhodes also plays Yia Yia, Aglaonike’s grandmother, and artfully conveys this caring and hardworking woman. Katie Hileman is the third member of the group and also brings us several wonderful characters along our road with Aglaonike.

In this tale Aglaonike has a pet tiger. The tiger is first represented as a puppet while it is still a cub. When it becomes an adult tiger the Tiger is portrayed by Matthew Marcus. Marcus, perhaps, has the most physically daunting role I have seen in a long while. He spends a great deal of time walking and slithering across the stage and platforms with claws curled in a feline stance. It is only when Aglaonike seems to be more than just his master, and in the scene with the tigress, that Marcus is really on his two feet as he erotically dances tangos with the two females. It is a stellar performance.

Fraistat is a strong Aglaonike. She captures her doubts, her fears, and her fortitude, allowing her to carry on her scientific studies amid doubt from a culture that believed in mysticism and multiple gods who ruled their universe. Her scene with her grandmother shows the compassion of this young woman. Her scenes with her pet show her sexuality.

Deborah Randall also plays the role of Erichtho, the sorceress. She, too, has an animal companion, a snake, that is also a puppet. Randall’s performance is also very textured. She is at times the enemy, a teacher, a friend, and a supporter to Aglaonike. At times, she is quite menacing as she glides around the stage.

As the director, Randall has done a wonderful job presenting this vision. Along with her lighting and sound designers, Kristin Thompson and Neil McFadden respectively, pictures of mysticism and the heavens are created with just a minimal set created by Amy Rhodes. There is a moon that we see change phases and even be eclipsed, an altar and some mobile structures to create temples, prisons and homes. As usual, Randall makes use of everyday objects. Paper towel cardboard and odd sparkly caps become, for example, telescopes and witches’ costumes.

Some of the most effective pieces of stagecraft are the use of these wonderful puppets of the tiger cub, snake, and even an owl. These were created by Matthew Pauli. Also, giving this an ancient Greek touch, was the use of masks created by Tara Cariaso. The wonderful choreography, previously mentioned, is attributed to Alison Talvacchio.

Barnett has created a very interesting drama and with the focus today on STEM studies for woman, and the wonderful movie Hidden Figures, Aglaonike seems like a perfect model to be the focus of this story. My only problem: I was never quite sure whether Barnett and, even Aglaonike, were on the side of pure science or whether they felt that mysticism and magic were controlling the universe. In fairness that could be because the Greeks themselves could not make that division. What man could not explain with scientific facts, he or she often explained with his imagination. Even today, there are those who feel that our weather and our universe are controlled not by universal scientific truths but by other powers out of our control.

As Venus Theatre often does, it give us a play we will remember and one that will make us think about issues that affect the lives of women. Aglaonike’s Tiger is a wonderful example of this goal.

Venus is a small theatre so tickets are limited. You will want to get down to Venus Theatre before this eclipse ends.

Aglaonike’s Tiger is dedicated to Tricia McCauley, the earth/star worshipper that we still call friend. 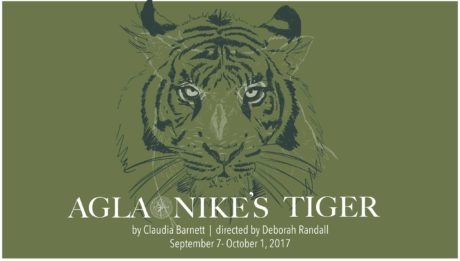