Even before the houselights go dim, sparks fly. That vision — of fire blazing from a riveter’s gun in a factory in Detroit — is emblematic of what is to come in Skeleton Crew, Dominique Morrisseau’s beautifully-wrought play, now making its Washington DC debut at Studio Theatre.

Set in Detroit in 2008, the play humanizes the economic disaster that is unfolding just outside the breakroom of a small automotive parts plant where production has visibly slowed.

Flaring tempers and flashes of laughter dominate the stage as four characters — three assembly line workers and one supervisor — bicker and banter with each other between shifts.

The play begins as Faye — the tough yet motherly union rep who has worked at the plant longer than anyone else — saunters into the breakroom, rips up the ‘No Smoking’ sign on the table and lights up a cigarette. It’s a wonderful riposte to the riveter’s blast, and a proclamation, on the part of a lifelong maverick, that she’s the boss.

Caroline Stefanie Clay gives a pitch-perfect performance as the renegade Faye, a labor organizer who enjoys breaking rules, and does so with the same zest that she used when she fought for her workers’ rights. Faye joined the company as a single mother, 29 years earlier, but, having come out as a lesbian, feels a closer bond with Reggie, whose late mother was her close friend.

It is her loyalty to Reggie, who has sworn her to secrecy regarding management’s plans for closing the plant, that sets the plot in motion. It is typical of the play’s many ironies that Faye, the union rep, becomes the vehicle propelling management’s crackdown on the workers.

Faye is a survivor. She knows that the secret of survival is to keep on moving.

Reggie is the supervisor who is torn, throughout the play, between his real family — members of the middle class whose future rests entirely upon his ability to represent the owners — and his work family, who depend on him for their jobs and thus their futures, too.

Played by Tyee Tilghman, Reggie is the quintessential ‘good teacher,’ trying to get his workers to follow the rules while quelling their fears and motivating them to work harder. Costume Designer Marci Rodgers has done a wonderful job outfitting Reggie in the white collar and tie that announce his status, and adding the pullover and glasses that make him look professorial.

Costumes play a visible role in establishing Dez, the seeming ‘bad boy’ of the crew, who virtually disappears into his hood when caught breaking the rules. Jason Bowen brings a delicious bravado to the role of the irresponsible — and irrepressible — dude who keeps hitting up on his pregnant co-worker, Shanita.

Picture a sassy Madonna, flaunting her belly, tugging at her trousers, and arching her back in order to get out of chairs, and you have an approximation of Shannon Dorsey playing an extremely pregnant young woman whose hope in the future defies expectations. 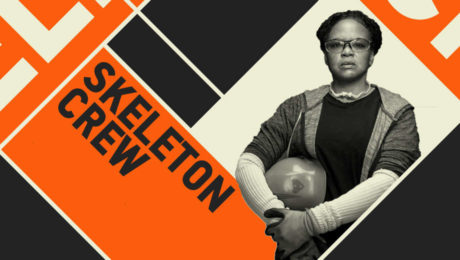 Dorsey is iridescent as Shanita, especially when she delivers an ode to the automobile industry and her role in it. Her awe at the idea of being part of something REALLY BIG is religious in its intensity.

She is equally lyrical in her condemnation of drivers who refuse to merge. This is road rage on a Shakespearean scale. Dorsey, while both comical and passionate throughout, is astonishing in these two soliloquies.

Shanita is as indomitable as the spirit of Detroit. Which means that she is probably the alter-ego of the playwright, Dominique Morrisseau, who is an outspoken supporter of both the city and its largely invisible working class population.

In fact, it was in order to make those workers visible — and indeed heroic — that Morisseau embarked on the trilogy that concludes with Skeleton Crew. (The other two plays are set earlier, in 1949 and 1967). Called The Detroit Project, the plays are modeled on August Wilson’s 10-play cycle, which is set in Pittsburgh, another much-demeaned working class town.

Although new to most DC-area theatergoers, Morisseau is one of the most talented African-American voices in the theatre, according to Studio’s Artistic Director, David Muse, who points out that she — like many other great playwrights — started out as as an actor.

Patricia McGregor is the acclaimed director who has brought Skeleton Crew alive. Working closely with Dramaturg Lauren Halvorsen and Assistant Director Manna-Symone Middlebrooks, McGregor has assembled a team that incorporates dream elements and plenty of action into what might otherwise have been a static play.

The set, designed by Tim Brown, is a meticulous recreation of a factory breakroom, complete with its table and mismatched chairs perched on a vinyl floor. There are milk crates serving as coffee tables, a sagging couch, and a kitchen counter with its ubiquitous white coffee pot and a microwave that’s plugged and unplugged. Off to one side are lockers and hooks.

Toward the rear, visible only when the lights go down, are the machines moving along the assembly lines. Periodically, and ominously, the lines shut down and the exit sign glows red in the dark. Lighting Designer Nancy Shertler controls the darkness of the receding plant, contrasting it with the sparks that fly from the riveter’s gun and the glare of the fluorescents whenever the breakroom is in use.

Sound Designer Elton Bradman has composed what Shanita calls the music of the machines at work. (At one point, she demands that Dez switch off his boom box so that she can listen to the melody that thrums along.) It is a soothing sound, the melody of a city at work.

Skeleton Crew is not an issues-oriented play. The conflict that looms large in this tale is not between management and labor, nor is it a pitting of black against white. (Reggie’s supervisor is likely black, as he is.)

Instead, it is about everyday lives and the ways in which the outside world impinges on the loyalties and beliefs of four very beautifully-developed characters. This is truly a must-see production.

Running Time: Two hours and 5 minutes, with one 15-minute intermission.