But suicides have a special language.
Like carpenters, they want to know which tools;
They never ask why build.
— Anne Sexton, “Wanting to Die”

Laura Rocklyn and Ty Hallmark’s new work, Clover, now playing at Ally Theatre Company’s CAOS on F space, is a marvel in miniature, with the spareness and depth of an Emily Dickinson poem. A life is a complicated thing to tell, with its false starts and long pauses, but Rocklyn and Hallmark bring Clover Adams, wife of the great-grandson of John Adams, to bright brief life in this deeply moving play.

You may know Clover Adams’s funeral statue in Rock Creek Cemetery here in D.C.: a woman, hidden deep within robes, conversationally called Grief, but named, by its sculptor, “The Mystery of the Hereafter and The Peace of God that Passeth Understanding.” (If you are, like I am, deeply terrified of ghosts while also being a Very Smart Teen with an awareness that of course they don’t exist, but also with some street-smart survival senses that you picked up from a lot of paranormal documentaries on YouTube, you’ll be pleased to know you don’t have to go to the cemetery to see the statue in person; there’s a copy of it in the Smithsonian American Art Museum. You’re welcome.) She was a noted photographer, a brilliant hostess, an acerbic wit, and crippled one too many times by emotional setbacks. She killed herself on December 6, 1885, at the age of 42.

A life is done after being done to, and this, we learn through the strong direction of Angela Kay Pirko, is Clover Adams’s story. We meet her, as played by Laura Rocklyn, in her home, alone, addressing us directly. Audrey Bodek’s set is a marvel: borders are stained by clouds of developing fluid; Clover’s photographs punctuate the walls. We’re seated in the round, almost uncomfortably close to so much private life, but this is also a blessing because Rocklyn’s face is compelling and we watch her triumphs and successes melt into deeper and deeper sadness. Rocklyn easily commands our attention. The work she is doing here is raw, and intelligent, and whole-hearted. But more importantly, it is subtle, and contained, and burns hot.

We watch Clover and Henry Adams (Nick DePinto, who you’ll end up hating by the end of the play, even though DePinto fights you with his charm throughout, he’s that good) meet at a dance, spar over politics, and fall in love. We’re as wowed as Henry is with Clover’s assured wit, because it’s the nineteenth century, and America, and women aren’t always rewarded for their intellect as much as they are for how demurely they blush. (An interesting argument about women in the nineteenth century is Tolstoy’s Kreutzer Sonata, so let me know when you want to start a book club). Clover isn’t interested in being demure, and that’s her first battle. Her mind shines too brightly and her curiosity is generous and questioning, and that’s her second and third.

And then, the flash of a bulb, we’re at another point in Clover’s life. A flash again, and we are somewhere else. (E-hui Woo’s lighting design is beautiful and so key to the telling of this story.) The metaphor of photographs – images captured, moments frozen, but devoid of emotional context because those are often burnished away with repeated viewings – is another way this company has solved what could be just another biography.

Swirling, literally, in and out of scenes of domestic life (thanks to the remarkable choreography of Angelisa Gillyard) are friends, relations, gadflies, and mistresses. Kay Pirko has a steady and thoughtful hand on all of these weaving parts, and she has been rewarded with a company with no loose ends. Alani Kravitz is worth special attention as the kind of friend under whom Clover blossoms. Both she and Clover are natural iconoclasts right up to the heel of the patriarchy. (Oh, Henry Adams.) Kravitz and Rocklyn have an easy chemistry between them. Tamieka Chavis as Lizzie Winsome, a fly in the ointment of the Adams’s relationship, is winsome when she needs to be, and flirty when it’s hurtful. I could watch an entire play where Ben Lauer is Henry James (my only note being: however bitchy you think Henry James was, double it and you’re almost there and let’s talk about that at book club). Stephanie Svec and Reginald Richard round out the cast as various maids, gossips, generals, and uncles.

Megan Khaziran has no speaking lines in the play, but her personification of Grief is a physical reminder of how Clover’s story will end. Is it too much? There is a moment where Grief overwhelms the action. It’s been several days since I’ve watched this play and that is something I am still grappling with. Grief is there almost from the start, which can read as if Clover was always going to have this particular date – as if predestination is a thing we all needn’t trouble ourselves with because why even bother. But Rocklyn and Hallmark’s careful and intuitive script also seems to point to a sort of pressing of grief, likes stones carefully placed on a body. Is heredity destiny? Clover has mental illness and suicide in her family history. Was she always going to have this particular end? It’s a play rich with these sorts of questions.

We learn, at the end, some disappointing things about Henry Adams (and it’s not Nick DePinto’s fault he’s so good at the gradual cold front he presents, it’s called acting Mike Bevel, so this is really just a reminder to myself), delivered to us by Clover, almost free from judgment. “This happened, then this. The hurt happened, here, then here. I happened, then this.” Clover is a play of tender generosity and quiet dignity, granting some kind of grace to each of the characters. It is not to be missed. 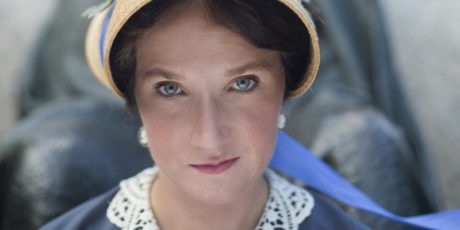 Clover plays through October 28, 2017, at Ally Theatre Company performing at CAOS on F – 923 F Street NW, in Washington, D.C. For tickets, purchase them at the venue, or online.