In these days of constant bombast and weaponized words, when sounding reasonable and wanting to be open to another person’s point of view sounds almost quaint, Peter’s Alley Theatre has taken a quiet approach for its production of Gina Gionfriddo’s Rapture, Blister, Burn, a play that deals with feminist theories and human needs.

As directed by Mark Kamie Rapture, Blister, Burn, the 2013 finalist for the Pulitzer Prize for Drama, seeks out a place for honorable reflection of the arguments that Gionfriddo lays out. Both the open-minded script and the production are far from an advocate’s focus of  “hurrrah for our side!”

For the Peter’s Alley production, Gionfriddo’s burn is in her words printed on the page. The blisters are internal, as five characters struggle with their wobbly lives, dealing with regret, bafflement and wishing it could all be different. The characters struggle to find long-term rapture in their lives.

Rapture, Blister, Burn is set in a college town somewhere in New England at some point just before social media as we know it. There is a sudden meet-up of the two central characters, Catherine and Gwen, former grad school roommates now in their forties. Twenty years before the show’s start had been best buds. Now…

Catherine and Gwen took different directions in their lives since grad school. Catherine (a soft spoken, rare-to-have-her-feather ruffled Aly B. Ettman, full of self-confidence at first; over time hollowing out from within) is a “rock star” academic. Gwen (Tiffany Garfinkle, whom we meet as a scold with a brusque demeanor, but hiding real pain), on the other hand, is a married, stay-at-home mom. She is married to a college dean named Don (Dexter Hamlett), a slacker, dope smoking, porn watching husband with little drive. Oh, and there is this; Don is the old flame of Catherine whom Gwen stole away decades before.

Why do they meet up after so many years? Well, the visit is quickly planned after Catherine makes a late night phone call to Gwen to chat about the recent heart-attack her mother suffered–but way more juicy matters are reveled over the play’s two acts.

As the play slowly unfolds, two other characters are introduced. There is a college-student baby sitter named Avery who comes into view with a black-eye. (Gianna Rapp delivering a charming, joyous attitude of youthful sass and warm openness. Rapp brings delightful comic timing and a refreshing spirit to her character). There is also Catherine’s supposed ailing mom (an unruffled, phlegmatic Nancy Blum) who has a fondness for a martini, looks totally fit, wishes her daughter love and happiness, but mostly a solid man in her life.

The soft laments and issues pitched in Rapture, Blister, Burn are often fueled by the characters consuming alcohol or wanting to. Quiet conversations with rare raised voices bring truth-telling about choices made, current inequalities between men and women, insufficient intimacy. The characters ache (though sometimes with too stiff a presence) and then ponder the possibilities of a kind of temporary, experimental life-swap. Will that help? But, more details will not be forthcoming from me to you as to how playwright Gionfriddo’s resolves her character’s high-stakes issues about feminism and their personal lives.

Adding to the self-effacing nature of the production is the set design from Dan Rammers. His set fits the small Theater on the Run space. With a single step up riser and various pieces of furniture and props, different homes, both inside and outside, are presented. With lighting design by Peter Caress and projection design by Mark Kamie a sense of time and place is visual. Aly B. Ettman’s understated costume design say tons about the characters and their journeys. The pop selection of songs and music from David Jung are terrific “brown-out” scene change interludes that add delight.

Let me add this; Rapture, Blister, Burn may resonate most deeply with an audience who lived through the critically important social and political issues that are raised such as:

Playwright Gina Gionfriddo’s provides no simple, Twitter-like headline or easy answers to the mysteries of growing older, gender issues, or the messiness of human existence. There are no clear heroes or villains, even a bete-noire to progressives, Phyllis Schlafly, receives some bon-mots.

So trigger warning, if you want shouts and physicality go elsewhere. If you expect a male misogynist gaze to set things ablaze, that is not at Rapture, Blister, Burn. The production is an earnest, well-accomplished, sobering view of three generations of folk who wonder and fret about the empty spaces in their lives.

While the show’s title may come from a Courtney Love’s band Hole song, “Use Once and Destroy,” l left with the Beatles on my mind: “And in the end, the love you make is equal to the love you take.”

Running Time: Two hours and 20 minutes, with a 15-minute intermission. 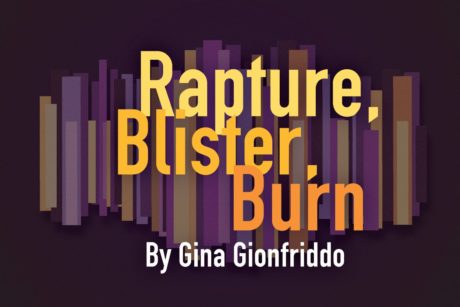 Rapture, Blister, Burn plays through October 22, 2017 at Peter’s Alley Theatre Productions performing at at Theatre on the Run – 3700 South Four Mile Run Drive, in Arlington VA. For tickets, call the box office at (202) 339-7993, or purchase them online.

Note: From an internet search comes this about Rapture Blister Burn title:

“It’s a little piece of the chorus from a song called ‘Use Once and Destroy’ [by Courtney Love’s band Hole]. And it sounds to me like it’s about [Kurt] Cobain. It says, “Take your rapture, blister, burn. Stand in line, it’s not your turn.” There’s a resentment theme that runs through her songs after his death. It’s kind of like, “Yeah, I love you, but your suicide really stole my spotlight.” I think it’s a song about wanting to be first and not forevermore the widow in the shadow of greatness. I always loved that tension in her lyrics. She has a great lyric in that song, “I will follow you anytime anywhere.” And it’s a great lyric, I think, because it means (I think) two things simultaneously. I love you enough to follow you everywhere and also…It sucks that my story will always be a footnote to yours.”