Something funny is going on at Potomac Playmakers in Hagerstown, Maryland! It’s a new production of Nunsense, an interactive musical with book, music, and lyrics by Dan Goggins. Anyone who grew up Catholic will find something amusing in this charming little musical, peppered with just enough irreverent humor to split your sides laughing without the need to say a few Hail Mary’s afterwards.

Originally based on a series of greeting cards, Goggins’ 1985 musical Nunsense is framed as a fundraiser variety show for the Little Sisters of Hoboken in a school auditorium. The sisters suffered a recent loss when their cook, Sister Julia, Child of God, killed off 52 sisters with a meal of tainted Vichyssoise. The five remaining sisters have planned the fundraiser to help bury the final four sisters who are currently being kept “on ice” in the church freezer.

Director Tod Williams and Assistant Director Nic Sigman incorporate updated references that keep the show fresh and lively for the audience, as well as some amusing audience participation moments (in a preshow, the sisters raffle a comfy couch seat in the front row). Scenery and lighting designs are minimal (credit to Blaine Smith, Chris Lane, Tom Grove, Jeff Marcum, and Mandy McClanathan), but the aesthetic of the Women’s Club is perfect for a parish fundraiser show at Mount Saint Helen’s school auditorium, and makes for a realistic and immersive experience.

Williams has assembled the perfect cast. As Reverend Mother, Kimberly Jones commands the stage with pathos and humor. Amaya Doty Dull’s Sister Robert Anne is a streetwise jokester with an emotional backstory, exquisitely expressed in her rendition of “Growing Up Catholic.” Lexi Oliver makes an angelic Sister Mary Leo, a young novice with aspirations to be the first nun ballerina. Whether singing solo or as an ensemble, the vocals are uniformly outstanding under the Music Direction of Ruthy Stenger Japson, with piano accompaniment by Charles W. Johnson.

The scene stealer of the evening is Allison Banzhoff (also co-choreographer with Williams) as the dotty Sister Mary Amnesia. She handles all of the vocal acrobatics of this challenging role with aplomb – not to mention the comic timing, improv, tap dancing, puppetry, and ventriloquism. Terri Magers, as Sister Mary Hubert, belts a show-stopping “Holier Than Thou” in the final moments of the show, turning a fun evening at the theatre into an extraordinary evening.

Running Time: 90 minutes, including an intermission. 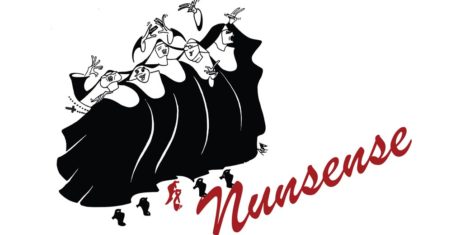 Nunsense plays through September 24, 2017 at Potomac Playmakers performing at The Women’s Club – 31 S. Prospect Street, in Hagerstown, MD. For tickets, call 240-382-7269, buy them at the door, or purchase them online.