The New York Theatre Workshop on East 4th Street in the East Village is a small but potent force in the theater community. Its mandate is to offer production of new works which deal with issues of the day. It has a small theater suitable for readings, and its larger 198 seat space has been home to new works such as Rent and Dirty Blonde (both of which went on to Broadway.) It has also produced many offerings from Tony Kushner, Caryl Churchill, and other prominent playwrights – all of whom are affectionately called “the usual suspects.”

Now playing is Amy Herzog’s Mary Jane which is in one act of 95 minutes. Set in a small apartment in Queens, it gives us an invitation to observe an indefatigable single mother coping with the mundane and often shattering aspects of caring for her chronically sick 2 l/2 year old son. She has quit college and holds down a job while a nurse is in constant attendance with her boy. But when his condition deteriorates she takes leave of her job and spends her days with him in the hospital to which he is moved in the second half of the play.

What we have here is a “this is what it’s like to be” piece of work, told with infinite grace and attention to detail. Director Anne Kauffman has skillfully maneuvered four actresses who play eight characters in support of Carrie Coon who plays the title character, the mother of the unseen boy. The first of two revealing settings designed by Laura Jellinek, (the living room of Mary Jane’s apartment in Queens) is visible as we enter the theater. It is rich in detail; and the pale green walls, the fuse box on the wall, the well worn furniture and furnishings tell us a lot about who lives there. Later, when we move to the hospital, the walls take us there, moving smoothly (remarkably smoothly) until they re-arrange themselves to feature the hospital bed and the small sitting area the room offers. We still don’t actually see the boy in the bed, but we are always aware of his presence.

One of those with whom Mary Jane shares conversation is the nurse at home, played by Liza Colon-Zayas so convincingly that I had no idea she was also playing the Doctor in the hospital in the second half. This was true also of Brenda Wehle who played the very tough superintendent whom we meet as she attacks a clogged sink in the apartment. Later in the play, as a recently converted Buddhist chaplain who comes to comfort Mary Jane, she is unrecognizably the same actor.

Danaya Esperanza plays the gawky young niece of the nurse early on in the play and a music therapist who chants to the child who is having trouble breathing, even with the help of a respirator. And finally, Susan Pourfar is seen as the mother of another disabled child in the first half, and again as an orthodox Jewish mother of six at home, coping with her seventh in the hospital. Her body language, her hair and makeup, her dialect – these all belong to two different women – yet they are all fully possessed by Ms. Pourfar.

These eight characters played by four actors, helped lend insight into Carrie Coon’s characterization. Ms. Coon avoids all semblance of cliché in playing the stoic Mary Jane. It works because though at first I thought, “No mother in this situation could be as cool as she is;” but insights into her fears and her despair come popping up through the protective coating that cover them, and ultimately her performance is very moving.

Mary Jane offers us more of an education on the intricacies and pain this mother must suffer than it does a story of suspense or one with surprise twists and turns. Therefore, even at only 95 minutes, one can join Mary Jane in hoping for some respite from its relentless sadness, but the writing is so on target, the performances are so truthful, I found myself absorbed most of the way. Amy Herzog, with 4000 Miles, The Great God Pan, and Belleville behind her, among her past works of merit, is already a major writer for our theater, and Mary Jane is an interesting experiment that will interest all who encourage good work.

Running Time: 95 minutes with no intermission. 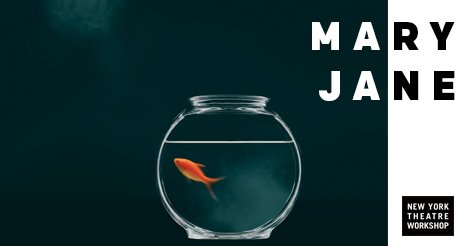