A small, amiable musical, very loosely based on Shakespeare’s Measure For Measure, has opened at the York Theatre Company on Manhattan’s Lexington Avenue. It’s called Desperate Measures and it offers a rollicking good time for those who enjoy shows that haven’t much on their minds other than to tickle your ribs and serve comfort food to your ears.

For the music by David Friedman, with a book and lyrics by Peter Kellogg, is spirited, and sprinkled with wit. To connect itself to a classic, its book is in verse that rhymes, which is so old fashioned it’s almost avant garde. There are eighteen musical numbers to help tell the story, now set in 1890 in a lawless territory out west. “Johnny Blood” (played by Conor Ryan) is its hero, a hot tempered young cowboy, who kills a man in self defense in a bar fight, but he finds himself sentenced to hang. His sister is a sweet novice nun in a nearby mission, and she pleads with a corrupt governor to spare her brother’s life. She finally prevails upon him, but he insists she thank him by giving herself to him for one night. She certainly doesn’t want that, and the madcap and complicated plot spins around a shiny sheriff, a lady of the night who doubles as a saloon singer (think a souped-up “Miss Adelaide” in Guys and Dolls), and a slightly loony priest who reads Nietzche.

The songs come fast and loose, so many of them that they tend to blend into one, but they are individually listed as “That’s Just How It Is,” “Some Day They Will Thank Me,” “Look In Your Heart,” “It Doesn’t Hurt To Try,” “What A Night,” “About Last Night,” “Life Takes You By Surprise,” and many more that sort of tell us what their author had in mind, right there in the title. The melodies are pleasant but not substantial enough to warrant so many of them.

A cast of six experienced comic actors each has a chance to land with a piece of special material, which they fill with invention and just the right amount of comic attitude. Emma Degerstedt makes a most appealing Sister Mary Jo and her musical partner, the tall and lanky sheriff Martin Green is played with quiet charm and a big voice by Peter Saide. As the flashy Bella Rose, an occasional saloon singer, Lauren Molina has the opportunity to flash her skirts and kick up her heels as a wildly frenetic Chita Rivera.

Conor Ryan’s Johnny Blood, whose fate is decided by a deus ex machina, is right up there as a worthy in a fun number he shares with her, called “Just For You.” Nick Wyman plays the nasty Governor von Richterhenkenpflichtgetruber with all the inspired miming that a man with that name deserves. He is often hilarious, and very welcome, as are they all in the spirited finale.

In the band, a grand quartet of players of mandolin, double bass, guitar and piano make good use also of banjo and fiddle under the spirited baton of pianist David Hancock Turner. Artistic Director James Morgan contributes mightily also as scenic designer, whose various sets and side pieces are constant reminders that we are in for a most pleasant treat of a friendly smile-maker of a musical. Directed by Bill Castellino, whose musical bio Cagney recently concluded a long and successful run in New York, I’d call this a spirited romp. 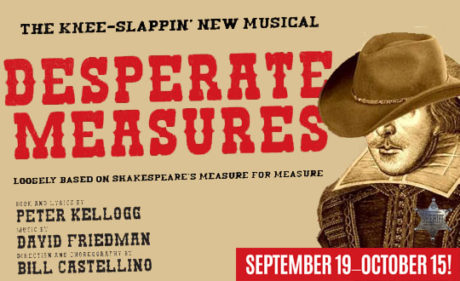