Russian playwright Anton Chekhov believed the role of the artist was to ask questions, not answer them. Vanya and Sonia and Masha and Spike, Christopher Durang’s 2013 Chekhov-inspired Tony Award Winner, doesn’t ask serious questions, but does induce many laughs and insights into family dysfunction. As directed by Melissa Robinson, The Highwood Theatre’s Vanya and Sonia and Masha and Spike is a delectation of delightful performances.

The story involves the middle-aged angst of three siblings, Vanya and Sonia, who were named after Chekhov characters by their professor parents, and Masha Hardwick, a movie star. The proverbial apple cart is upended by Masha when she shows up to the Pennsylvania house Vanya and Sonia live in (which Masha owns) with her boyfriend Spike.

As played by the fabulous Rachel Varley, who made her Highwood debut, the ”famous and interesting” Masha complains about the terrible movies she’s made and brags about her extraordinary lifestyle. The question she ponders is: Will she or won’t she sell the house?

The always four-star Kecia Campbell committed multiple acts of scene theft in her role as Cassandra, Vanya and Sonia’s maid. Her character seemed to be like the Greek mythological character Cassandra, “cursed with a second sight” and was keen on timely and comical predictions. Campbell was seen earlier this year as Mrs. Soames in Our Town at Annapolis Shakespeare Company.

Richard Fiske’s late-50s, would-be playwright, Vanya, was understated and thoughtful with a lot simmering under the surface. His character-revealing, curmudgeonly monologue was quite an exploit.

Sonia was played with a manic nervousness by Margaret Condon (seen recently in Quiche Isn’t Sexy at The Colonial Players). She made Sonia’s kvetching about being adopted and her fear of loneliness come through on an emotional level.

Spike (Thomas Shuman) aka Vlad, Masha’s dim-bulbed boyfriend, who’s best claim to fame was almost being cast in the fictional (as of this writing) Entourage 2, was a bit of a foil–and a tease–to gay Vanya. Star-struck Nina, Vanya and Sonia’s neighbor, was played with a girlish giddiness by Amber James. Nina’s comparison of Masha to the character Norma Desmond from the classic film “Hollywood Boulevard“ among other gaffes, kept the laughs coming.

Robinson, who excelled as an actress in Highwood’s Night Mother last fall and more recently in Greenbelt Art Center’s King Kirby, was marvelous as a director. Consisting, in large part, of wooden wall studs and sans drywall, the set was adorable. The absence of drywall allowed the audience to see the players’ states of mind before they made their entrances. I loved the many Russian-themed props, including a Russian doll, a coffee-table-sized book about the Soviet Union, and a portrait of Chekov. Sets\Props Design was expertly done by 9th Grader Owen Gibson, 5th Grader Fiona Lipczenko, and 7th Grader Nyahna Johnson. 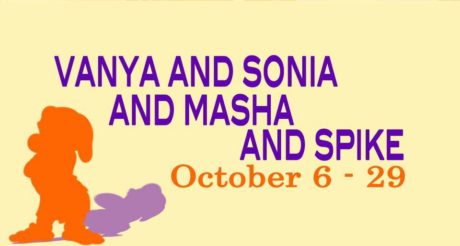