Tap dancers are family. As family they gather together, catch up, trade stories, reminisce, honor their forbears and simply, yet profoundly, enjoy each others’ company. Saturday evening’s sold-out Lotus reunited a half-dozen dancers who initially connected in the rehearsal studios and on stage in the 1995 Broadway groundbreaker Bring in ‘da Noise, Bring in ‘da Funk. The musical, conceived by director George C. Wolfe with choreography by Savion Glover, pushed the percussive dance form into the limelight, showcasing its deep and sometimes dark roots in the ignominious slave history that continues to haunt our nation. The young, then-unknown dancers at the time, were just discovering that tap could speak deeply of America’s racial bias and slave history.

Today those dancers are at the heights of their careers. Lotus brought them together for one night, but the reunion wasn’t as much about looking back over the decades, but of forging ahead.

Joseph Webb, a Maryland native who most recently directed the American Embassy of Dance studio in Northwest Washington, D.C., brought his peers together as both a celebration and a meditation on the vitality and cultural import of tap. In the just-re-opened Terrace Theater – now wrapped in warm undulating wood – these six dancers hoofed their hearts out, drawing on the glorious tap dance history of their forbears – teachers, mentors, friends and family who supported their dreams and got them to this point in time.

Yet there was nothing reverential for too long. In the darkness, the call and response of the Hoofer’s Line, “Ho yeah, ho yeah ho,” got the 75-minute program off to a rousing start, each dancer entering in a rumbling tattoo of rhythms to the accompaniment of the Lafayette Harris Jr. Quintet. The roar of paddle-and-rolls was a thrilling backdrop as each dancer showed their stuff – a taste of what was to come. This opening gambit reached its denouement as the six wound themselves into a close circle before whipping out a turn that went to blackout.

Tap, like many improvisational dance forms, has a strong competitive streak and old school hoofers often issued a “challenge” to other dancers in the line or circle to try to best them. Here, these six took on the challenge with a sense of camaraderie, egging one another on with friendly encouragement. The result: terrifically complex rhythmic conversations, syncopated dialogues that speak of past, present and future all at once.

The six performers brought together for Lotus teemed with energy, their footwork a succession of fiery pyrotechnics and calmer meanderings exploring the rhythmic universe. Each exhibited distinctive traits and I’m willing to bet that with a bit more time, one could as readily identify them by their beats in the dark as on the warmly lit stage.

There was Omar Edwards, the showman of the group, radiant in his stark white suit. And Derick Grant with a knit watch cap atop his head, the workhorse of the sextet, in t-shirt and jeans. Joseph Webb, his man bun bobbling atop his head, a city-slicker scarf around his neck, exuded cool, calmness in his dark shades. An attractive combination of uptown and downtown, Jason Samuels Smith is the swell of the group, sharply attired in a three-piece blue business suit and shiny gold tap shoes, he can hit hard, and slum it, but also, demonstrate a lightness. The intellect of the gang is lanky, understated Baakari Wilder, another local, who co-directs the youth company Capital Tap and teaches at Knock on Wood studio. In his trademark purple tap shoes he’s the deep listener, and when he puts foot to wood, it’s with a studied approach, his head cocked slightly to the left, his shoulders hunched, his brow furrowed. Finally, but most certainly not least, Dormeshia Sumbry-Edwards shows the feminine side of what can sometimes become a boys’ club of heavy hitting tap. But she’s no shrinking violet. In fact, she’s easily as fierce as the men, her waist-length braids whipping behind her, her upper body grace belying the power pumping from her feet. Occasionally in heels, Sumbry-Edwards recalls the popular adage: “Sure Fred Astaire was great, Ginger Rogers did everything he did, but backwards and in high heels.”

The evening incorporated voiceovers from some of the performers, talking about why tap was so vital to them and who they wished to credit as mentors and inspiration. These monologues were often quite moving – the only problem was at times it was hard to discern all that was said over the band and the taps.

Edwards’s recorded monologue spoke about his not always easy journey, but, he said, “it wasn’t as bad as it could have been … every day I love to hear the sound of metal hitting wood … and I still dream about tap dancing.” He also removed his white patent leather tap boots and, barefoot, paid tribute to his Liberian-born mother, who only received her first pair of shoes at 14. Shortly after, he grabbed a microphone and urged the audience into a clapping call-and-response, allowing those sitting in the dark a moment to trade rhythms with a few of this generation’s best tap dancers. Wilder, the most reserved of the six, spoke on tape about his support system — his mother, his family and his faith — and how he has slowly but steadily grown into his gift. Webb stated that for him tap is “a healing art form.” He acknowledged the gratitude he held for his master teachers, including Lon Chaney (the tap dancer), Gregory Hines, Diane Walker and others. Then his solo paid tribute in steps – the smooth Chaney-isms, the flashier speed of Hines, the lilt of Walker, the playfulness of Buster Brown. Grant spoke, too, about his admiration for the work of Underground Railroad conductor Harriet Tubman, who not only sought her own freedom, but helped many others escape the hardship of American slavery. Grant dances in the footsteps of those who came before.

Also beautiful about tap is that it is as much a musical form as a dance form. As the band played Branford Marsalis’s “Mo Betta Blues” longtime friends – they call themselves brothers – Webb and Wilder syncopated the piece with their quicksilvery taps. Samuels Smith sliced up rhythms like a birthday cake performing to Miles Davis’s “Joshua” and Lee Morgan’s “Ceora.” Webb followed trombonist Reginald Cyntje and trumpet player Joseph Jamaal Teachey on a sharply cut swath of light reminiscent of a New Orleans Second Line. And the rousing, and too short, closing number that brought the gang of tap friends together featured Lester Young’s “Lester Leaps In.”

Each of these dancers had plenty to say about the form, their mentors and what tap means to them. They also let their feet and bodies do the talking. Edwards with high kicks, and Nicholas Brothers stunners like a flip into a jazz split. Grant followed a hard hitting section with some butterfly-like ripples on the floor. Samuels Smith brought a high-powered ease to his riffs and more than a little dazzle with some tricky balances, slides and rolls. Webb offered lighter flashy footwork along with his million dollar smile. Sumbry-Edwards could play the flirt, especially at the end in her sequined little red dress, but she did a stunning riff on time steps that could put a mathematician to shame with its numeric complexities. Wilder, the lightest of the dancers, sometimes recalled old time soft shoe in his easygoing lilt.

This format, which also featured projections of unnamed portraits – sketched, painted and photographed – of African Americans from the past, seems to have been drawn from last fall’s DC Metro Tap Roots program at Dance Place. This time with more dancers, it’s more fleshed out, but there’s still more to do, more stories and experiences to be shared. As the six dancers and the musical quartet stitched out their rhythmic patterns in shifting solos, pairings and groupings, the moment became one of tribute to the multitude of unnamed, and perhaps nameless, ancestors whose lives and struggles made this moment of celebration and homage possible.

Throughout the evening, tap aficionados nodded in recognition of steps, patterns, rhythms and riffs that drew upon the work of beloved tap masters, including the likes of Buster Brown, Lon Chaney, Gregory Hines, Diane Walker, Sandman Sims, Jimmy Slyde, the Condos Brothers, the Nicholas Brothers and Jeni Le Gon, leaving out many more than I could name.

Webb called this evening Lotus to evoke the flower that, he wrote in the program “grows in the mud ….Tap dance, with deep roots and tradition in African dance, has not always been a just and beautiful experience in America.”

But it’s important to note that Lotus was not just an evocation of the past. It was a look to the future. These six dancers are at the peaks of their careers and they dance in acknowledgement of the lineage they carry in their muscles and bones, their sinews and souls, but they are ever moving forward, forging their own paths. It’s America’s story, told through dance, through steps in time, rhythms that speak of ancient tribal calls and modern hip hop stances. That is the story of tap dance – one of our prized indigenous American dance forms – that remains rooted in its past as it fearlessly pushes forward. . Let’s hope these dancers and musicians can build this one-off into a touring production that would bring this vibrant generation of tap masters to further attention around the nation and beyond. Their voices and feet need to be heard. 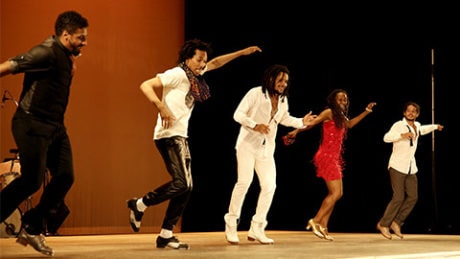 Lotus played on October 7, 2017, at The Kennedy Center’s Terrace Theater – 2700 Street, NW, in Washington, DC. Sold-out performance was one night only.