The Florida Project covers part of a summer in the life of the denizens of motels along US 192, a stretch of highway right around the entrance to one of Walt Disney’s places. It is a world whose architectural style feels like a distorted echo of Mickey’s magical wonderland, a style that is outlandish and bright, featuring the kind of muscular eruptions of shape and color that define the American psychedelics Ken Kesey and his Merry Pranksters used to trip out to to.

Sean Baker photographs this world in a way that feels in tune with the riot of colors and shapes populating this skyline, made up by these buildings and the forest of signs, lights, and traffic signals grown thick around such the road. The government insists on beautifying this stretch of highway by tearing such structures down (replacing them with cookie cutter retail outlets per Google Street View). “We were actually losing locations,” said Baker during our interview (he and co-writer Chris Bergoch have been working on this film since 2011). The eye-popping vistas that Baker carves out of this landscape makes me feel like his idea of beauty is a lot more interesting than the government’s.

Baker and Bergoch have created a rich tapestry about the community in these motels, though “motel” is a loose term. Most of them actually live in these places, even though every now and then they have to spend the night somewhere else because people can’t like technically live in motels according to America’s (often insane) patchwork of rules that make life unnecessarily hard for people who don’t have enough money to ignore them. Two of the most colorful threads in this tapestry belong to Moonee, played with profound aplomb by Brooklynn Prince, a spirited young girl who creates camaraderie wherever she goes, and her mom, Halley, played vividly by Bria Vinaite, (both newcomers) who live in a motel called The Magic Castle.

Moonee brims with life and imagination, creating ways of passing the time for her and her coterie, some of which are more, uh, destructive than others. Our first adventure with Moonee after the outrageously vibrant titles play out on a purple wall to the ironic strains of “Celebrate!” includes Moonee and the gang screaming obscenities at a car owner, whose ride they have just had a good old time spitting on. Moonee’s behavior soon becomes contextualized when we meet her profane and forward mom. Right from the first scene, we can feel Baker’s compassion and nerve. The Florida Project captures colorful people, with rough, rough edges in a compassionate way that is vital and authentic.

Moonee and her friends, Scooty and Jancey (who the group picks up after Jancey’s guardian forces Moonee and co to clean the windshield of that car they just expectorated onto) exist in a precarious world, not that they are aware of that. Much of Moonee’s day involves waiting for scraps from the restaurant where Halley’s friend Ashley works (Mela Murder, another charismatic newcomer who shines in this film) or traipsing down 192 to beg and cajole for ice cream or just finding some action around the Castle, often to the annoyance of the good-natured motel manager, Bobby (Willem Dafoe doing some of his finest work ever – hold that thought), who is busy all day with more than just the consequences of the boisterous energy of the children. Baker presents all of this activity with stunning fluidity, which you would expect from the filmmaker behind the kinetic Tangerine. The switch to 35mm lets Baker scale up and in, which he uses to great effect to carve out moments of contemplative grace, both by stepping back to drink in the broader landscape and by pushing in to focus on heads and faces.

Baker reeled off the list of the very practical reasons the script he and Bergoch created had to provide a strong spine during shooting to me: the short time allowed to work with child actors, the hot summer sun in Florida, 35mm. But within the highly structured spine of the script/shooting schedule, Baker creates spaces for his collaborators to own their roles. Sometimes the contributions are small (but impactful!), like Brooklynn’s ad lib at the end of a conversation the kids have over a melting ice cream cone. “The melting ice cream scene is word for word except for . . .” Baker tossed it over to Brooklynn during our conversation: “You’re not welcome!” Baker smiled, “No one expected that.” Other scenes demanded almost total improvisation, like the many scenes of Halley (sometimes with Moonee) selling perfume in front of golf clubs and nicer resorts. These were filmed “Candid Camera” style; prospective customers had no idea they were on camera until they were being chased down to sign releases.

Other scenes demanded almost total improvisation, like the many scenes of Halley (sometimes with Moonee) selling perfume in front of golf clubs and nicer resorts. These were filmed “Candid Camera” style; prospective customers had no idea they were on camera until they were being chased down to sign releases. Vinaite described the situation of trying to sell perfume to strangers as a bit surreal and almost mortifying, it was so outside herself. She was still disappointed that the only people who bought anything were the ringers they sent in when Halley had to succeed.

Some of the sweetest and freshest moments in the film come from improvisatory spaces. There are repeated scenelets of Moonee taking a bath (something that takes on a darker meaning later in the film), which are just pure wonderful. “He handed me these mermaids and said ‘Wash ‘em’ . . . Ok.” Brooklynn is an embodiment of being up for anything. It’s something Baker noticed right away. When she was paired with Christopher Rivera (Scooty in the film), he started doing push-ups to psych himself up for the audition. Brooklynn joined in the exercise by doing squats, a form she learned watching her father. “Christopher started doing push-ups and I was like . . . ‘Mmm. Ok’” said Brooklynn. Her vibrancy and zest for life sing out throughout her performance, never more so than during a bittersweet montage of Moonee devouring nearly every possible type of food at a buffet in a local resort where Halley takes her ahead of a rough time Moonee doesn’t know is coming. Baker parks the camera in front of Brooklynn and just drinks in her many inspired ways to dispatch the huge array of food on her plate. “I’m an eating fiend,” explained Brooklynn, and gestured toward her dress, a Lisa Frank inspired fantasia on ice cream cones and neon, a good dress for a hot day in DC.

Baker deliberately avoids the usual Hollywood casting pool and process. “Think of every 24-year-old A-lister, that’s who they wanted to cast” as Halley. Baker discovered Vinaite on Instagram: someone reposted one of her videos at just the right time. “Whoever reposted that, they deserve a bouquet or something,” Vinaite joked. There is no questioning her energy and the freshness of her performance (or her evidently affectionate connection with Brooklynn). Casting is central to Baker. “I lay awake at night if there is a weak link in the cast.” In a cast full of feature film debuts, children, and acquaintances (ok, Macon Blair isn’t exactly any old acquaintance, but still), Baker asserted “there are no weak links in this cast.” The clearest evidence of that is Dafoe’s performance. Dafoe an acting heavyweight with plenty of scenery chewing on his resume, but it never feels like he is in a different movie. Dafoe’s work is of a piece with Brooklynn’s and Bria’s and the rest of this marvelous cast. It’s impossible for me not to agree with Baker wholeheartedly.

The Florida Project is a clear-eyed, incisive, and compassionate look at life in a marginalized community, where many lives teeter on the brink of oblivion (and some fall). Baker and company don’t sentimentalize or gawk at this community; the film doesn’t feel like privileged outsiders directing the traffic of our attention around. There is a rootedness and authenticity to the world they create and the stories they tell. The children’s romp through some abandoned condos felt like it had been ripped from the memories of my own youth, when I made construction sites my playground years and years ago.

The Florida Project is vital and beautiful without losing sight of the roughness of these stories, it is tragic without being treacly. If anything the film simmers with anger and frustration; perhaps from the consciousness of how the wealth, opulence, and privilege down the road hovers over these hardscrabble lives, exerting pressure on them, pushing them out of this part of paradise. The Florida Project is a rich character study of people in a surreal landscape, that strives to capture a precarious community where poverty’s burdens are heavy but which pulses with life and beauty nevertheless.

I am grateful to A24 and PR Collaborative for arranging an opportunity to interview Sean Baker, Bria Vinaite, and Brooklynn Prince, busy people who were gracious enough to share some of their time with me.

Running Time: One Hour and 55 minutes. 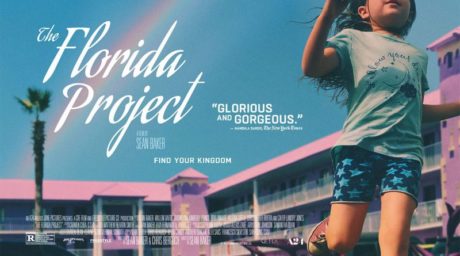 The Florida Project opens on October 13 at the Landmark family of cinemas, as well as other venues. It is rated R for language throughout, disturbing behavior, sexual references and some drug material.