It’s not unusual for concertgoers to be greeted by the sounds of orchestra members tuning their instruments, so commencing Thursday night’s concert with Kennedy Center Composer-in-Residence Mason Bates’s Auditorium, whose opening scrapes, bleats, squeaks and toots could easily be taken for those of an orchestra warming up, was both genial joke and masterstroke.

Making his debut with The National Symphony Orchestra, Spanish-born Conductor Juanjo Mena, Chief Conductor of the BBC Philharmonic in Manchester, elegant in tails and passionately eloquent in gesture and carriage, was in full command, not of the orchestra, but in full partnership with the orchestra. And not only here, but in the two thoroughly divergent, yet somehow essentially – musically, creatively or emotionally – complementary selections that would complete the program: Samuel Barber’s Piano Concerto, Op. 38, and Tchaikovsky’s Symphony No. 6 in B minor, Op. 74, the “Pathétique.”

Auditorium, scored for woodwinds, reeds, brass, timpani, electronica (in his absence, Bates confided in an interview, “the orchestra simply assigns the percussionist to play laptop”) and strings, itself contains a stylistic dichotomy: “… a work,” writes Bates, “for two orchestras – one live, and one dead,” one a modern orchestra, the other a Baroque ensemble, the latter’s ghostly presence represented, at once cinematically and counterintuitively, by means of the 21st-century “instrument.” The other instruments are certainly no slouches, the horns and winds going from finding their inner snake charmer to showing off their crescendo skills, the strings suitably spine-tingling with icy pizzicatos, swooping glissandos and deep-throated rumbles. With Halloween just weeks away, few works would be more fitting.

Lots of excitement and discord, to be sure. And yet: The work approaches its end with a surprising stillness. At peace? Or, perhaps, resigned?

The same question could be (and indeed has been) asked of the concluding piece. But first: the bridge between them, which linked the two more than I ever would have imagined, while also thrillingly and incisively demonstrating Classic and Romantic period specialist Garrick Ohlsson’s more contemporary chops.

Barber’s sole piano concerto (whose brief program notes, unlike the musically and historically elucidating ones on the other two works, say nothing about the structure or character of the piece itself, or the genesis of its composition), for which he won his second Pulitzer Prize, begins with an Allegro appassionato whose quicksilver runs and trills, under Ohlsson’s hands, flew like swift-flowing streams of thousands of slippery-smooth, tiny pearls. His nimble fingers – there had to have been hundreds of them; how else could so many individual notes have been so piercingly sharp, so meticulously played, and so distinctly heard – hammered relentlessly, turning the pearls into silver-steel balls, then repeatedly clawed and seized the keys, his hands rippling and roiling across the keyboard, suggesting the menacing approach of rumbling thunder. The movement ends with a startling blast, here the piano and orchestra in perfect, hair-raising sync.

The second movement, the well-named Canzone, or song, is a light and graceful contrast to the first, the NSO woodwinds’ sweetly clear calls evoking birds and woodland greenery, the orchestra’s reverie joined, as if emanating from a single soul, with Ohlsson’s delicate trills and gentle pianos.

It’s probably best that I not spoil the third movement for you – there is one more chance to see and hear this concert (today at 3:00 p.m.) – so I will just say that it is, well… terrifying. And that the Mena-Ohlsson-NSO ensemble pulls it off with élan, pulling the audience, inexorably and electrifyingly, along with them.

Whatever one’s misgivings or trepidations regarding music in which discord seems to be the main course rather than a rare spice, Ohlsson’s prodigious skill and seamless concord with Mena and the orchestra, here and throughout the night at the top of their game, made it a performance to treasure. It may also – coming on the heels of the Mason – have made some of us more willing to explore, and even engage, rather than reflexively avoid, music which we once might have.

The same, of course, cannot be said for the final selection, and its composer’s final symphony, in a sense, closing the concert’s temporal, musical (and, possibly, metaphorical) loop: Tchaikovsky’s beloved Symphony No. 6, the unfortunately named (for English speakers who reflexively translate foreign words into their English-language cognates) “Pathétique.” In this case, though, an easy mistake to make: While the original Russian Pateticheskaya means not “pathetic,” but “passionate” or “emotional,” the French word, by which the concerto has come to be known worldwide, and whose principal meaning is the one Tchaikovsky intended, has come, in its English translation, to more commonly carry the second one.

Any doubts as to the composer’s intentions should be quickly dismissed by the music. It would be hard to find self-pity in this work, but there is plenty of passion and yearning. And Juanjo Mena and the NSO dug deep within it, and, I would hazard – from the impact it had on an audience so eager to show its appreciation that when a few eager beavers began applauding even as Mena was standing, head bowed as if in benediction, arms raised, toward the hushed cellos, it quickly spread to engulf much of the audience – also, deep within themselves.

From the opening Adagio – Allegro, ma non troppo, with its familiar second theme, a warm melodic strain popularized in hit songs of the 1940s and ‘50s, and its volcanic, exultant, triumphant fortissimos, to the tragic final Adagio lamentoso, its hesitantly inquiring, poignantly hopeful, then insistent, then despairing strings, filled with love, loss, and quiet resignation, Mena and the orchestra seemed to be communing so profoundly as to be almost a single unit. This could be due in part to the familiarity of the piece; but it was uncanny the way the music at times almost appeared to be emanating from his fingertips, so consummate his and the players’ communion, so nuanced their mutual apperception and assimilation of his smallest gesture, and his attention to theirs in turn.

It also was a sweeping, if by dint of time implicit, embrace of the works that had preceded it in the program but would follow it in chronology, its echoes of death and warring emotions ending with an almost inaudible stillness recalling the Bates piece, its sweetness interrupted or overtaken by wild bursts of frenzied, frustrated passion or fury, the Barber.

On all counts: an emotionally challenging, yet emotionally satisfying, thought-provoking, absolutely exhilarating program. 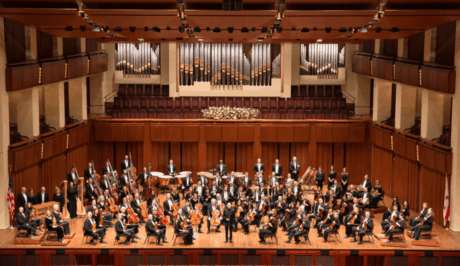