Strong writing, passionate acting, and a meaningful purpose combined to make Judge Me Not a gem of a show. An assemblage of monologues around a common theme, the show came with a message: Do not pass snap judgment on others whose life story you know nothing of. As staged two nights only in the DC Arts Center black box in Adams Morgan, Judge Me Not told a series of compelling stories that made that point persuasively. The result was a performance impressively rich in talent and integrity. 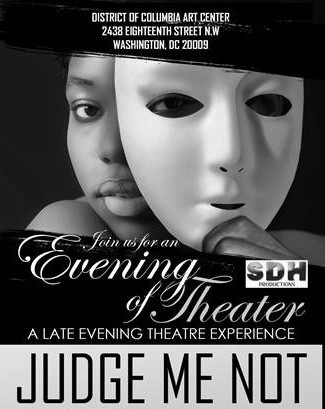 Taking inspiration from Amiri Baraka, Writer and Producer Indigo (also known as Sheena D. Horne) conceived Judge Me Not as a way “to incite a little more compassion and connectedness.” And Director Ani Dae, who “believes in living what you love by using your gifts to serve a greater purpose,” gave the show a shape and pace that achieved a fine balance between comedy and pathos. 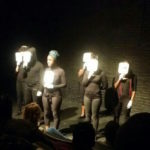 In a choreographed prologue, the acting ensemble entered holding up signs in front their faces with labels of derogation such as SINNER, SLUT, and THUG. This scene functioned as a pointed challenge: to find out who’s behind each mask. 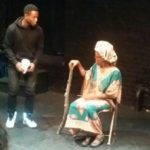 Sheena “Indigo” Horne came on in a colorful caftan and headdress as comic-crotchety Grandma Ole Day, hobbling on a walking stick. Acknowledging that she’s a recovering alcoholic and has been married for 2,000 years to a man with a head so big it can shade her from the sun. Grandma interacted with, and cracked up, the audience. Meanwhile, she carried on a jokey scolding with her mock-put-upon grandson Tyler (Hassan Bangura).

Then began the serious monologues, which in content and performance were gripping. 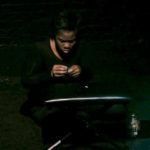 Tiffany Strother as Sammie entered strung out and begging for money—exactly the sort of street person folks would try to avoid. Then she told a harrowing story of hardship: With her law degree she got a good job but was laid off and couldn’t get another. Then she lost her home and became poorer and poorer. While living in a shelter she was raped. Then she got addicted to drugs…

Calvin D. Tucker Jr. as Poetic performed a rap-like monologue about growing up “in a world that always hurled on a black man.” Included was a poignant anecdote about a white child who got a really bad sunburn and began then to resent those whose melanin protected them. 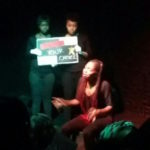 Alyse Hamilton as Amber told of needing to terminate her pregnancy, against a loud chorus of anti-abortion hostility portrayed by the ensemble (dressed all in black except for white gloves). She explained to them why she was needing an abortion: “I’m pregnant by my daddy.” She then chillingly portrayed his voice as he was molesting her.

Ani Dae as Momma D told of bringing her nine-year-old child with her when she went for a job interview. She trustingly asked a receptionist to watch the child until the interview was over. But when she came out, her child was gone, abducted by a man who posed as the father. Her horror and anguish were very affecting. 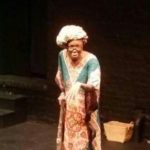 Before and after the intermission, Indigo as Grandma Ole Day returned for more banter with the audience. Her schtick was perfect comic relief. In no way did it diminish the gravity of the monologues To the contrary, it heightened the stories’ impact.

Latashia Carney as Ms. Nell told of being molested by a white babysitter’s boyfriend—and while he did it, the babysitter pinned her down. After that trauma, she became mute. 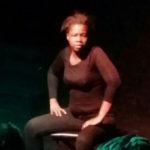 Sheena “Indigo” Horne as Nikki told a story of alcoholism. This Nikki character was so different from Indigo’s Grandma Ole Day character, she was barely recognizable as the same actor. It was a striking transformation. 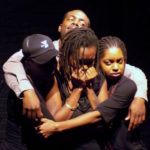 Kelvin Terrell as Malcolm portrayed a character who could easily be pegged a deadbeat dad (he’s had five children by four women). No one ever showed him “how a man is supposed to be.” But he changed and became “a better man” when he recognized his own father’s failure to be one.

Latashia Carney as Ms. Brown told of being in prostitution from financial desperation. “I did what I had to do for my children.” 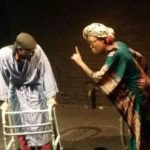 Sheena “Indigo’ Horne as Grandma Ole Day returned joined by Calvin D. Tucker Jr. transformed as funnily feeble Grandpoppy—a comic duo who gave the audience much appreciated respite from all that had been heavy to hear. 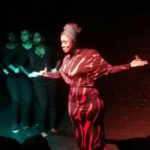 In a final solo performance, Ani Dae as Lady Diva entertained the audience as if in club act on the theme of overcoming others’ judgments: “Your past is not equal to your future. You are the only person that can judge your past.”

Grandma Ole Day was then joined by the ensemble, whose earlier masks of disparagement were flipped to reveal messages of empowerment such as STRONG and VALUABLE.

By the end Judge Me Not succeeded in its intention outstandingly. All initial assumptions about the characters the writer had scripted—and the cast had made us recognize—had been called into question, subverted by theatrically truthful story-telling.

Judge Me Not is a moving, enjoyable, and valuable show, and it deserves a rerun.

Running Time: Approximately one hour 45 minutes, including one intermission. 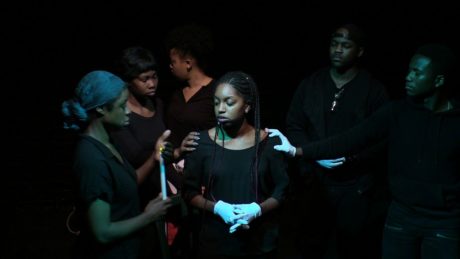