Known and beloved for his impeccably smooth baritone voice, suave stylings, and debonair elegance, Nat King Cole was a musical icon and TV trailblazer, making his indelible mark on our culture with a series of Top-Ten hit recordings (including such now-classic favorites as “Straighten Up and Fly Right,” “Mona Lisa,” and “The Christmas Song”) and a prime-time half-hour variety show on NBC – the first to be hosted by an African-American performer – before his untimely death from lung cancer in 1965, at the age of 45. Despite his widespread popularity and success, his life and career were not immune to the seething racial tensions of mid-century America. A hateful racist epithet was burned into the lawn of his home in an exclusive Los Angeles neighborhood in 1948; he was the target of an on-stage assault and attempted kidnapping by four white supremacists in Birmingham, Alabama in 1956; members of the NAACP denigrated him as an “Uncle Tom” for his supposed lack of commitment to the Civil Rights Movement (though he had in fact contributed privately to activist organizations); and his groundbreaking television show was cancelled after a year’s run in December 1957, ostensibly because of its trouble in attracting national sponsorship and high ratings in the segregated South. Through it all he remained a class act – always “such a gentleman in this rough world” – responding to his vitriolic detractors with his characteristic calm and control, and eloquently encapsulating the experience of his TV cancellation with the incisive observation, “Madison Avenue is afraid of the dark.” They didn’t call him “King” for nothing.

Of course all of that is well-known to Cole’s fans (of which I have been one of the biggest since early childhood) and available to readers of his biographies, so if you’re expecting a traditional bio-play or a typical jukebox musical in Lights Out: The Nat “King” Cole Story, you will be very surprised. Commissioned by People’s Light in Malvern as part of its NPF (New Plays Frontiers) program, the world-premiere work, written by Colman Domingo and Patricia McGregor (who also directs), is a highly inventive theatrical vision that combines well-researched historical facts about the man and his era with a selection of his most popular hits, in an absurdist/existentialist fantasy that explores what the star might have been thinking, feeling, and stifling at the time of his final Christmastime show before a live audience, beneath his ever-cool surface.

Set in the TV studio and dressing room fifteen minutes before air time, we see Cole subjected to the degradation of his natural skin tone being lightened with white powder by the network’s make-up artist; insensitive racially-charged comments intended as jokes by his colleagues; insulting stage directions to “keep it clean” and to “keep a distance” from his female guests; and the very visible Nielsen meters that register viewers’ reactions – making the actual audience at People’s Light uncomfortable, empathetic, and complicit (each seat in the theater is furnished with a faux Nielsen ratings box) in his intense fever dream and the still-relevant socio-political issues it raises. There are revelatory flashbacks to his youth and family, ridiculous scenes of over-the-top buffoonery to entertain the “silly white people,” and nightmarish re-imaginings of a beer commercial and “Twas the Night before Christmas” that bespeak the traumas he endured during a deeply troubled and oppressive period.

Dulé Hill leads a stellar cast in the titular role, capturing a full range of conflicting emotions, delivering pitch-perfect renditions of his character’s famous jazz-infused pop songs and sophisticated style, and smoking and coughing from the omnipresent cigarettes that would ultimately claim his life. Daniel Watts is thoroughly entertaining as the vivacious Sammy Davis Jr., who interacts wildly with his castmates and the audience, invites the at-first-hesitant Cole to a tap-dance duet to “Me and My Shadow” that brings down the house (choreography by Jared Grimes), and advises his more restrained friend to “go out with a bang” from his TV show. Zonya Love as Nat’s mother Perlina provides another show-stopping number with her powerhouse vocal on “Orange Colored Sky,” as does Gisela Adisa in her dual roles as the seductively purring Eartha Kitt and Nat’s daughter Natalie, with whom Hill performs the aptly-named “Unforgettable” (here alive together, not posthumously on tape, as in the hit track of 1991). Rounding out the cast and giving fine support are Jo Twiss, Marc D. Donovan, and Owen Pelesh as the TV crew, Rachael Duddy as singers Peggy Lee and Betty Hutton, and Dayshawn Jacobs as both the young Billy Preston and the young Nat, who takes up music following an unprovoked childhood attack on him (fight direction by Samantha Reading).

The ensemble is backed by a terrific live band (representing Nelson Riddle and His Orchestra, who played with Cole), with Mark Cristofaro on drums, Bennie Sims on bass, Monette Sudler on guitar, and Music Director Ryan Slatko on piano, and John McDaniel providing authentic orchestrations, arrangement, and music supervision. A first-rate artistic design, with a period-style set (Clint Ramos), costumes (Katherine O’Neill), wigs and hair stylings (J. Jared Janas), and evocative lighting (Alan C. Edwards) and sound (Alex Hawthorn), recreates the look and feel of the Fifties and the surreal quality of a dream.

Lights Out: The Nat “King” Cole Story pays homage to an outstanding talent while condemning the struggles and bigotry he never should have faced with sardonic wit, suppressed rage, unnerving imagery, and the unforgettable music that made him a legend. 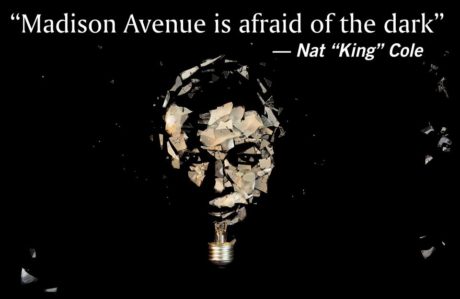