One of the most imaginative musicals ever to hit the Broadway stage, the Tony Award-winning Pippin, with music and lyrics by Stephen Schwartz and book by Roger O. Hirson, is now dazzling audiences in a high-energy production at the Ritz Theatre Company. Directed and choreographed by Brian Rivell, with vocal and music direction by Marc G. Dalio, a lively and entertaining cast of eighteen, in the guise of an itinerant troupe of circus performers, sings, dances, and enacts the Vaudevillian-style play-within-a-play on the eponymous 8th-9th-century Carolingian Prince and his quest for meaning and happiness.

Loosely based on the real-life historical figure, the metatheatrical coming-of-age story follows the peregrinations, growing pains, and existentialist angst of Charlemagne’s son through war and women, revolt and reign, longing for more but ultimately finding contentment in the ordinary. Filled with sardonic laughs, worldly temptations, and bawdy innuendo, the surreal fantasy, overseen by the charismatic Leading Player, presents a metaphor of life that is at once amusing and disturbing, absurd and magical, enticing and sobering, provocative and didactic.

While using the conceit of a traveling carnival, Rivell eschews the daredevil circus arts and acrobatics introduced into the show’s 2013 Broadway revival in favor of classic song-and-dance segments inspired by Bob Fosse (Director and Choreographer of the original 1972 production), incorporating everything from jazz hands to a chorus line. Franklin Anthony has all the moves as the charming and manipulative Leading Player – a Mephistophelian ringmaster who addresses the audience directly with his narration and gives us the old razzle-dazzle as he leads the ensemble in the show’s famed opening number “Magic to Do” and the signature “Manson Trio” dance routine with straw hat and cane.

With his outstanding vocal and acting skills, Blaze Dalio turns in a stellar performance in the titular role, capturing the naïve idealism and inexperienced awkwardness of youth in his soft-spoken gentle demeanor and sincere pitch-perfect tenor, delivering beautiful renditions of the soul-searching “Corner of the Sky,” “Morning Glow,” and “Extraordinary.” Though now just a freshman at Rowan University, he is, in fact, an extraordinary talent to watch, and to watch for in the future. Dalio is well matched with Lauren Parsons as Catherine, the hard-working widow and mother who finds the despondent Pippin and loves him (and the circus performer who steps out of character to take stage direction and to question her role), bringing her fine voice to solos in “There He Was” and “I Guess I’ll Miss the Man” and to her heartfelt duet with Pippin in “Love Song.”

The show’s ensemble of Players (Frankie Rowles, Caleb J. Tracy, Barbara Barry, Julia King, Martha Marie Wasser, Jennie Knackstedt, Kaylan Wetzel, Tom Shaw Jr., Katharina “Katie” Muniz, and Darrell Wood) and supporting cast members also turn in engaging performances as the archetypal carny performers (e.g., the Tattooed and Bearded Ladies) and historical figures. Matthew Weil is laughably proud and tyrannical as Charlemagne; Joanne Mullin McBride is believably devious as the King’s conniving wife Fastrada; Andrew Spinosi as her son Lewis is a risible “strong and stupid” egotistical brute; Colin Rivell is both perturbing and charming as Catherine’s young son Theo; and Ellen Sheinkin is delightfully sassy and brassy as Pippin’s grandmother Berthe, who advises him, on a high-flying swing, to live his life to the fullest. Her soaring number “No Time at All” is a crowd favorite, inviting the audience to join in on the chorus and reminding us all that it’s “time to take time” and “time to start livin’” before it’s too late.

A terrific artistic design enhances the action, with spectacular sparkling circus costumes, royal robes and monks’ robes by Tina Marie Heinze, evocative lighting by Jen Donsky (the dark bathing red for the writhing orgy scene is especially effective), and a period-style set by Bruce A. Curless, with wooden platforms and vintage circus posters on scrims (which identify the characters behind them) and employing the actual balcony box of the historic venue for some of the scenes with Charlemagne. Schwartz’s jazz-infused score is performed with apropos spirit and syncopation by a live six-piece orchestra (Marc Dalio, Brian Bacon, Chris Weed, Michael Haggarman, Will Currier, and Derrick Banks).

My advice: Take the time now to enjoy The Ritz’s impressive production of Pippin, before it’s gone in “no time at all!” 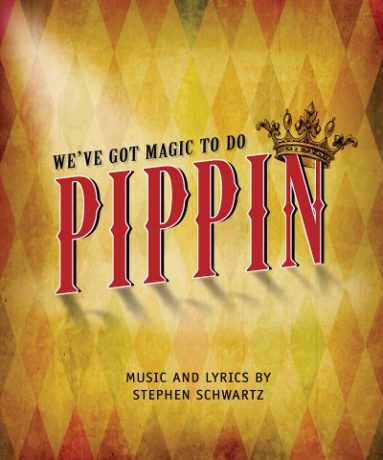