Compass Rose Theater’s production of Inherit the Wind is a powerful work of theater. Written by Jerome Lawrence and Robert Edwin Lee in 1955, it dramatizes the famous “Scopes Monkey Trial” of 1925, in which the teaching of evolution was put on trial. Spencer Tracey and Gene Kelly starred in a 1960 movie version. Directed by Lucinda Merry-Browne, it feels incredibly relevant today; as Browne writes, “Who would expect that in 2017 we would still be having the argument of creationism versus evolution, of science versus dogma?”

Gary Goodson plays Matthew Harrison Brady, famous prosecutor and defender of creationism, with power and Biblical authority. He speaks as a preacher, confidently and firmly, his speeches seemingly spontaneous. When examined by Henry Drummond (Andy Clemence), he begins calmly, resting his arm on the witness stand. His most powerful, memorable moments come when he loses his temper; his face flushes red, anger filling his voice. At one time he strikes his palm with a fist while listing the books of the Bible. Only once, towards the end, does he have difficulty speaking, the words coming fitfully, and the cast, normally paying rapt attention to his speeches, file offstage in pairs. He is a powerful, forceful presence onstage.

Andy Clemence plays defense attorney Henry Drummond with conviction and strength, as well as a good sense of humor. Even with the case stacked against him during the trial, he still fights passionately for his client, arguing that “the right to think is on trial here.” He speaks like a lawyer, and watching him question witnesses, confront objections, and pursue his arguments makes for fascinating theater. He and Goodson are perfectly matched, and some of their strongest performances come when he puts Goodson on the stand and cross-examines him. Their quick back and forth, and swiftly-changing tactics responding to each other’s questioning is absolutely riveting. At the end, he stands alone, holding a Bible and a copy of Darwin’s Origin of Species, a fitting final image.

Daniel Prillaman plays Bert Cates, the schoolteacher charged with teaching evolution, with great complexity. At the start of the play, in prison, he defends his actions, asserting his rights. He is less assured during the trial, asking Drummond at one point if he can plead guilty. When he learns his love interest Rachel (Katherine Boothroyd) will be forced to testify against him, and reveal his questioning of religion that he shared with her, he is terrified, and races out of the courtroom. He has a passionate outburst at one point in the proceedings, loudly declaring his disdain for religion after it condemns a little boy to hell.

Katherine Boothroyd also gives Rachel Brown great depth. The daughter of the town Reverend (Don Myers), she is conflicted about Bert’s situation, which shows in her very body. At a prayer meeting led by her father, she stays in the corner trembling. As a witness against Bert, she grows ever more distressed when speaking about his views on religion, trying to defend him while her words condemn him. She collapses onstage, carried off by her father. She comments about Darwin, “I don’t understand most of what I read, and what I did I don’t want to.” It is a powerful performance of divided loyalties.

Andy Ingalls plays the reporter E.K. Hornbeck, with sarcasm and cynicism. Clearly based on the journalist and critic H.L. Mencken, he delivers some of the funniest lines of the play. Offering Rachel an apple, he remarks “don’t worry, I’m not the serpent.” He explains his role, “I’m not a reporter, I’m a critic.” While amusing, he usually remains in the background, commenting on the action.

Don Myers gives charisma to Reverend Brown. He whips the crowd into a frenzy during the prayer meeting, then bellows at his own daughter when she protests. It is a chilling performance

Marianne Meadows has done great work as Lighting Designer. The lights subtly shift throughout the show to reflect the ever-changing mood. When Drummond appears late at night, soft, blue light wafts over the stage, indicating moonlight, with just enough illumination to see the action.

Renee Vergauwen has done a wonderful job as Costume Designer. The outfits look appropriate for a small-town in the 1950s. Rachel starts the play in a red skirt with a white shirt, then for the trial wears a long black dress and striped white shirt. Brady wears a gray vest, black pants and jacket, and a tie. Hornbeck is distinctive in a white linen suit, purple tie, and brown hat. Drummond wears a white shirt, blue tie, and yellow suspenders. Jessie Dunlap wears a straw hat, white shirt, light-green skirt, and a white sweater. Howard begins in blue jeans and a striped t-shirt, then wears black pants, jacket, and bowtie. Reverend Brown has a black suit and tie.

Properties by Joann and Mike Gidos are simple but effective. At center stage is a raised wooden platform, which becomes the entrance to the courthouse and the judge’s bench. Various stools are located throughout the stage. A ladder leads to a second-story loft area, where much of the cast sit during the trial. Above the loft, as a backdrop, is a painting of a small southern town’s skyline, with a church steeple and government-looking clock tower.

Lucinda Merry-Browne has done a marvelous job as Director. The actors all work well together and navigate the stage and each other with ease, no mean feat for such a large cast. During the trial, they frequently gasp and comment on the action, even breaking into applause more than once. All the elements come together for a suspenseful, compelling show that seems relevant now more than ever. Be sure to catch it! 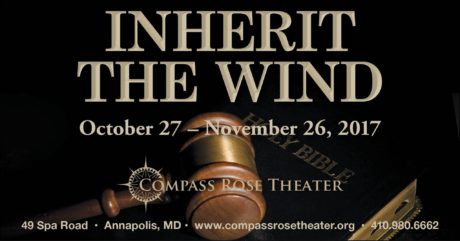