In keeping with performing plays from five different decades in celebration of their 50th Anniversary Silver Spring reached back to right after Sept. 11, 2001, to do Omnium Gatherum by Alexandra Gersten-Vassilaros and Theresa Rebeck. The play produced by Lennie Magida and directed by Bill Hurlbut deals with the aftermath of that horrible day.

The story is simple. Seven people, the majority of whom are celebrities of some sort, meet and have dinner. Suzie (Wendy Baird) is the hostess, a woman famous for her cooking and catering. She is the head of a large business and is very likely a mirror reflection of Martha Stewart. She has invited a famous author Roger (Keith Cassidy) very reminiscent of Tom Clancy. There is also the modern philosopher, talk show guest and atheist, Terrence (Ken Scudder) who recalls Christopher Hitchens to mind. There is also the intellectual Moslem, Khalid (Lou Pangaro), the intellectual but spiritual Afro-American woman, Julia, (Karen Elle), the ultra-liberal feminist, Lydia (Leigh Rawls) and Jeff (Justus Hammond), the fireman and the odd man out among all these intellectuals.

As they argue about the hot topics of that time from terrorism to Star Trek they reveal bits and pieces of their character and history. Suzie has concocted the consummate meal for her guest who mostly eat gustily as they pour glass after glass of wine. There are loud noises outside and bursts of what seems to be explosions and fire. However, only when it gets so loud and pervasive do the diners actually acknowledge it.

At the end another character is introduced, Mohammed (Omar LaTiri) who I will not tell too much about as it might ruin your surprise. He is, though, to put it mildly, the hot pepper on this feast.

This is a true ensemble production. The cast all blend like one of the tasty cuisine dishes that Suzie has created. I feel Baird’s Suzie has all the right sophistication of a food and home décor designer but just the right amount of insecurity of a middle-class maven who sudden became prosperous. Scudder’s Terrence is perfectly pompous and classically British. Cassidy has just the right amount of bombast to keep him believable. Pangaro keeps Khalid likable but also urbane. Elle is at once comedic and pathetic in her scene when she attempts to sing. Rawls is just fine and prickly as the feminist who is also vegan with food allergies. Hammond is a diamond in the rough as the N. Y. C. firefighter. He doesn’t say much but still delivers one of the most powerful speeches in the play. Latin as Omar brings humanity to even the most despised enemy. I thought his entrance marked the high point of the play.

Hurlbut moves the plot along well by allowing his actors to pull out all the stops at times. He states he did this play to help him understand the present political situation as possibly an extension of the fear we all felt after the attacks on 9/11. I am not sure I totally agree that the play does that. There are some inconsistencies in the script that are never explained. However, the comedy along with the drama keeps our attention and opens our deep memories of that time. It is one of those times that everyone remembers where they were and what they were doing.

Don Slater as Set and Lighting Designer creates a simple but elegant set. The special effects that work with the Sound Design by Rich Frangiamore are eerie but not overdone.

Omnium Gatherum is a lively but serious drama. So, join the cast for dinner and feast your eyes on excellent theater.

Running Time: One hour and 45 minutes with no intermission. 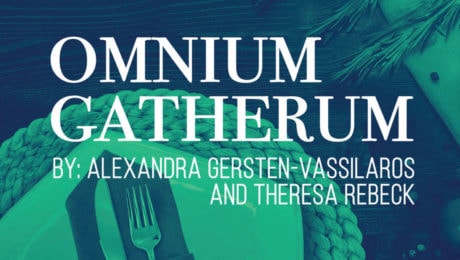