Amber Tamblyn and Andrea Gibson were heard loudly and clearly at The Kennedy Center this past weekend. Washington, D.C. and the Terrace Theater welcomed the two poets as part of the Comedy at The Kennedy Center initiative, which prioritizes “elevating comedy as an art form” and “uniting the local community through laughter,” and the 2017 Bentzen Ball Comedy Festival.

The Bentzen Ball, “curated” by writer/stand-up comedian Tig Notaro, originally premiered in Washington, D.C. in 2009 and returned again in 2013. 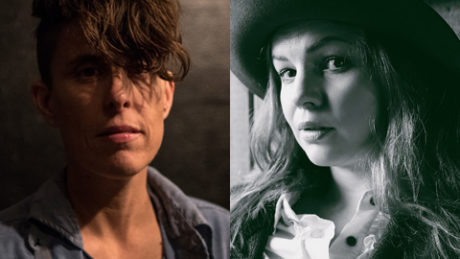 Tamblyn, whose screen credits include Sisterhood of the Traveling Pants, House M.D., 127 Hours and Django Unchained, among other artistic accomplishments, is also a prolific writer. She has three collections of poetry to her name to date.

While some lines in the selections she read were funny, to be sure, overall Tamblyn’s words were raw, genuine, at times angry, at times sardonic, but always – always deeply personal and frequently tied to an earnest objection to present-day politics (Tamblyn prefaced one of the poems by saying she wrote it while pregnant and campaigning for Hillary Clinton). It feels impossible to critique her reading due to its acutely personal nature (and the same goes for Gibson’s).

Tamblyn vigorously addressed women’s rights. She explained to the audience that she had just returned from speaking and participating at the Women’s Convention in Detroit. One of her poems, “Uncertainty,” inspired by the Day Without Women activism event, imagines a day in a world without women, where men hear “the echoes of their snores” and wander with no direction.

Another reflected in an autobiographic tone on her daughter’s caesarean section, when “her body’s eye opens then shuts.” Her last selection, “More,” emphasized a pervading “hatred” of women and crescendoed with intensity.

Andrea Gibson, who uses gender-neutral pronouns “they/them/their,” also has three collections of poetry to their name. In 2008, they won the inaugural Woman of the World Poetry Slam and their latest album of spoken word poetry, HEY GALAXY, speaks volumes.

Gibson, in again, an incredibly intimate and personal manner, mostly talked about harrowing themes and realities: the Pulse nightclub massacre in Orlando, injustice, friends who stick around during the tough times, racism, personal struggles, and the list went on. They and Tamblyn both received a standing ovation at the end of the evening.

This iteration of the Bentzen Ball hit less on the funny and more on the important, hard things, but Gibson still spoke of joy: “Joy is fuel… I think joy is a radical thing right now.” 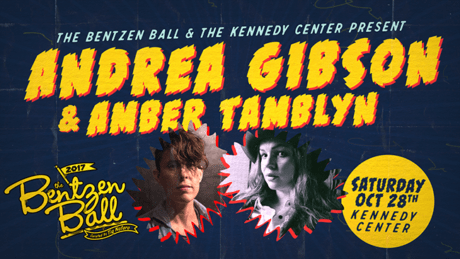