The wonder-filled stories that wend their way through In the Red and Brown Water were located by the playwright Tarell Alvin McCraney in “the distant present” in a fictional town in Louisiana. But in the mesmerizing and lyrical production at Howard University, the set evokes more an ancient Greek amphitheater—curving pink stone steps framed within a large arc, a wide vista of blue cloud cover beyond. It is a place such as where gods of yore would visit in human form, and the archaic echo is apt. For here it is McCraney’s enchanting cast of characters named after Yoruba deities who drop by—and what a fun playground of these gods the Ira Aldridge Theater becomes.

The action happens about as much in the aisles as on stage. Director Eric Ruffin, Composer and Musical Director Bert Cross II, and Choreographer Dwayne Murray conspire to make the entire auditorium part musical hall, part party space, part sacred site. In the first musical number, the ensemble made an amazing ritual entrance from on stage and the back of the house. Within minutes the opening night audience was so into the show it could have raved on all night. Oohs and ahs when characters and their relationships crossed lines or touched nerves, big guffaws when shade was thrown with rude slurs, swoons and bobbing to the dance beats and the singing and prerecorded soundtrack (which included the rousing “Down by the Riverside” with its trenchant refrain “Ain’t gonna study war no more”).

Tarell Alvin McCraney is the Academy Award–winning screenwriter for Moonlight whose play Wig Out! was a smash hit this summer at Studio. There’s something about his language and storytelling that becomes absolutely galvanizing in performance. His In the Red and Brown Water characters are a free-style gumbo of Yoruba traditions and Caribbean and African stories, and the Howard student cast made of them a banquet of indelible portrayals.

The play centers on Oya (an effervescent Chinna Palmer), who’s a star track runner. The Woman from State (Dani Ebbin) offers her a full scholarship, but Oya turns it down in order to care for her dying mother, Mama Moja (Ezinne Elele)—whereupon we wonder whether her selflessness means her future might have held more.

Oya is, as the opening chorus reiterates, “a beautiful girl,” and much of the subsequent storytelling turns on her relationships with three suitors—each a quirky and complex character in his own right. Ogun (an appealingly earnest Harrison Walker) is smitten with her but has a terrible stutter that she wants him to stop. Miraculously, his stutter later falls away when he’s with her. Shango (a magnetic John Chukwudelunzu) and Oya have a lusty bad romance before he goes off to war. She then takes comfort with her godbrother Elegba (a comic Tre’mon Kentrell Mills with an impressive singing voice), all the while pining for Shango, who returns in camo and knocks up Shun (Tatyana Flannigan), a local “girl from around the way.” 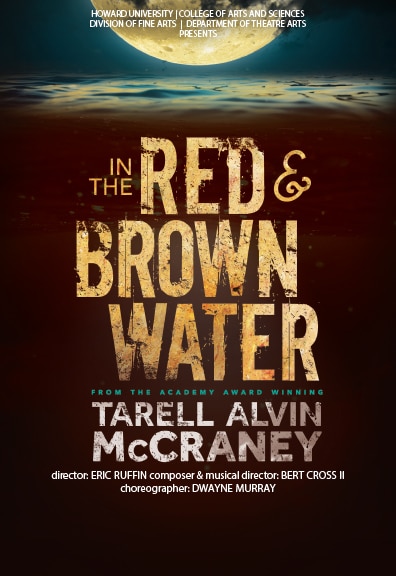 Oya’s athletic and academic career precluded, she is embarrassed and pointedly shamed for not having gotten pregnant—that being what’s supposed to be her lot in life. Meanwhile, two of her suitors father children and she learns she’s infertile. Unable to find fulfillment in motherhood, she becomes increasingly despairing, to the point that she commits a horrifying act of masochism: She cuts off her ear and hands it to Shango as a token of her love.

There is a decided darkness within McCraney’s narrative. Oya’s character arc, despite her ebullience and resilience, is ultimately quite grim. (The color red in the title is established early on as referring to Oya’s bleeding.) Yet in performance, it’s as if a comic pop-tribal opera were being played out, in a world full of joy and jubilation. It is precisely that tension between hearts that ache and bleed and hearts that leap and sing that makes this production such a heartfelt and entertaining evening.

In the Red and Brown Water plays through November 4, 2017, at Howard University’s Department of Theatre Arts at the Ira Aldridge Theater – 2455 6th Street NW, in Washington, DC. For tickets, purchase them online.