The Little Theatre of Alexandria’s most recent production, Vanya and Sonia and Masha and Spike by Christopher Durang, is an interesting look at family dynamics and the lingering effects that being a caretaker can have on a person’s life once they no longer have someone to care for. The show is full of literary references, absurd scenarios, and poignant reflections, and analyzes a person’s basic desire to find meaning in their life.

The story looks at three siblings in their fifties. Vanya (Mario Font) and Sonia (Lorraine Bouchard) have been living in their childhood home together. Years ago, when their elderly parents needed help, the two moved back in and took on the roles of caregivers. Once both parents passed, Vanya and Sonia remained in the home. Having completely invested their lives in tending to the needs of their mother and father, they no longer knew what to do with themselves. So, they idled away in the house that had become their sanctuary.

Howard Vincent Kurtz and Alex P. Wade co-designed a gorgeous set of the interior of the family’s house (Kurtz also directed this production). Wood floors and stairs. A swinging door into the kitchen. Set-dressing by Russell Wyland and Marian Holmes notably enhanced the set, giving it a very realistic and homey feel.

The third sibling, Masha (Carol Preston) is a famous actress who financially supports the family, yet is mostly absent from their lives. But when Masha shows up with a much younger man, Spike (John Paul Odle), old resentments and unsettled grievances are brought to the surface.

Vanya, Sonia, and Masha’s parents were professors and named them after characters from the works of famous author, Anton Chekhov. But the names are not the only thing borrowed from Chekhov. There are many details incorporated into the story. There is a cherry orchard, an obscure mini play within the play, and a young naïve aspiring actress. There are also more blatant references to the playwright in the script.

One doesn’t need to be familiar with the works of Chekhov to be able to appreciate the play, though. Durang’s characters are fully realized and solely exist in the realm of his story.

The play is a comedy at heart, laced with sentiment but, while the material is interesting, what was lacking in this production was energy. The actors at times did not seem to know their lines and there was an absence of a natural conversational flow.

The show’s pacing was slow, which was not helped by the scene changes. There were no blackouts, but the lights would fade and the actors would slowly, in character, make their way off stage. This sometimes included one the actors going up the stairs to the imaginary second floor of the home. While I understand the idea behind maintaining the illusion even when the lights are down, the transitions killed any momentum that the actors had built up.

The production was not without it’s good moments, though. Hannah-Lee Grothaus plays an endearing Nina, the neighbor’s niece who creates tension and jealousy between Masha and Spike when the young lover expresses interest in the more youthful woman. Font and Grothaus develop a bond that is genuine and sweet, and Nina affectionately refers to him as Uncle Vanya (note yet another Chekhov reference).

Appropriately named, Cassandra (Marilyn Pifer), is the house maid, who constantly gives predictions and warnings that sound nonsensical but continuously, in a roundabout way, come true. Pifer was a blessing to the production and truly funny. Any time she came on stage, she brought laughter with her.

Vanya and Sonia and Masha and Spike is a play about real people, with a blend of intellect and comedy that anyone can relate to. With a boost of energy that I’m sure the actors can provide, LTA has a solid show on their hands. 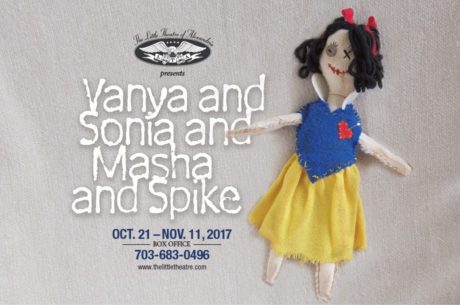