It’s best to start with the description of Don’t Come In from the catalog: 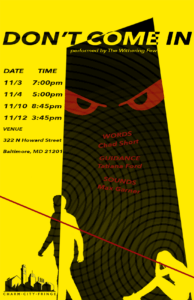 Love is scary. And it just might kill you. Stubborn lovers Em and Missy, unable to express their true feelings for one another, are haunted by the demon Intimacy. The more they try to ignore it, the stronger Intimacy becomes. Intimacy may even be strong enough to take human form. Will Intimacy get its way? What will become of Em and Missy? ‘A panic attack on stage!’

Intimacy is depicted as a shadowy figure in all black, wearing a giant pair of googly eyes.

This piece is primarily a pre-recorded confused poem with incongruous imagery. (Teeth are described as “stained like a peach.”) At one point a man chokes a woman, which the woman wanted, it seems, and I remain baffled by heterosexuality. Everything is described as golden yellow, and then the man throws a chair. There’s a very long voicemail message, and then Something Happens. Someone else wears the googly eyes at the play’s end and we are left unsure as to what it all might mean. A point is being made, but what could it be?

Both actors — Em and Missy — commit fully to what is being asked of them. (Em spends several minutes silently vibrating in a chair while eerie lights splash across his face; Missy, as mentioned, is choked.) There is no artistic hesitation — but there’s no coherence, either. Whatever meaning is in this esoteric piece is so personal as to remain impenetrable without a conversation with the playwright, Chad Short. 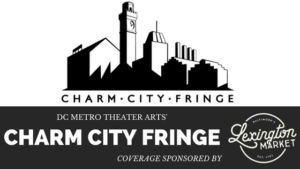