Shedding new light on Hamlet by William Shakespeare is what Aquila Theatre aims to do with its upcoming production at Fairfax’s Center for the Arts. Hamlet has been recognized for centuries as one of The Bard’s greatest and most popular works; and the New York City-based Aquila Theatre is known for its clever staging and clear acting of classic plays.

Shakespeare’s Hamlet has thrilled audiences with its calculating villains; innocent victims; and a dead father as a ghostly guide for his avenging angel of a son. It also gave the world lines such as “To thine own self, be true,” and “O shame, where is thy blush?”

For Desiree Sanchez, Executive Artistic Director of Aquila Theatre, the tragic Shakespearean play “is universal because it speaks to an inconvenient truth about human nature. Why are people always so easily led by those who are charismatic and never question their motives?”

She adds, “Hamlet illustrates how people will always follow the path of least resistance, even if that path leads to pain and destruction. Prince Hamlet is exposed to a terrible truth–the murder of his father by his uncle–and acts as if he is in a bad dream where the dreamer tries to run away from something horrific but finds his legs cannot move. He seems incapable of acting to right this wrong. What makes one so utterly useless and incapable of righting such obvious wrongs?”

Aquila’s production is robust and singular in its aim to be “viscerally and visually arresting, with a style of movement which is bold and unapologetic,” Sanchez continued. The production is built around actors who are “fully invested in their characters and the element of surprise and clarity.”

Aquila Theatre’s take on Hamlet also seeks to go beyond the onstage performance. “This play speaks to anyone who has found themselves in a position in which they feel inaction perhaps is best when faced with an impossibility,” said Sanchez. “This play today is as relevant and as necessary as ever in reminding us of our responsibility to not shy away from our problems and to not let anger and resentment build into a frenzy.” 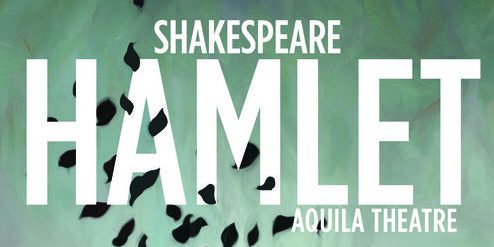 Aquila Theatre’s Hamlet will be performed one night only – November 11, 2017 at The Center for the Arts Concert Hall at George Mason University – 4400 University Drive, in Fairfax, VA. For tickets call (703) 993-8888 or purchase them online.