Creative Cauldron’s Learning Theatre has put on an original version of Francis Hodgson Burnett’s A Little Princess. Ellen Selby, who co-directed the show, wrote the book, with music by Matt Conner and Lyrics by Stephen Gregory Smith. The production is a delightful adaptation of the classic tale of a young girl, Sara Crewe, whose father dies, leaving her a penniless orphan. Although Sara’s pauper state brings on harsh treatment and mockery from those who once posed as friends, Sara’s kind and generous spirit shines through, showing that, with bravery and imagination, you can find happiness even in the lowest of circumstances. 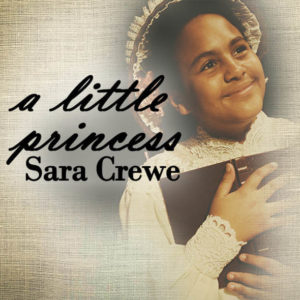 Being a Learning Theatre production, the show was full of young actors and actresses who attended an eight-week workshop. The group learns the original story and then, with the guidance of theater professionals, puts together their own interpretation of the story through acting the scenes out and improv.

Co-Director, Laura Conners Hull (Creative Cauldron’s Founder and Producing Director), explains that, as the kids explore the story, the creative team crafts the script and music around the ideas and details the group has created.
Anchoring the budding talents on stage are Will Mark Stevenson, as Captain Crewe and Carrisford, and Izzy Smelkinson as Miss Minchin.

As the story begins, Captain Crewe (Stevenson) is saying goodbye to his daughter Sara (Arianna Vargas), whom he dotes on. After a time in India, Crewe has decided that his daughter needs a formal education and enrolls her in Miss Minchin’s School for Girls.

Miss Minchin (Smelkinson) is the headmistress and lavishes affection and favors onto Sara, but from the beginning reeks of insincerity and selfishness. Smelkinson is perfectly unlikeable, making Minchin the villain you love to hate-think Miss Hannigan-esque. Minchin runs the school with her younger sister, Miss Amelia (Fiona Scheer), who is kind-hearted but lacks the spine to go against anything her sister commands.

At the school, Sara is friendly to all the girls, but there are three girls whom she becomes closest: Ermengarde (Alessandra Simmons-Robles), who believes herself to be stupid until Sara takes her under her wing, helping her learn and gain self-confidence; Becky (Lorien Jackson), the scullery maid whom Sara insists should be her friend, despite the difference in their social status; and Lottie (Sophie Schmittel), a young girl who tends to have fits of tears until Sara discovers that the girl is scared and lonely, and merely needs patience and affection, something Sara is realizing more and more that Miss Minchin lacks.

Vargas is a sweet and endearing Sara. She does a wonderful job at story-telling, something that Sara does a lot in the show. Sara has a vivid imagination and tells incredible stories from history, like Joan of Arc and Marie Antionette. While she explains the characters and the action, the storytellers’ chorus (a group of about ten kids) come onto the stage in a dream-like state and then act out what Sara describes. Lovely lighting design by Dwight Townsend-Gray, helps the transitions between real life and storytelling.

These fun and creative live-action story scenes offer a way to incorporate more children into the show and also gives other kids the opportunity to be featured, outside of the main roles of the play. Each member of the chorus plays multiple roles and I would be amiss to not mention them all, so here they are: Gabriella Simmons-Robles, Mai Gabra, Abby Fred, Ben Graham, Aashna Kapur, Samantha Russell, Tiberius Schmittel, Owen Thiebert, Leif Trejo Hernandez, and Jared Tulodo.

The entire cast does a wonderful job. Everyone is full of energy and it is clear that they take absolute pride in the production they have helped create. And, while there is much more to the story, I would like to leave the storytelling to this fabulous group and encourage you to go experience the full show for yourself.

Ellen Selby, Matt Connor, and Stephen Gregory Smith have sculpted a thoroughly enjoyable production that the entire family can enjoy. As winter approaches, Creative Cauldron’s A Little Princess Sara Crewe is the perfect sort of entertainment to warm the heart and lead us into the holiday spirit of hope, love, and kindness.

Running Time: 90 minutes, with no intermission