What a giddy, joyful afterimage of mouthwatering kinetic alchemy. Under the confident direction of chemistry-setter Mathew Gardiner, Signature Theatre has produced an irresistible Crazy for You. It is a musical built upon an enduring George and Ira Gershwin songbook of tantalizing standards, and an unstuffy connecting storyline by DC’s own Ken Ludwig.

What set my heart a-flutter and inspired this column: the production is brimming with twenty or so choreographed musical numbers enriching the performance created by Tony Award-nominee Denis Jones (Broadway’s Holiday Inn, Honeymoon in Vegas). These are tightly melded with the splendid work of a fourteen-member band under the direction of Signature’s Jon Kalbfleisch (nine Helen Hayes Awards).

Jones (with Robbie Roby as the production’s dance captain/associate choreographer) created movements that brought emphasis-like exclamation marks to the Gershwin tunes. The Crazy for You choreography travels through plenty of territory. There is rhythmic skilled tapping from dozens of percussive feet; dizzying in-step, synchronized large ensemble numbers with loose-limbed, eye-high kicks and shoulder gyrations accomplished by a bevy of firecracker dancers; and, of course, romantic duets of wistful, sensual connections. There is also one dance duet built upon a delightfully come-hither rougher nature. And it is all before a close-by audience without distance to soften anything that might go array in a live performance.  No do-over allowed.

The Gershwin tunes, with Jones’ matching choreography range, from full-tilt production numbers “I Got Rhythm” and “Slap That Bass” to sweet moments of love solos for “Someone to Watch Over Me,” “They Can’t Take That Away from Me,” and “But Not for Me,” and a wistful duet for ‘Embraceable You” to the utter exultation of “Bidin’ My Time” and “Nice Work If You Can Get It” to “Things Are Looking Up.” And there are plenty more. What is also refreshing; the musical numbers have both chorus and verse.

The musical numbers are intertwined into a storyline using Ken Ludwig’s impish scaffolding of a book. Ludwig concocts purposely groaning buffoonery, light comedy, eye-squinting double-takes, and mistaken identities. A quick synopsis of the show: Bobby Child (Danny Gardner), a musical-loving banker, is sent to foreclose on a small-town Nevada theater. He decides to revive its fortunes after “meeting cute” with Polly Baker (Ashley Spencer), the daughter of the hard-luck venue owner. Along the way, there are run-ins with Bobby’s mother (Sherri L. Edelen), his erstwhile fiancée (Natascia Diaz), a Ziegfeld-like impresario (Bobby Smith) and hotel/saloon keeper Cole Burden as Lank Hawkins as well as eight “Follies Girls” and a gaggle of eight “cow-pokes.”

For those who grew up watching classic musicals on black-and-white television or for those for whom the movie La La Land resonates to their very core, head on to Signature. Get your fill of what live dance can do as a form of vivid expression of emotions and moods.

Crazy for You thankfully never takes itself too seriously. Then again, on the night I attended, the full house audience leaned forward as a group as the final romantic dance scene unfolded. It was tasty eye-candy and ear-candy.

Yup, this column has turned into a fan-boy mash note for expressive, live, well-accomplished dance and choreography. The Gershwins®’ & Ken Ludwig’s Crazy for You is a joy.  It is a sweet treat to end with a walk in the crisp outside air under the shimmering lights of the Holiday lit trees of Shirlington. Maybe even try some of your own best dance moves.  Nothing else needed; except perhaps some roasted chestnut stands nearby to cap off the evening. 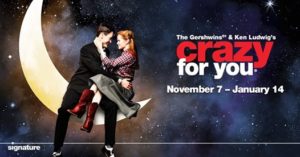