The gutsy woman-centric theater company Nu Sass is notable for producing works that feature women in major roles, onstage and off, typically in a tiny second-floor space on F Street that seats only 30 and feels a lot like a living room. In both substance and setting, Nu Sass creates up-close experiences that audiences cannot help but be drawn into, on themes that importantly intersect women’s lives.

Now, in a witty and gritty twist, Nu Sass has picked a play that speaks dead seriously to women’s lives but tells a story that’s about a man and played for laughs. It’s a farce called The Ugly One, an incisive satire that cuts comedically into our appearance-obsessed culture and the stigma of being unattractive.

The Ugly One is by a man, Marius von Mayenburg, a playwright renowned in Germany. And it’s about a man, an electronics inventor named Lette (Gary DeBreuil) who has a very ugly face. The running jokes about how ugly he is are brutal—his boss Scheffler (Aubri O’Connor), his wife Fanny (Moriah Whiteman), and his coworker Karlmann (David Johnson) do not hold back, and with each new phrase they use to say he’s ugly, the audience howls. (The same jokes told about a woman character would be cringe-worthy. There’s no way this role could be gender-switched.)

Arguably prejudicial appearance standards impact #MenToo. But it is women who bear the brunt—to an extent that’s not funny. Which is why the Nu Sass production of The Ugly One is so savvy, satisfying, and subversive. The story is a harsh yet farcical send-up of “looksism” and how it can denigrate one in the eyes of others and degrade one’s own sense of self. One’s looks are implicated in one’s very identity and individuality, and that’s a painful truth, readily recognizable by anyone who’s never felt good-looking. But seen through von Mayenburg’s absurdist lens, a double standard gets flipped to uplifting delight.

Lette decides to have plastic surgery at the hands of a very Germanic doctor (O’Connor again). After the bandages are removed, the operation is such a success he becomes an instant sex object, lusted after not only by Franny his wife but also by a wealthy older woman (Whiteman again), her gay son (Johnson again), and dozens of offstage women with whom he now has affairs. So desirable does Lette become that other men go under the knife just to look like him. Soon the face Lette sees in the mirror he now sees everywhere. Even the gay son gets the operation to look like the man he’s hot for, which leads to a comically metaphysical payoff at the end that is as gut-busting as it is mind-blowing.

The acting style is wonderfully broad, and DeBreuil in particular brings to the role of Lette an antic physicality and facial plasticity that keeps getting funnier. The scenes shift from one to another quick as a wink, and Director Renana Fox keeps the action moving at such a clip the show flies by. Set Designers M. Bear and Joe Largess deftly turn tight quarters into multiple locations—an office, a living room, an operating room—and Lighting Designer E-hui Woo with but a handful of instruments shifts scenes with clarity and ease. The Ugly One, translated from German into British English by Maja Zade, has been Americanized by Nu Sass so seamlessly the play seems written here now.

A perfect fit for Nu Sass’s female-driven mission, The Ugly One is a dark drama about women tricked out as a light, brisk allegorical farce about men—and face it that’s a formula for sure-fire fun. 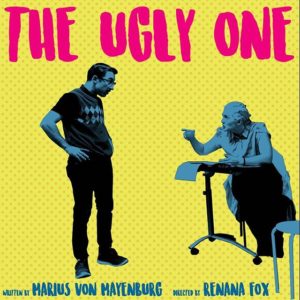 Running Time: About 80 minutes, with no intermission.

The Ugly One plays through December 17, 2017, at Nu Sass Productions performing at Caos on F Street – 923 F Street, NW, in Washington, DC. For tickets, purchase them online.