A tour de force performance by Thomas Keegan and masterful stage arts combine to make Solas Nua’s Misterman a jaw-droppingly good show. Directed and choreographed by Artistic Director Rex Daugherty, the monumental production takes over a sprawling dance space on 14th Street, makes of it the cluttered shambles of a warehouse where the character Thomas Magill lives, and sweeps us into the distressed soul of a man whose religious self-righteousness and missionary zeal mask deep-down shame.

As is so often the case.

Misterman is a scalding one-act one-man script by the great Irish writer Enda Walsh (best known for his adaption of the movie Once into a musical). Set in insular Inishfree, the play originally was a spare spoken-word piece that evoked the unseen characters in Thomas’s life in a monolog. It could easily be done in a small black box (as the then newly formed Solas Nua did in 2005 at DC Arts Center). Later Walsh rewrote the play to take place in “an abandoned depot/dilapidated factory” strewn with debris and dotted with small stages where Thomas now engages with the other characters through action—sometimes by impersonating them in imagined exchanges, sometimes by direct address, and sometimes (as in Beckett’s Krapp’s Last Tape) responding to voiceovers prerecorded on his collection of predigital devices.

At first it can be a little difficult to keep track of all the supporting characters who pop up in the story—though in Keegan’s dextrous performance there is never any doubt that they are vividly present to Thomas. They include his mother (to whom he is inordinately attached) and his deceased father (whom he desperately wants to please). There are also several neighbors in his village whose various moral failings—profanity, immodesty, indecency—Thomas records in a notebook. Consumed by religious fervor and seized by a perfervid imagination, he believes faith in the goodness of God can save them from themselves and redeem himself as well.

Keegan as Thomas seems to skitter about the stage, a hyper hermit, scrunched over, busying himself with this prop and that, nimbly depicting this character and that, a torrent of incongruous poetry coming out of his mouth. Here, for instance, is Thomas imagining himself in Heaven:

I sit like an angel of goodness up here…. I listen to God’s music soothing and piercing me with his goodness…. I have a look down on Inishfree…. And I see its pure white soul being stained by the bad…. I look how temptation is twisting its ugly way into my neighbors…like they were blind and playing at the gates of Hell they look. But the good angel will make it change. My bright light of goodness making the pure grow again. And God has placed his hand around my shoulder. And me and God smile and look down on all my good work.

The last offstage character Thomas beholds is an angel in whom he sees his own salvation. “In front of this angel,” he says, “everything is filth.” Here he imagines taking a walk with her:

Me and the Angel walk alone over a wilderness of dirt and lose ourselves in dreams of a better life. And there’s only us in this world… She talks God’s words to me…. How beautiful this new world is. How pure in hope, how free in dream…. And the past history of me and what I have lived through, the hurt, the beatings, the abuse, the lies…they evaporate in the air around me. And we will build anew her and me…and we will make new histories of hope and peace and love.

That’s not at all what happens. The story ends shockingly.

At first, Thomas’s character seems eccentric but harmless, a self-styled village scold but still a nice, polite young man who drops in now and then on other folks in town and lives alone with voices on tape and in his head. At most an enigmatic personality wrapped in a vertigo of language. But once Thomas’s character arc takes hold such that we learn the inner turmoil in his fanaticism, Misterman becomes epic, a wrenching portrait of a man deranged by shame that dare not speak its name.

A parable for our times.

Scenic Designer Jimmy Stubbs has created and set-dressed an environment that uncannily appears to be what Thomas himself would have accumulated; there’s no imposed design concept, there’s only expression of a character. Simultaneously Sound Designer Neil McFadden and Lighting Designer Marianne Meadows have unleashed such a blizzard of sound and light cues it’s as if we are witness to synapses firing in Thomas’s burning brain. Technically the show is a must-see execution.

And it would be hard to imagine a solo performance as complex, nuanced, and spellbinding as Thomas Keegan’s.

Running Time: About 65 minutes, with no intermission. 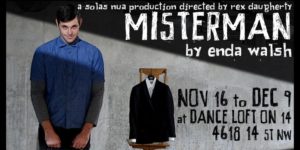