I went into Finding Neverland with high hopes. I had been enchanted by the 2004 film from which this musical has been adapted. The story, based on a play by Allan Knee, follows the (highly fictionalized) relationship between J. M. Barrie, the widowed Sylvia Llewelyn Davies, and Llewelyn Davies’ four sons, who inspire Barrie to create Peter Pan, the modern myth for which he is remembered.

Some of the members of the creative team added to these hopes. James Graham, the book writer, has emerged as an heir to David Hare, writing sophisticated plays on political themes such as This House and The Angry Brigade. When I watched So You Think You Can Dance, Mia Michaels’ choreography was usually a highlight of a show. Most of the audience at the opening of the touring production at the Academy of Music might disagree with me, but I found this musical adaptation soulless: when the first musical is created by algorithm, it will resemble Finding Neverland. Few moments are bad in themselves, but the whole enterprise feels like it was cold-blooded assembled to be “a hit musical,” or at least something resembling one.

According to his Wikipedia page, Gary Barlow was voted “the greatest British songwriter of all time” in a 2009 poll. I’ve never heard of any song he’s written, and I’ve already forgotten the melody of any of the generic corporate pop songs he co-wrote with his longtime collaborator Eliot Kennedy for Finding Neverland. Haphazard sound mixing did not improve things: I couldn’t make out the lyrics in most of the songs involving the entire company, and sometimes with individual secondary roles.

Graham’s book is little better. In my memory, the relationship between Barrie and Mrs. Llewelyn Davies in the movie remained ambiguous, as did his relationship with the boys. Here, it is a doomed romance of the sort found only in fiction, carefully scrubbed of any whiff of ambiguity or nuance, like every other relationship and plot point. For all the talk of imagination onstage, nothing is left for the audience’s imagination, and there often, especially in the humor, seems to be a confusion between the child-like and the infantile.

Among the creative team, Michaels’ choreography is Finding Neverland’s strongest suit. It’s constantly, almost obsessively, energetic, but provides most of the memorable moments of the evening. “We Own the Night” is a tour de force. “Welcome to London” is eccentrically charming, featuring more hops than a West Coast IPA. Too often, however, the dances look like they were designed for So You Think You Can Dance: there’s no revelation of character, no plot development, but a lot of cool-looking moves.

Director Diane Paulus directs with a subtlety matching the book and music. There are a few moments of magic, but not many. The design team does professional work – Jon Driscoll’s projections stand out particularly. But another recent Broadway play inspired by the Peter Pan story, Peter and the Starcatcher, contained more magic and imagination in any scene than can be found in the whole here. And the main difference between any element of this production and an above-average homegrown production from a Philadelphia company of almost any size is the amount of money that was obviously available to throw at any problem.

The actors mostly do what they can with the material (although one of them manages to be noticeably bad in multiple roles, even at the rear of a crowd scene). John Davidson, the one “name” in the cast, portrays the producer Charles Frohman and a fantasy Captain Hook. He remains spry for a septuagenarian and delivers a performance of well-aged ham.

However, Billy Harrigan Tighe, as J. M. Barrie, deserves special praise: he has a lovely voice, handling the extended range asked of the role, and is one of the better dancers in the company. More importantly, his Barrie felt grounded in some sort of reality: there’s always a sparkle of life when he’s onstage, even in a preposterous and gratuitous number like “Stronger” (which closes the first act), providing a sense that there might be something interesting beneath the surface of this showbiz machine. 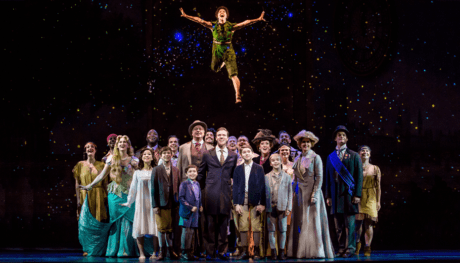 Finding Neverland plays through November 26, 2017 and is presented as part of the Broadway Philadelphia series by The Kimmel Center for the Performing Arts at the Academy of Music – 204 South Broad Street, in Philadelphia, PA. For tickets, call the box office at (215) 893-1999, or purchase them online.