Post-Play Palaver is an occasional series of conversations between DC Metro Theater Arts writers who saw the same performance, got really into talking about it, and decided to continue their exchange in writing. That’s what happened when Senior Writers and Columnists David Siegel (In the Moment) and John Stoltenberg (Magic Time!) saw the U.S. premiere of The State.

David: Forum Theatre, under the leadership of Michael Dove, is providing DC-area theatergoers the opportunity to take in, if not participate in, a production of Bulgarian playwright Alexander Manuiloff’s The State. The production is an experimental, interactive evening involved in the emotional story of the “last conscious night” of a young man fed up with his life’s situation and desiring to make a public statement. The State is experimental in that playwright Manuiloff has “scripted” the show with dozens of sealed envelopes tucked away in a box on a black table centerstage under one high-intensity bulb and a hanging microphone. It is like no other production I have seen recently here in DC. It is a ballsy undertaking that left me heated, involved, and annoyed.

John: Over the course of the evening—an audience-participatory stunt that ran about 50 minutes, followed by very voluble discussion that lasted longer—I went from boredom to annoyance to anger. I am and will continue to be a huge fan of Forum Theatre, but this event, in my estimation, is a wrongheaded misfire.

The story of The State—as a handout explains—centers on an act of self-immolation committed in Varna, Bulgaria, in 2013 by one by Plamen Goranov. He doused himself in gasoline and set himself fatally on fire “in a protest against corrupted and mafia-controlled local government.” Though Manuiloff has Goranov saying “I have to write a letter to let them know I do it for a reason,” Goranov never, in fact, did so. Nor does what drove Goronov to this act ever get referenced in the piece. The State is a “performance” only to the extent that audience members traipse up to the table to open a preset sealed envelope and read aloud a sentence or so that Manuiloff wrote). There’s no particular artistry to review, no actors, no director. Meanwhile, the focus of Manuiloff’s semi-scripted group exercise becomes not Goranov’s cause or principles but instead a parlor game with no rules. In the end, Goranov’s act of principled political protest has been reduced to being processed as the audience’s self-consciousness about how it felt to play along—essentially collective “all about me” navel-gazing. As someone who takes high-risk acts of political protest against systems of injustice very seriously, and who believes such acts are at times necessary, I was appalled at the trivializing personalization that The State aids and abets.

David: As I took in the evening, I witnessed about a dozen audience members of the 50 or so in the Woolly Mammoth Rehearsal Room stand up from their seat and move to the table to open one of the sealed envelopes. As they did so, some were nervous, some deliberate; some read with a clear voice, others read with a bit of a stammer. Some opened a sealed envelope with a flourish and others less so. That seemed real enough and unscripted. Well, at first. Over time, however, I began to wonder who might be a “plant” pushing us along, or may have done some pre-work with the playwright (seated in the rear and out of sight) or Forum folk; and who not. Over time, some began to take on their own self-aware theatricality with their reading. It began to take on an artificial nature; not organic. It became not authentic, but studied; not pure and even worse, to me.

The life of the individual who we were learning about through Manuiloff’s letters was replaced with something else, a game-like production for which a life didn’t matter. The experiment lost its value to me. Did others feel that way too? I thought to myself. Was I just too old to “get it”? Were my own life experiences getting in the way of the intent of the playwright? I pondered long and deep.

John: During the discussion, someone wondered aloud if there had been any acts of self-immolation in this country, and no one had an answer. There had been no dramaturg’s wraparound of research that typically contextualizes the relevance of a theatrical performance. There was only the handout about Goranov, whose act was in a faraway country barely relatable to a U.S. audience. Meanwhile, my mind leaped to two political acts of self-immolation that were vivid to me at the time they happened and to this day are profoundly germane. One was in 1965, during the period I was facing the draft, when Norman Morrison, a Baltimore Quaker then age 31, immolated himself to protest U.S. involvement in the Vietnam War. He doused himself with kerosene and set himself on fire at the Pentagon. And the other was in 1984 in Minneapolis, my hometown, when a young woman named Ruth Christenson, carrying “Stop Pornography Now” leaflets, poured gasoline on her head and set herself on fire in front of a downtown bookstore that carried sexually graphic material. She left a letter explaining that she could “no longer accept living” in a society where “men do not want to end the denigration and exploitation of women.” Either Norman Morrison’s story or Ruth Christenson’s would have made a theater event with more relevance and urgency than The State. Not having done its usual homework, Forum delivered more distraction than call to action.

David: The post-show discussion and issues regarding the young man at the center of playwright Manuiloff’s sui-generis creation remain vivid even the morning after. There seemed to be those (the majority, shall we call them Bolsheviks) who were definitely into the performance experiment that is The State. A few, like me (shall we call them the Mensheviks) were more interested in the actual young man depicted burning himself to death as a political and personal protest. The discussion was open and forthright. For that I am grateful.

Yes, I agree with you, John. Such horrific things have happened in America. But without Forum having a dramaturg to inform, it was left to other audience members to stand and speak. Morrison’s self-immolation is something I do vividly recall as one of those protesting against the now-distant Vietnam War. There were also Buddhist Monks who regularly burned themselves to death in Saigon as a public protest so that Americans would see on the evening news and want to end the Vietnam War. That seemed acknowledged by a few in attendance. Were the Monks physically in America? Well yes, in a way they were, for the burning flames of their bodies were shown on American network news, the social media of those days. I believe that self-destruction as protest was also used in the Arab Spring as a protest tool that was beamed into America through social media.

My takeaway from this post-show discussion: it seemed most of the folk speaking were more interested in theatrical performance form rather than the person for whom playwright Manuiloff “wrote” his script of sealed letters.

As I left, I was just shaken. The morning after, I still am. The young man’s story at the center of The State about what “the corrupting state” had done, was doing, and would continue to do was drowned out. His protest had no value. Nothing would change. His ashes would be hosed down and away and few would notice the burn marks on the street. For some it was experimental form as the substance. Was that the provocative playwright’s intent? Or for that matter Forum’s as the producer?

So with this said, needless to say, the evening was powerful. It locked onto my own experiences. It gave me new insights. When you see it, let us know what you think? Let’s carry on this conversation.

John: Yes, for sure. Forum aims to start conversations and has definitely done so with The State. Then let us continue to applaud DC’s extraordinary community of politically engaged theaters while we hold them accountable for how they engage their vital role at this troubling juncture in our nation’s history.

Running Time: About 50 minutes, with no intermission (varies, depending on pace of audience participation), followed by discussion of variable duration. 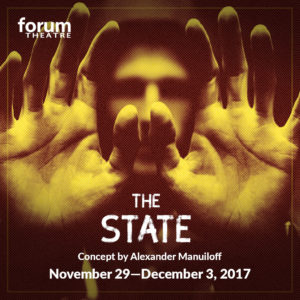 The State plays through December 3, 2017, at Forum Theatre performing in the downstairs rehearsal hall at Woolly Mammoth Theatre Company – 641 D Street NW, in Washington, DC. For tickets, call the box office at (202) 393-3939, or purchase them online