Andrew Watring, a Junior at American University, has penned Shakespeare is a White Supremacist – a new play that analyzes race in the context of classical theater. Watring’s original play is being produced, this weekend only, by the AU Rude Mechanicals. I was able to catch up with Watring to learn more about the playwright and the play.

Jack Purcell: Please introduce yourself to our readers. How long have you worked in theater? How long with Shakespeare, in particular?

Andrew Watring: My name is Seth Andrew Watring – I go by my middle name. Coming from a community theater family, I’ve been doing theater since I was six years old. My mother produced shows, my father built sets, and my sister and I performed. I only started “working” and being paid in theater this past summer when I directed Passing: A Stage Play for Capital Fringe. I’ve been working with Shakespeare since I was in high school. I had a phenomenal high school theater teacher in Alabama and she made sure I understood and could work with Shakespearean text. She had such a specific, physical way of tackling his words that appealed to me as a performer. That original interest in Shakespeare is what drew me to direct my previous Shakespearean work: a Jim Crow era, southern Coriolanus.

For those who are unfamiliar, can you tell us a little bit about the AU Rude Mechanicals and how you came to be involved with the company?

We are a student-run theater group, founded in 2003 by Thomas Ferlisi, Rebecca Krichinsky and Jessica DeStefano. Our mission is to provide a creative outlet for AU students with a passion for theater and a love for Shakespeare, to produce quality shows for the AU community, and to reinterpret classical works within a modern context. Before I came to this university, my best friend, Perry Scalfano – former Artistic Director of the troupe – was already working with the organization, and my path from there was easy. My freshmen year, I assistant directed the fall mainstage show, As You Like It, which propelled me to direct an adaptation of The Frogs by Aristophanes that spring. From there, I ran for and won a position on our Executive Board as the Outreach Director for my sophomore year. That spring, due to a vacancy, I was selected as the Artistic Director and directed Coriolanus. I have been the Artistic Director since.

Is Shakespeare is a White Supremacist the first full-length play you’ve written?

This is the first full-length play that I’ve written, but not the first dramatic text. This semester, I wrote five of the ten-minute plays for Something Wicked, a collection of scenes each directed by a different director. I have several drafts on my computer that I work on over time, but Shakespeare is a White Supremacist is the longest work that I’ve written that’s been produced.

From where do you draw your inspiration for the piece?

In the spring, I saw a one-woman show by AU alum Manna Middlebrooks. During the piece, she directly addressed the audience, and asked, “What are you doing for people of color on campus?” She turned to me to respond. I was directing Coriolanus at the time, a production inspired by and produced for people of color, but, in the moment, I said, “not enough.” That night, I messaged those closest to me and told them that I would be writing a piece of theater that draws from the experiences of performers of color. I didn’t know what it would look like or what it would, but I reached out to performers of color, started gathering stories, and the piece ballooned from there.

How heavily does your play rely on the works of Shakespeare, and what sorts of liberties do you take with the source material?

In the Spring, you presented a Jim Crow Coriolanus. Why do you choose the work of Shakespeare as the means through which to discuss the issues of race and discrimination that are prominent in your play?

I think classical texts are ripe with opportunities to discuss issues like race and discrimination. The language is so powerful, so adaptable and so directable. The choice to use Shakespeare specifically came from my own personal interest in Shakespeare – and the Rude Mechanicals is the outlet I use for artistic expression. With using Coriolanus specifically, the parallel was simple: the story focuses on the tension between oppressors and the oppressed. I barely edited the text – all the racial tensions were already there, in my mind.

What are some challenges you faced in writing a play that addresses these topics? How did you overcome them?

I think the biggest challenge I faced when writing this play was ensuring that I was not using this play to look at these issues through a single lens. I’ve had my own relationship with Shakespeare that is completely different from other playwrights, directors, and performers of color. I didn’t want to slap my opinions onto a play and then force audiences to interact with what I believe to be true. To overcome that, I relied on synthesizing the experiences of my diverse cast into the text. This play comes from me, but it also comes from my actors, my production team, and other people of color around this university. Through that, I believe this play speaks to many different people on many different substantive, meaningful levels.

What would you like audiences take away from the play?

You’ve still got another year to go at AU. What does the future hold for you, the Rudes, and Shakespeare is a White Supremacist?

For Shakespeare is a White Supremacist, I am planning to submit the text to Capital Fringe to be produced again in the summer with a revised script. If that doesn’t go through, I will try to produce the work myself through a theater company I am starting with my peers. For the Rudes, we are going to continue to grow. Our membership has more than doubled in the past two years, and we are hoping to continue that trend. We want to produce more works, higher quality works, and to continue to give an artistic voice to marginalized people. For myself, I hope to continue serving as the Artistic Director of the Rude Mechanicals until I graduate. I will continue to write, design, and direct my own work. Shakespeare is a White Supremacist has helped to develop and refine my style as a theater-creator, and I want to use this artistic momentum I feel to complete a myriad of projects that I have planned, like an adaptation of A Midsummer Night’s Dream and a project that focuses on my relationship with my father.

You’ve added a free, Saturday matinee of Shakespeare is a White Supremacist on Saturday, December 9 at 3pm. Why?

“It’s neither radical nor revolutionary if it isn’t accessible to the poor.” 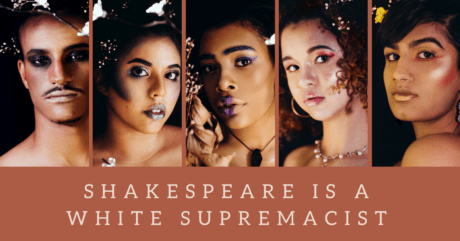 Shakespeare is a White Supremacist opens TONIGHT, Thursday, December 7, 2017 and plays through December 9, 2017 at the Mary Graydon Center at American University – 4400 Massachusetts Ave, NW, in Washington, DC. For tickets, purchase them at the door.