The annual productions throughout this region of Charles Dickens’s nearly 175-year-old tale, A Christmas Carol, are as timeless and an integral part of the holiday experience as nativity scenes, nutcrackers, and Santa Claus. Each year at this time, there are at least ten different productions within an hour’s drive in any direction.

This one is outstanding.

Chesapeake Shakespeare Company’s stellar version, adapted and directed by Ian Gallanar, pays homage to the Victorian-era original while subtly updating it for today’s audiences – and moving the location 3,628 miles from London to Baltimore.

The doors open to this show at least 45 minutes early for a good reason. As they order a drink from one of the bars on the first two floors, early birds will hear one of eight regional choirs performing Christmas carols for thirty minutes prior to the start of the show. Opening night, Heart of Maryland Barbershop Chorus warmed the house with their beautiful caroling and set the mood for what was to follow.

This first night (though the cast had already performed four matinees for school groups), minutes before the show began, it was Ian (pronounced I-on, not Ee-ann) Gallanar’s turn to describe his best Christmas ever to the audience. It was a short, sweet, and emotional narrative. At each show, someone from the production will tell their Christmas story.

Though A Christmas Carol is not a musical, in the traditional sense, six classic carols are movingly performed during the show and seven more by the cast during the pre-show and intermission. Plus, there are some fun boozy dance numbers.

Setting the tale in Baltimore is not a big stretch, nor is the clever, three-level set used in previous productions of this show, which depicts a row of brick Baltimore townhouses. Dickens visited Baltimore in 1842 and actually stayed at a hotel on Calvert Street.

In this production, a sign on the set during scenes set in the counting house firm of Scrooge & Marley notes the company is based at 202 E. German Street. Set in the heart of what was once Charm City’s financial district, that was the original address of the 1866 landmark Mercantile Trust building with its stunning gilded rosette ceiling, which now houses the Chesapeake Shakespeare Company at the corner of Calvert and Redwood streets. German Street was renamed Calvert decades ago.

Dialog throughout the show has been sharpened to poke fun or prick the conscience about current events. One character denounces the “new” Baltimore Sun, founded in 1837. She says Scrooge dislikes the newcomer newspaper’s political cartoons. He called their content “fake news.” References to local institutions like the Maryland Club, originally an exclusive pro-Confederacy men’s club founded in 1857; and the Patapsco Female Institute in Ellicott City, a girl’s finishing school opened in 1837 and now the site of CSC’s summer performances; and old Baltimore neighborhoods and nearby environs are peppered throughout the show.

In one scene, a character asks, “Is this heaven?”

“No, this is Cecil County,” another says — as the audience roars with laughter.

The sharp class-conscious comments of the Victorian era about working class men and women (“They smell like fish,” Scrooge sneers in one scene) evoke comparisons to some of today’s politicians.

Scrooge’s blustery, dismissive comments when two men enter his office seeking charitable contributions to aid the poor during the holiday season are remarkably contemporary. And painful.

For this show, Gallanar assembled a terrific artistic and production staff. Among them are: Daniel O’Brien who is the technical director, scenic designer and lighting designer; Kristina Lambdin for the detailed and well-crafted period clothing of the cast; hair, wig and makeup designer Haley Raines Young; Grace Srinivasan as music director; dance choreographer Nellie K. Glover and dance captain Kate Forton; and director of young performers Molly Moores. Speaking of which, there are a total of 13 children in the cast who work alternate dates. Opening night Tiny Tim was portrayed by a charming 8-year-old, Vivian Klepper. Max Sullivan, who had several children’s roles, has appeared in CSC’s A Christmas Carol in 2014, 2015, and 2016. He’s grown at least a foot since his first curtain call.

Similarly, Gregory Burgess has been cast as Ebenezer Scrooge in CSC’s A Christmas Carol each year since 2014. It is a strong role that could become a caricature if overdone, but Burgess trumps the stereotype, movingly portraying a damaged, stingy, heartless man who slowly – with the help of some ghosts and relatives who won’t give up – learns about humility, compassion, and the Spirit of Christmas. His transition isn’t quiet and contemplative; he shrieks and squeals through the entire play, but his redemption feels very real. Burgess and all the cast involve the audience in their performances. They make direct eye contact, talk to specific audience members on all three levels, and often enter and storm offstage through the audience.

Scott Alan Small as Bob Cratchit puts in a strong performance as the beleaguered and impoverished clerk whose paltry paycheck stretches to support his large family. His character’s unvanquished spirit lights up the stage. Elliott Kashner, as Fred, Scrooge’s nephew, has another strong role – and his roll on the floor during a drunken “Yes-No” game engulfed the audience in laughter.

One character who is not human but is very much a part of this production is The Fog. It seeps through doors and springs out of a trunk. It is changes from a mild, milky cream-colored cloud to a sultry Bromo-bluish hue or a volatile, volcanic red storm. Whatever it is … it accomplishes its mission and fades away without setting off any coughing fits among the audience.

Another terrific special effect is the “Marley door knocker.” A door has a ring knocker. Suddenly, Marley’s head appears in the ring. Then, both Marley and the ring knocker disappear. Likewise, several props, including Scrooge’s wheeled bed, silently appear and vanish from the three-sided thrust stage.

Chesapeake Shakespeare Company’s A Christmas Carol will ignite the warmth, joy, and spirit of the season in all who see it. 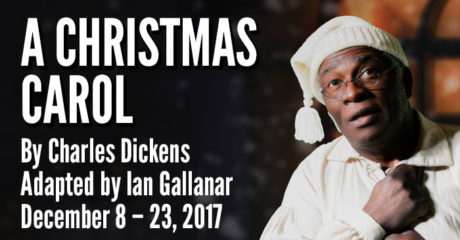 Running Time: Two hours and 15 minutes, with one 20-minute intermission.

Special events include a December 10 cookie party; a lecture by Menalcus Lankford, president of the Baltimore Dickens Society at 12:30 p.m. at the theater on December 12; Bob Cratchit’s Wassail Tasting before the December 14 show; plus performances by several area choirs on scheduled dates.

A Christmas Carol plays through December 23, 2017, at Chesapeake Shakespeare Company, 7 South Calvert Street, Baltimore. For tickets, call the box office at 410-244-8570, or purchase them online.