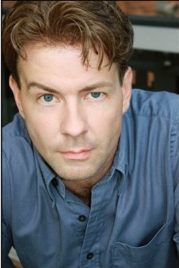 David, the character Cameron Folmar plays in The Santaland Diaries (now at Drafthouse Comedy Theater in DC through December 23), struggles with compartmentalizing his identity as a Macy’s Elf with being a 43-year-old human in the humiliating position of having to portray a Macy’s Elf. It’s a battle Folmar humanizes beautifully – especially for those of us who value our bitter humilities as much as our triumphant humanity.

I wanted to pick Folmar’s brain about the holidays, the tension between innocence and knowledge, what happened to later David Sedaris, and anything else he was willing to share with me. Folmar patiently answered my questions, encouraging me in ways that are probably not super useful and will no doubt list as one of his Big Regrets of 2017. Our conversation follows.

(Did he also steal my Secret Quiet Car Husband on the Amtrak from D.C. to NYC? PROBABLY. I’ll quote, on the record, from our email exchange:

Cameron: I’ll get these back to you tomorrow.  Taking the train back to NYC, so It will be the perfect time to work on it.

Mike: If you see a handsome English man in the quiet car hands off he’s mine our love is tragic because it’s based in silence.

Cameron: Isn’t there one on every train? You can’t have them all, Mike.

Mike: We are now bitter rivals and handsome enemies.)

Mike Bevel: What is your personal One Life to Live – the thing of which, like David Sedaris and the character David whom you portray, you’re an unappreciated expert, cataloging midrashic minutia as if it matters? (Mine? An encyclopaedic and unnecessary understanding of the Rosenbergs — Ethel and Julius, executed for spying. No one wants to know about them. Literally no one has ever said to me, over dinner say, “Mike, listen: tell me everything and leave nothing out.” I also will talk too long and too lovingly about the novel Wolf Hall, of which I own the normal number of copies, i.e., 20+.)

Cameron Folmar: OK, I think we may be kindred spirits because I could talk to you all day about Julius and Ethel Rosenberg. The Jell-O carton; Ethel’s brother, David Greenglass; his pregnant wife who backed into a space heater wearing some kind of gauzy peignoir and caught on fire! I have stared at Sing Sing through the window of a train. OMG, we need to talk. My fixation spreads to Robert J. Oppenheimer and the atomic bomb.  I grew up in the South near an Air Force base in the ’80s: nuclear annihilation and AIDS. Ah, childhood. 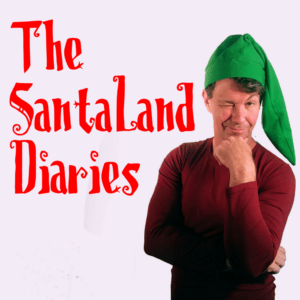 How old were you — and how did it happen — when you learned that there wasn’t a Santa Claus? (If you say, “I was in my 40s and reading some interview questions,” I will, of course, be devastated but will also, of equal course, feel as if I’ve brought you to Truth, which is a great responsibility, but one for which I feel I’m probably pretty great at, I mean look at me.)

I don’t remember exactly how I learned the truth, but I do remember the year before I learned: I had heard some rumors rumbling around the school, that maybe this Santa gig was a long-con by parents. I decided that I’d get to the bottom of it by asking for a gnome. Not, you know, like a gnome figurine or a gnome for the garden or even a coloring book of gnomes. I wanted Santa to bring me an actual, living gnome. My mom, who wasn’t always terrific, was sort of terrific here, because she explained it to me this way: That gnome you’re asking for, he probably has a family, who love him very much, and you can’t take him from his family, that would be selfish on Christmas. But what about a creepy ventriloquist dummy of Emmett Kelly?

When I was six years old, I approached my mother–she was sitting in an orange and brown plaid easy chair (a requisite piece of furniture in a middle class ’70s household).  I asked, “Is Santa real?” She said, “No–but don’t tell your brother.”  She’s blunt; and I appreciate that about her as an adult, but I was six years old. I guess that’s one reason (of many), that I identify with Santaland Diaries.

But did you? Did you keep the secret? Why couldn’t your brother be told? (And back to #1 above, did you read The Brother, the book about David Greenglass? That guy is the fucking worst but then every 10 pages I’d find myself in a moment of deep identification like when he didn’t want to really be a communist because he didn’t want to get up that early to deliver the communist newspapers. Related: he didn’t watch the atom bomb testing because, quote, he knew what it would look like already. Having nemeses requires us to be ever vigilant about ourselves.)

What is the worst Christmas gift a straight boy on whom you’ve had a desperate crush has ever given you? Mine was an iron.

The first Christmas my now-husband and I spent together I bought him a bunch of clothes and every one of them was so wrong he almost left me. “You…see me in these?” I will never forget the hurt in his voice. But also: your mom and I should probably not go shopping together because as a team we’d be unstoppable and also I am colorblind.

You and my mother can go shopping together and purchase sweaters for obese people to your heart’s content.

What went into creating the character of David for The Santaland Diaries? Did you make a choice not to base it on David Sedaris? Who were your influences in fleshing out David?

I adore David Sedaris. I have collected his books over the past two decades.  It is so presumptuous of me to say, but I feel an immediate connection when I read his essays, especially the earlier ones, they really had a bite! Santaland Diaries is definitely in that category.

Oh man, early Sedaris is really tough to beat. And then…I don’t know. I mean, it’s probably the same thing that happens to most observational essayists: people start noticing you, because you’re famous, so you can’t observe in the same way. I read a disappointing piece by him in the New Yorker several years ago about how he got a FitBit and likes to walk and I thought, “Okay. That’ll do.”

I did not in any way try to be David Sedaris. I honestly wouldn’t know where to begin. A lady did come up to me before the show the other day, asking, “Are you David Sedaris?” Sadly, I had to disabuse her of that fantasy.

When you listen to David Sedaris read The Santaland Diaries, it’s wonderful, but he’s not an actor; he’s reading from his journal.  I, on the other hand, am trying to tell a story that I can share with people up close–we’re talking knee to knee.  Overall, I would like it to be disarmingly off hand, then it spikes every now and then. And that should make for a good ride.

As for my influences:  Well, Cher is in the play. Carol Channing shows up. And, of course, Judy, Billie, Madonna–please! All of the children show up!

Sedaris was in his mid-30s when he read the piece on Morning Edition. Your version of the piece has David in his early 40s. What changes when you age the character up? Or, I guess, I’ll just say, as a viewer: there’s a deeper sadness when it’s a man in his 40s as an elf for a department store than there is for a man in his late 20s or early 30s. There’s a “Mistakes Can Be Corrected” sense when the character is younger; there’s a “Mistakes Can Define Us” quality when the character is aged up.

I am so glad you brought this up, Mike. The one thing I told Lynn [Sharp Spears, director of The Santaland Diaries] when we were talking about this project is that I had to change the character’s age from 33 to 43. And I was happy about it for the very reasons that you laid out. It is sadder, although, as artists, we learn to expect ups and downs. Santaland Elf is not a death sentence; it is a six- to eight-week gig. A survival job. Most of us do that at corporate law firms and the like. Or walking dogs (which is a perfectly good way to earn cash in my opinion).

What is your own personal favorite holiday tradition? Mine is never watching It’s a Wonderful Life. I am forty and five years old in this year of wonder 20 + 17 and I have not watched It’s a Wonderful Life every year since birth. Also, I love drinking eggnog until I am sick to my stomach.

I love to bake.  My strange/awful/wonderful mother taught me to deep fry salmon croquettes when I was 7 years old. Yikes! That oil was hot! As a consequence, I have utter confidence in the kitchen. I have the urge to whip up Holiday treats regardless of whether there’s anyone to appreciate/consume them.

I can’t believe you’ve never seen It’s A Wonderful Life…I’ll have to have you over.  It’s about a serial killer who thinks he’s an angel.  Every time he hears a bell ring, he has to kill a child. It’s a bloodbath!

Seriously? Has no one ever given you a hint regarding the plot of It’s A Wonderful Life? I’ll just say this: the title is ironic. Now, go watch! Bloodbath.

And finally: What — and where — can people see you in next?

My final performance of Santaland is Saturday, December 23. I will be back in February at Arena Stage in The Great Society. Come see! 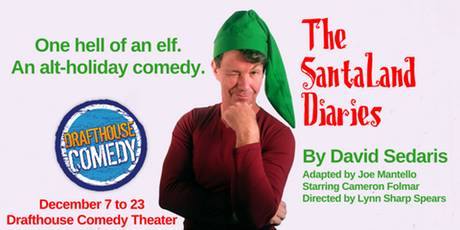