Continuing its signature holiday tradition this year with the company’s 14th annual panto – a family-friendly seasonal brand of musical-comedy entertainment, with origins dating back to the 18th-century British Music Hall – People’s Light presents a new version of its 2012 hit Aladdin: A Musical Panto. Co-written by the returning team of Director Pete Pryor and Choreographer Samantha Reading (who also serves as Assistant Director), with original music and lyrics Michael Ogborn, the freshly-revised production has been updated with topical humor centered on the obsession of present-day teens with multi-player video games, online hosting sites, and gaming venues. It makes for a hilarious addition to the historically-inspired show, and one that is highly relatable for both kids (who will be familiar with all of the names and technical terminology) and grown-ups (who will be howling at their own relative cluelessness!).

One of the medieval “Arabian Nights” folk tales recounted by the narrator Scheherazade in The Book of One Thousand and One Nights, the story of Aladdin, with its magic lamps, wish-fulfilling genies, and flying carpets, has remained one of the most popular themes in the genre since it was first staged as a panto in 1788, at London’s Theatre Royal in Covent Garden. Among the perennial favorites in the show, debuting as Aladdin’s mother in 1861, is the Widow Twankey – the stock character of the “Dame,” which is always performed by a male actor in drag. Pryor and Reading adhere to the British format, combining familiar plot-points and personages from the classic narrative with established ingredients and figures from the comic panto, including wacky segments of song and dance, bawdy innuendos for the adults, candy thrown to everyone, and audience participation encouraged throughout, along with intentional anachronisms and contemporary local references that will keep you engaged and amused by their cleverness.

Set in the fictional land of “Paolistein,” the cross-cultural, cross-temporal, and cross-gender mash-up by People’s Light is delivered by a rollicking and diverse cast of regulars and newcomers. The entire ensemble fully embraces the silliness, and parodies a laughable array of old-fashioned stereotypes, ridiculously outdated attitudes, and Pop-culture infusions, all of which are imminently right for lampooning. Starring in the titular role is the thoroughly charming Camilo Estrada as the teenage hero, expert at gaming, pure of heart, and stricken with love-at-first-sight for the beautiful Princess Mai Tai (portrayed with sincerity by the golden-throated Samantha Funk), betrothed by her father the Sultan (played once again by Kim Carson, sporting a grey beard, a huge pot belly, a gravelly male voice, an outrageously misogynistic perspective, and “really pretty legs”) to the diabolical Fu (the excellent Christopher Patrick Mullen, who elicits our booing with his sinister “bwah-ha-has,” repeatedly walks into doors, and, in a British accent, doesn’t hesitate to remind us that his name is spelled “f-u!”).

Mark Lazar reprises his scene-stealing role as the Dame, who, as Scheherazade, introduces the story in a sequined harem outfit, and, as the buxom Widow Twankey, bats his overly-long false eyelashes and flirts immodestly with his male castmates and random members of the audience. Humorous performances are also offered by Tom Teti as the logical Genius of the Ring, for whom Twankey shows a special affection; Susan McKey as Mai Tai’s Nurse, who offers advice on her unhappy experiences in life and love; the outstanding Zach Aguilar and Peter Danelski (both in their People’s Light premieres) as Aladdin’s anthropomorphic cohorts Morris the Mantis and Manny the Monkey (enthusiastically misidentified by one little girl in the audience as “the monkey and the alien!” – presumably because of the mantis’s green skin and antennae), who assist with his video-gaming, fight against the villain and his minions, and perform the panto’s conventional “messy bit,” making a mess out of making “sketties” on a malfunctioning pasta machine and throwing inflated “meatballs” into the audience.

Rounding out the cast are panto first-timer Nichalas L. Parker as the all-important Genie of the Lamp, whose likable characterization, powerhouse vocals, and smooth dance moves should surely guarantee his return in future productions (his Vaudevillian-style soft-shoe duet with Teti’s Genius of the Ring is a highlight); and Marissa Barnathan, Mike Dorsey, and swing Tori Lewis (who appeared in the performance I attended) as Fu’s unpaid interns, flinging out their arms, making exuberant gestures with their hands, and contribuing well to the youthful energy and over-the-top fun of the proceedings.

If you’re in the mood for an all-ages holiday treat, where laughs are plentiful, good ultimately triumphs over evil, and the lovers, young and old, live happily ever after, head out to People’s Light for its delightful production of Aladdin: A Musical Panto. 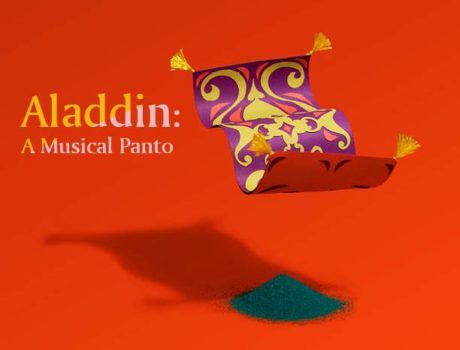