Don’t let the name fool you. They’re not just “the boys of summer,” they’re here year-round to keep the spirit of Swing, the sounds of the Big Band era, and the camaraderie of the “Rat Pack” alive, rounding out 2017 with a sensational selection of Christmas songs and jaunty repartee in their latest offering at Manayunk’s Venice Island Performing Arts Center, The Summer Club: A Winter Holiday. Featuring ‘Summer Clubbers’ Jeff Coon (Founder and Executive Director), Fran Prisco (Creative Director), JP Dunphy, and Michael O’Brien, a live seventeen-piece orchestra conducted by Music Director par excellence Larry Lees, and returning Guest Artist Jenna Pastuszek, the show provided the perfect choice for a sophisticated night of vintage seasonal entertainment by this extraordinary group of world-class performers.

Dressed in elegant formal attire, the pitch-perfect crooners and band spread holiday cheer as they joked with the audience and each other, moved to the rhythms of the music, and filled the hall with the mega sounds of the era (they don’t call them “big bands” for nothing!). Lees and the musicians (Dean Schneider on piano; Harry Himles on percussion; John Mulhern on guitar; Mike DiFebbo on bass; Paul Butler, Chris Kobik, Walter Palmer, Gene Tecce, and Cindy Yenolevich on reeds; Ted Blohm, Cathy Bridge, Barry McCommon, and Jim Tangney on trombones; and Tony Cinkutis, John Drechen, Jack Melton, and Dominic Scalfaro on trumpets) opened the show with a soaring instrumental medley of “Here Comes Santa Claus,” “Santa Claus Is Coming to Town,” “Have Yourself a Merry Little Christmas,” and “Auld Lang Syne” – an apropos reference to the “times long past” of the classics, and for Lees’ faithful period-style orchestrations.

The singers then came out one by one, each with a knock-out solo that cast a spotlight on their individual talents: Prisco’s smooth and self-confident rendition of “The Christmas Waltz” (recorded by Frank Sinatra in 1954); O’Brien’s touching version of the bittersweet “I’ll Be Home for Christmas” (from Bing Crosby’s iconic Merry Christmas album); Dunphy’s light-hearted up-tempo performance of “It’s The Most Wonderful Time of the Year” (which inspired besties Prisco and Coon to do some playful skipping around the stage); and Coon’s rich delivery of “The Christmas Song” (written in 1945 by Bob Wells and Mel Tormé, and popularized by Nat King Cole with his prized recordings of 1946 and 1961). Following another smashing orchestral interlude with “Winter Wonderland,” Pastuszek amazed the audience with her superb control, strength, and range on “Have Yourself A Merry Little Christmas.” In the words of Prisco (praising the Conductor and the band), they all supplied “the nutmeg for your eggnog” with their piquant vocals and banter.

Between the segments of holiday standards, the singers performed some of The Summer Club’s familiar favorites, including the men’s devil-may-care “Luck Be A Lady,” Dunphy’s staggering “Ain’t That A Kick In The Head” (inspired by the boozy manner of Dean Martin, but drinking a glass of water instead of liquor, in solidarity with his pregnant wife), Coon’s absolutely transcendent “That’s Life” (backed in perfect harmony by his fellow Clubbers), Patuszek’s haunting “The Man That Got Away,” Prisco’s fully-committed “Live Till I Die,” and O’Brien’s incomparable “Feelin’ Good,” which took my breath away.

And so went the evening, with one blockbuster hit after another, one flawless vocal after another, and one cool jazz-infused instrumental after another. From the men’s upbeat “Sleigh Ride” (which brought up the issue of global warming and Coon’s observation that “there’s no snow!”) to the terrific duet by the super-suave Dunphy and the powerful Pastuszek on “White Christmas” (with the other three providing lively back-up) to the entire company’s authentic ‘40s-style harmonies on “Let it Snow,” there wasn’t a single moment that wasn’t a highlight.

If you couldn’t make it to A Winter Holiday, The Summer Club returns for more “Mondays in Manayunk” at Venice Island in April, June, October, and December, and will also take the stage in Center City with another retro-themed nightclub-style celebration, A Big Band Valentine’s Day, on February 14, 2018, at Philadelphia Theatre Company. So if you can’t get enough of superb vocals, powerhouse instrumentals, and spot-on mid-century stylings, get ready to fall in love again with The Summer Club at dates throughout the New Year. This is one act that I cannot recommend highly enough, or for which I cannot use enough superlatives. 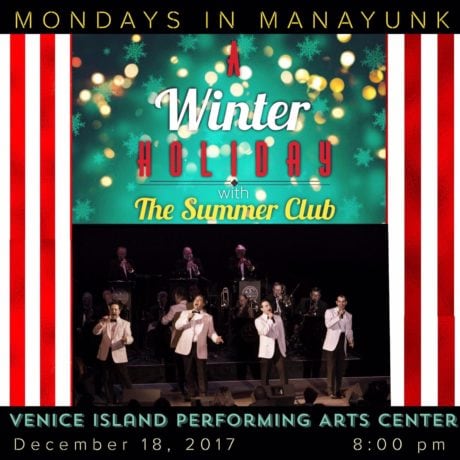