There wasn’t a dry eye when Margaret “Maggie” Kudirka ripped off her headscarf and fell to the floor during her poignant Loss and Survival solo, set to the familiar Edith Piaf song of no regrets. Just about everyone standing on stage and in the audience on a cold January day at Howard Community College’s Smith Theater cheered for Maggie, known in the dance world as “Bald Ballerina,” a moniker she gave herself after treatments for stage 4 metastatic breast cancer.

On Sunday, January 14, the tall, lithe dancer will return to that same Columbia stage for her fourth annual No One Can Survive Alone fundraising concert with proceeds to ease medical expenses. Students and professionals, friends and family, will gather for the afternoon concert that features both local and national dancers, including her “dance sister” Adrienne Canterna, the international ballet star, and the other award-winning family members, Ashley Canterna Hardy and Alicia Canterna.

Another highlight will surely be the appearance of Maggie with the fabulous Bad Boys of Ballet. Here is a company that attracts an audience looking to chase away the winter blahs. Maybe it’s the pop-concert ambiance of a Bad Boys performance, or the fact that this company has local ties, or the gut-wrenching fervor and physicality of the dancing; but whatever the reason, fans are as loud as they are loyal. Expect a hoot!

The list of her invited performers – nobody refused – is long and stellar. Among the featured dancers are The Boston Ballet’s Derek Dunn; Jourdan Epstein, a finalist from “So You Think You Can Dance,” season 11; Jon Ole Olstad, formerly of Netherlands Dans Theater; and headliner Sara Michelle Murawski, principal dancer with Semperoper Ballet. A half dozen dance studios will be represented, and a special Tribute to Kiersten by the Dance Explosion is on the bill. Andrew Holtz, emcee for Starbound National Talent Competition, returns as master of ceremonies.

Still Maggie’s star shines the brightest. Her arabesque is superb and makes you forget that achieving that line may be more difficult for her than for others. And when she tosses her pink bandanna (which previously covered her bald head), falls into a split, then raises her arms à la Alvin Ailey’s “Revelations,” folks jump up and cheer for their sweetheart ballerina/producer.

Soon after her own diagnosis in 2014, a breast cancer survivor suggested that Maggie produce a dance concert to take her mind off of her struggles. “She was right,” recalls the 25-year-old artist in a recent Dragon Radio broadcast/podcast on the HCC campus. “Planning took my mind off cancer, and donations helped with medical bills.” Since that fortuitous encounter, the Bald Ballerina has appeared in infomercials, benefits, and workshops to educate dancers about cancer.

Early on, her doctors encouraged her to keep dancing. “They said my body would respond well if I maintained a routine I was used to. Dance has always been my life, but after being diagnosed it really became my life…and the only thing that made me feel like myself.”

Maggie’s motivation continues through her unswerving dedication to dance — creating, promoting and performing — despite her monthly visits to Mercy Medical Center for chemotherapy. “I am dedicating this concert to everyone who has taken care of me, helped me and supported me. They give me hope and strength and keep me positive.” 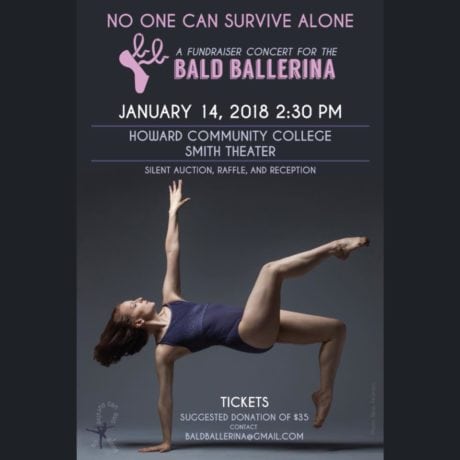 No One Can Survive Alone: A Fundraiser Concert for the Bald Ballerina will take place at 2:30 p.m. on Sunday, January 14, 2018, at Howard Community College Smith Theater — 10901 Little Patuxent Parkway, Columbia, MD. For tickets, email BaldBallerina@gmail.com.