On a cold winter’s night, nothing heats up faster than a fiery debate. And when it comes to political grandiloquence – as timely today as 100 years ago – the Vagabond Players opening night performance of Inherit the Wind not only kept us warm and cozy in its Fells Point home but also engaged us in that passionate fight between opposing lawyers dealing with the hot topic of evolution. The 1955 classic, written by Jerome Lawrence and Robert E. Lee, is loosely based on the “Scopes Monkey Trial” in Tennessee where a high school science teacher was accused of teaching Charles Darwin’s theory of evolution, a “no-no” in “heavenly Hillsboro.”

Oh, to have been a fly on the wall at the actual 1925 trial with Clarence Darrow defending and William Jennings Bryan prosecuting. In this production, however, we’ve got two stellar actors to confront the jury and the audience. Baltimore’s veteran Jeff Murray plays Matthew Brady, the defender of creationism who never gives up his beliefs in the Bible nor the guilt of the hapless schoolteacher. Making his debut at Vagabond, Tom Howley plays defense attorney Henry Drummond like an Irish storyteller. He’s clever and bawdy with his words, yet soft and forgiving when it comes to harming his old friend and foe.

There’s a strong Baltimore connection in this tale of scripture versus science. Sound familiar? The character of critic E. K. Hornbeck (David Shoemaker) is modeled after H. L. Mencken, who covered the Scopes trial for The Baltimore Sun (called the Baltimore Herald in this production) and the science teacher character Bertram Cates (Matthew Mitchell) corresponds to John T. Scopes who was never arrested, according to Wikipedia. Note that author Lawrence revealed in a 1996 television interview that “the drama’s purpose was to criticize McCarthyism and to defend intellectual freedom.”

Vagabond’s director Sherrionne Brown has added lighter touches and some terrific musical interludes to this serious drama – I loved the dueling banjos and gospel singing that resounded throughout the theater during the scene changes. Her set is sparse with a backdrop of the courthouse, two plain tables on each side of the stage, a few chairs, and moveable benches that are filled with 22 cast members during most of the show. We were left to imagine the jail below where Cates was held in a cell or the outdoor square where the zealous Reverend Brown (Peter Wilkes) held his prayer meetings, complete with a “Read Your Bible” banner flying high above.

Brown has assembled a fine cast of actors, both young and old, all who capture the fervor of the small-town characters in the trial of the century. David Chalmers reminds us that a judge may defer to the blustery prosecutor yet also admire the passion of the defense attorney – a nice touch in this version. Tim Evans as the Mayor recalls our contemporary politicians out there for the votes. Lanoree Blake plays the part of Rachel Brown with sweetness and sass, defying her the pastor father by loving the accused. She never breaks character during the trial, even as her body appears shaky and ready to collapse.

Brady does collapse towards the end of the play, falling to the ground after his fire and brimstone preaching. Noteworthy is his wife Sarah Brady (Janise Whelan) who remains by his side during his cross-examination by Drummond who appears touched by her devotion.

I would be remiss not to hype three featured actors. Cool, calculated David Shoemaker puts on a swagger that is both charming and chilling. Carlo Olivi shines as the Bannister/Photographer/Radio Man. And Sam Dye demonstrates that he has a long career ahead of him, judging by his clear, direct portrayal of the young Howard Blair.

Running time: Two and a half hours, including a one 15-minute intermission. 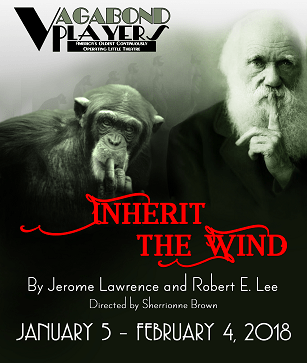 Inherit the Wind performs through February 4, 2018, at the Vagabond Theatre, 806 South Broadway, Baltimore, MD. For tickets, purchase them online.