DC Theater Arts had a chance to sit down with local producer Don Mike Mendoza to discuss the upcoming 6th anniversary of his company La-Ti-Do Productions. La-Ti-Do gives the DC scene a cutting-edge cabaret experience that highlights talented artists and performers from different backgrounds. For those who enjoy substance with their entertainment, their spoken word element adds that little something extra. We delve deeper to find out what Don Mike and La-Ti-Do have in store for us this year.

I know that you finally got to see Hamilton yesterday. I’m curious to hear what your opinions and thoughts are?

It blew my mind. I thought it would be ruined by the fact that I’ve listened to the cast recording and know it like the back of my hand, but it didn’t. The show is so visually stimulating. There’s just so much happening all over the place. 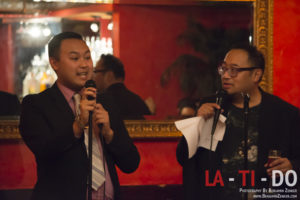 I went on a Facebook rant yesterday because I left that show feeling inspired and angry. After seeing Hamilton on Broadway, along with the staging all of the touring productions, there’s no excuse not to find a handful of people of color to be in your show and beyond people of color, people of different orientations, different abilities. Saying you “can’t do it” in terms of having diversity in your show is not an excuse anymore, especially because Hamilton has done it four and five times over with one show. It’s unacceptable to say, “We couldn’t find X, Y, or Z.” You’re not trying hard enough.

It was nice to see an actual color palette on that stage and also diversity in the leads, where it wasn’t just a classist show where all the leads are white and all the supporting characters are people of color, or where all the leads are men and the supporting characters are women. It was truly mixed and inclusive. I was just so floored by that. I think theaters and production companies and directors and writers just need to be more conscious of what they direct, who they cast, what kind of shows they produce. Unless it’s a show that calls for a specific ethnicity— Miss Saigon, for example—you don’t need to default to white people.

There needs to be some consciousness in the casting.

Right. It’s not just the idea that they have a brown person in the show. It’s about who they are, what role they’re playing, and what it looks like from the outside— not just the fact that you’ve checked off a box. Hamilton really drives that home.

Let’s go ahead and talk about your company. Can you tell us a little bit about La-Ti-Do?

La-Ti-Do came out of a friendship with my co-founder Regie Cabico. We played brothers in a play in a Filipino show in Capital Fringe in 2011 and we stayed in touch afterward. Regie told me that the only way to be happy as a person of color, and find a little more success is to create your own opportunities and have the things that you are cast in as secondary to creating your own space.

We stewed on that for six months and decided to do a series that was spoken word and musical theater in the same space, since that didn’t exist that we were aware of, and also make it a cabaret setting. There was very little of that in DC at the time and we saw ourselves as really helping to restart the cabaret conversation within DC.

Are there any other functioning cabaret companies right now, that you’re aware of?

We started in January 2012 and January 2018 is our six-year milestone. It’s been a ride. We are at a point that I never thought we would be at, which is so exciting and so scary. In life, you dream about things and you want things to happen, but it’s always a shock when you actually get to the point of it actually happening with it being successful and something that makes change. 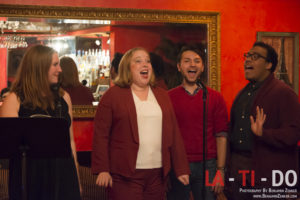 Despite the changes we’ve gone through since we started, the main hallmarks of La-Ti-Do remain true: Creating a safe space for our performers to do what they love, do their art, do it for an audience, not feel judged, and not feel that it’s a job. We want them to feel like it’s a place they can come home to, that it’s a community that they can be a part of, and that it’s a group of friends and family that you see at each show. Once you’re hooked into this group, we take care of each other.

The sub-goal to that is to feature under-represented communities in terms of marginalized individuals, in terms of LGBTQIA, and in terms of socio-economic class. We try to make sure that we really and truly are inclusive of who we bring in. We have raw talent and trained talent. We’ll see how that continues transforming in this new season.

Tell us about your upcoming season. What are you most looking forward to this year?

I’m looking forward to having a show once a month. For four years the show was weekly and that was cuckoo-bananas. Producing a different two-hour show every week, with different people every time…it was insanity.

A lot of juggling?

Yes! A lot of juggling and a lot of fun. We met so many people, which was just a fantastic launch point for us. I’m really looking forward to having a show once a month, that is through-the-roof high quality. We’re still welcoming as many people as we can to the space, but we’re going to have a four-piece band and we’re ordering a new sound system, which will make its debut in February. We’re rebranding and going in the direction of making things streamlined.

Personally, what I’m looking forward to is working with a new group of monthly feature artists. It’s always so fun to see what these people bring to us and also to get to know these performers on a deeper level. The common experience with all of them is that they’ve all gone through our program from start to finish as a guest performer or audience member, then as mid-level features with a longer set. Now they’re monthly features and they really embody what La-Ti-Do is: Somebody who keeps coming back, someone who supports the organization and understands that we’re still very new. Even at six years, we’re still changing and learning and they also have changed and learned in their set and in what they bring to the table.

I look forward to taking La-Ti-Do Productions into its next phase of life outside of the cabaret because we have events planned for this year that are outside of our cabaret brand. We’ve worked on other events before, but to foster those relationships and do more with them is really exciting.

Can you tell us what the audience can expect at a La-Ti-Do show? Are there any surprises on the horizon? 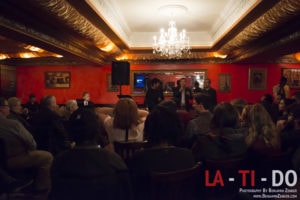 If a random person was just to stumble upon us one day, they would find a warm environment. It’s not a theater — our venue is red, it’s very bright — you walk in and it’s also a restaurant. When they come to the show they should expect to see artists doing what they enjoy doing, and being fearless with what they are bringing to the table.

The audience may see a spoken word artist that’s trying a new poem or long form, even a comedian trying out a new set. The audience should expect to see enthusiasm for art, but also a safe space to see performers take risks and grow as an artist, right in front of them. We don’t make it a big deal if someone forgets their words.

Do you have any goals for La-Ti-Do looking beyond 2018?

To check back into the “surprises” that you mentioned earlier. I would say that the surprises this season will be in the kind of material that people bring to the show. With many La-Ti-Do performers, you’ve only seen their public “brand,” what they do on a regular basis. What we’ve noticed is that these singers will come to the show and break it and do something different. You might see someone who is usually in Golden Age shows come and sing a pop song. You’ll see a spoken word artist come and sing, or a singer do a poem. That’s the truest surprise. You can see that “newness” at every show, and there’s always some “Easter egg” waiting to be hatched.

In terms of goals, the La-Ti-Do Productions would like to do more in the community. Internal goals include connecting with our alumni in a stronger way. We’ve had at least a thousand artists come through in the last six years and we want to reconnect with our alumni, which is why our anniversary theme is “homecoming.” We’re bringing back a lot of monthly features since we started the monthly feature program in our first year. Without the people who have been a part of the 350 to 400 shows we’ve done, we wouldn’t exist.

Thank you, Don Mike. I think we’re going to go ahead and conclude, is there anything you’d like to say as a closing statement?

One thing that I also want to touch on is our New York show. Establishing the show in New York has always been interesting. I want to encourage people to follow our New York adventures and come check it out. Many of the performers are alumni that have come from DC, as well as performers that we’ve met up there.

We have a partnership with The Duplex Piano Bar and Cabaret Theater this year. We’ve got a venue with full tech that’s all about cabaret and we get to bring in our programming. Our next show there is on January 27, 2018 and features two La-Ti-Do alumni from DC that have a duo called HEROINE that includes DC favorites Ines Nassara, who is going to be Dorothy in The Wiz that’s opening at Ford’s Theatre in March 2018, and Bridget Linsenmeyer.

La-Ti-Do is not here to compete. We never have and we never will. La-Ti-Do is its own brand and its own community. We’ve always wanted to support the DC community. We’re not here to take down other cabaret series that are around us. Our biggest goal is collaboration and support. I think that’s why we and DC Theater Arts always get along so well, because that is a thread that we share— supporting the community that we are a part of.

At the end of the day, it’s not about money for us. It’s about the presentation and what we put together. We’re people that are passionate about the art, not what we get for it. Come to La-Ti-Do to enjoy yourself, feel welcomed, and have a night that I know will make you want to come back.