Wit, the Pulitzer Prize-winning play written by Margaret Edson and directed at Silver Spring Stage by Jeff Mikoni, graces the stage with a darkly comedic tale of a strict university professor dying of ovarian cancer.

Emily Morrison is Vivian Bearing, Ph.D, a stern scholar of John Donne’s poetry who has been stricken with metastatic ovarian cancer, which proceeds to kill her over the two hours in which this show takes place. The story itself is split into vignettes about Vivian’s life, interspersed with contrasting scenes of her enduring the humiliation and monotony of an experimental chemotherapy which leaves her hospitalized most of the time.

Emily Morrison breathes life into this dying character in a way that will stay with the audience for a long time. Morrison never overplays this role. She brings the exact right amount of levity and gravity to Vivian Bearing’s character.

Gary Sullivan plays Vivian’s diagnosing oncologist and researcher Harvey Kelekian, M.D. with flair. He is joined by Sebastian Leighton as a nervous Jason Posner, M.D., who studies under Kelekian. Sebastian is particularly believable as a student treating a former professor. His performance shows his obsession with the idea of cancer, as well as his reticence in performing the day-to-day functions of treating patients instead of working in a lab.

Katie Wicklund believably portrays nurse Susie Monahan. One of the more memorable scenes in this play takes place between her and the standoffish Vivian Bearing towards the end of Vivian’s life. These characters act as a sort of foil for each other. Vivian is an elitist who prides herself on being a scholar of an obscure subject, yet she finds she isn’t as able to reach out and connect to other humans as well as nurse Susie.

Barbara O’Malley plays Vivian’s former professor E.M. Ashford, also a scholar of Donne. O’Malley carries the scene where we are first introduced to the core conflict that Vivian faces with aplomb. The role of Vivian’s father is believably played by Joshuah Laird. The fantastic ensemble, including Michael King, Brynn Krasney, Omar LaTiri, and Kristyn Lue, is also noteworthy.

Set Designer Jimmy Stubbs creates an adequately sparse hospital environment that switches from the pedestrian dealings between doctor and patient to Vivian’s sparse inner world where she explores the meaning of life. Lighting Designer Steve Deming also lends his talents to the somewhat shadowy world of Vivian’s subconscious.

Wit is a play about control. Much like John Donne, Vivian finds herself questioning life and death and interrogating it with words, only to find that words are not always the only thing needed to endure. Emily Morrison turns in a stunning performance as a Vivian Bearing coming to grips with her increasing lack of control over the disease which is ravaging her body. With Emily Morrison as the lead, this Wit is sure to get a standing ovation.

Silver Spring Stage’s Wit is a dark and humorous look at the forces of life and death which direct our destiny. Wit is must-see theater at its best. 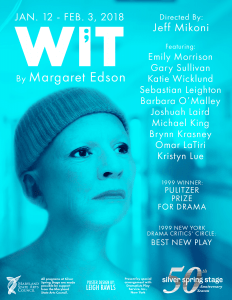