The Way of the World, a deft satire of the mating habits and financial vicissitudes of the 1%, arrived at the Folger Theatre last night. It was a hilarious evening. Theresa Rebeck’s comedy, very loosely based on William Congreve’s The Way of the World, reminds us that bad behavior, in Restoration England or 2018 New York, can be fascinating, gasp-inducing, and very, very funny. Rebeck, a prolific writer for theater, film, and television, was named one of the 150 Fearless Women of the World by Newsweek magazine. What better choice to celebrate Women’s Voices?

The setting is the Hamptons, the playground of the 1%. As the play opens, Reg (Elan Zafir) and Charles (Brandon Espinoza) are razzing their buddy Henry (Luigi Sottile) for alienating Mae, his onetime love interest, who has beauty, an altruistic disposition, and incidentally a $600-million-dollar inheritance. Mae has never recovered from the shock and disappointment of learning that Henry slept with her Aunt Rene (Kristine Nielsen), a flamboyant, Auntie-Mame like older woman, who is for all intents and purposes Mae’s mother.

Kristine Nielsen’s Aunt Rene is an astonishingly original creation, a combination of high spirits, rage, and good old feminine resourcefulness. I half expected her to burst into song like Ethel Merman any minute, and start belting out “You Can’t Get a Man with a Gun.” The Machiavellian brilliance of Rene, which is revealed gradually throughout the evening, is a refreshing take on Congreve’s Lady Wishfort, who spends most of her time trying to entrap uninterested men and watching her makeup flake off.

Rebeck also transforms Millamant, here introduced as Mae. In Congreve’s work, Millamant is witty and assertive but never engages with the larger issues of her society. Rebeck’s Mae wants to give away all her money and help the people of Haiti, which makes her easily the most sympathetic person onstage. She receives little or no encouragement for her plan, but as Eliza Huberth enacts her, is a touchingly honest and thoughtful creature.

Mae’s principal foil is Katrina (Erica Dorfler) who embodies the hard-edged approach to life favored by most of her friends. Dorfler captures every nuance of the role, from her let-them-eat-cake approach to the waitress to her mean-girl indignation when Henry fails to call after they spend the night together.

Henry is a womanizer, but he is presented as sincerely in love with Mae. Sotille’s Henry successfully embodies these contradictions. He is a man at war with himself, even as he attempts to win Mae back. His friend Charles (Brandon Espinoza) is totally down with the Hamptons gossip and infighting, although he has some deeper longings of his own. Espinoza adroitly highlights Charles’ fierce determination to remain part of the scene, no matter how much it costs him.
Henry’s other friend Reg, as played by Elan Zafir, has a kind of good-old-boy bonhomie which makes some of his retrograde remarks much more palatable. He displays surprising growth, and Zafir portrays his evolution with enthusiasm. Of course, as is to be expected, that new maturity has its limitations.

Henry deploys Lyle (Daniel Morgan Shelley) who is just in from Nantucket, to keep Rene busy so he can be alone with Mae. Lyle, unlike the others, is a gracious fellow, and, like the outsider Sir Willful in Congreve’s play, is morally one cut above his surroundings. He is especially fine in his scenes with Rene, as he attempts to be gentlemanly in an awkward situation.

The Waitress (Ashley Austin Morris) is the only “regular person” we get to know. At first, overawed by the glamor and money all around her, she gradually becomes disenchanted and ends up making a mistake that renders her vulnerable to Henry’s manipulations. I was reminded of my own visit to Naples, Florida a few years ago. There, a housekeeper told me in whispers, “The rich people live here now. The rest of us had to move out of the city. We can’t afford it.” As Rebeck says in her Playwright & Director notes: “The wealth gap in America is becoming so wide that we are losing sight of how to relate to each other in meaningful ways.”

Congreve’s The Way of the World opened in 1700, towards the end of the dominance of Restoration drama in England. The commoditization of love, the emphasis on material wealth, and the shallow pursuit of fashionable people and things was in full force at that time. “Restoration” alludes to the fact that in 1660 Charles II was restored to the throne after years of exile. After over a decade of Puritanism (and no theater), England became a much more tolerant, fun-loving place. Charles, known as “the Merry Monarch” not only brought back the theater, but championed the introduction of women to the stage. He married the quiet, complaisant Catherine of Braganza, but was unable to produce a child with her. He had illegitimate offspring by many mistresses.

One of his most famous was Nell Gwyn, an illiterate orange seller who became the most celebrated comic actress of her time. Nell is especially remembered for one incident, which captures the mood of the Restoration. One day, as Nell was passing through the streets of Oxford in her carriage, the mob mistook her for her rival, Louise de Kérouaille, the Catholic Duchess of Portsmouth. The crowd began hooting and hurling epithets. Putting her head out of the coach window, she addressed her tormentors. “Good people”, she said, “You are mistaken; I am the Protestant whore.”

Charles, although he shared our current president’s womanizing ways, was far more likable. It is well known that during the Great Fire of London, Charles joined the firefighters himself, displaying great courage. As he lay dying, he gave thought to some of his former loves. “Let not poor Nelly starve,” he is reported to have said.

Although Charles was dead by the time The Way of the World opened, the spirit of the Restoration was still very much alive. In modernizing the script, Rebeck has excised some characters and changed the relationship between the leading couple considerably. Restoration drama features the convention of the “gay couple” who exchange witticisms as they travel the rocky road to love. The male was usually a rake, and the female was usually trying to maneuver him into marriage. There was a certain mystery to their courtship, which lent it elegance and romanticism. It’s hard to imagine such a pair today, when we all suffer from a surfeit of information.

Unlike Mirabell in Congreve’s classic, Henry repeatedly lets himself and others down, while still proclaiming his love for Mae. The scene in which they come to terms (or not) is one of the most compelling of the evening. This is 2018’s battle of the sexes, and Rebeck is as always true to the integrity of her characters.

The performances are first-rate, and the creative team full of innovative ideas. The set (Scenic Design is by Alexander Dodge) is largely white (very New York) and in a backdrop of white boxes we see a number of items; a purse, a necklace, drinks, even hats. This underlines the obsession with things which is at the heart of the production. Lighting, equally skilled, is by Donald Holder, a Helen Hayes nominee for Salome last year. Sound design (M.L. Dogg) includes some well-chosen contemporary hits. The costumes, by Linda Cho, are full of color and variety, and not at all naturalistic. Perhaps this is to emphasize the fable-like aspects of the story.

Theresa Rebeck is one of those rare playwrights who can direct her own work successfully. With The Way of the World, she brings us a riotously entertaining evening. 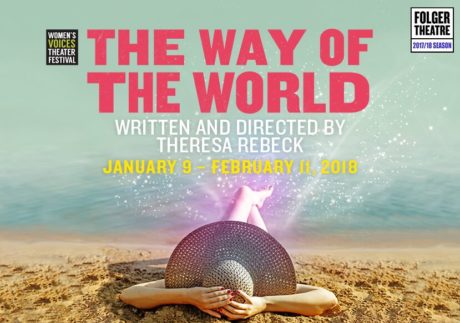 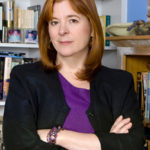 Theresa Rebeck is best known for her plays Seminar and Mauritius, which both premiered on Broadway, as well as Spike Heels, Bad Dates and Omnium Gatherum, and her TV show Smash. Upcoming projects the world premiere of Downstairs, starring Tyne and Tim Daly. Theresa and composer Josh Schmidt are adapting the film Dance, Girl, Dance, as a stage musical, and she has created a stage adaptation of the fable Stone Soup with John Weidman. Theresa adapted and directed the film version of Poor Behavior and directed her original screenplay for Trouble, starring Anjelica Huston and Bill Pullman. Other films include Harriet the Spy, Gossip, Sunday on the Rocks and Seducing Charlie Barker, an adaptation of her play, The Scene.