Veteran Chicago improvisers Tara DeFrancisco and Rance Rizzutto have traveled together to 20 countries and more than 50 U.S. cities to perform their improvised musical, HERE, recently called “nothing short of genius” by NPR.

The format of the show is simple: get a one-word suggestion from the audience and use it as a springboard into the first song of the show to establish the overarching theme. “Once we have the theme it becomes more important than the word that was thrown out [and then] we follow the story where it leads us,” says Tara.

The seasoned duo, who recently founded the Nest Theatre comedy club in Columbus, Ohio, have found comfort in the highly unpredictable nature of their format. According to Rance, “Our show is pretty low-tech, and in most of the cities we go to, we don’t know the person who’s going to play keys for us.” Their rehearsal time is purposefully short and mainly designed to clue the pianist into their format. The rest is left to be made up on the spot. No two shows are the same and each performance is a surprise to them as well as the audience.

The title of the show is straight-forward yet symbolic of their views on life and performance. Rance explains, “HERE is wherever we are, we don’t always know where we’re going [next], but it’s also a reminder to stay present and in the moment – to not get ahead of ourselves – during our show.”

This philosophy helps them remain focused on the story that’s being woven together through their performance. The musical elements as described by Tara “elevate the emotion of a scene. It unlocks a different level of play and a beautiful moment between humans that isn’t always easy to capture.” It’s beyond just making people laugh; it’s about creating meaning and making people feel.

Their upcoming show at Imagination Stage in Bethesda will be their first in that venue and in Maryland. This opportunity landed on their radar through Michael Zhuang, a resident of Bethesda, nicknamed “The Investment Scientist” for his founding of MZ Capital Management. Mr. Zhuang has traveled the world and spent countless hours researching, studying, and practicing his love of musical improv. In 2017, he began sponsoring up-and-coming talent from the improv-comedy meccas of New York City and Chicago to perform locally, with the goal to embed musical improv into the fabric of Bethesda’s growing arts and entertainment culture.

Through his wealth management firm, he creates opportunities for emerging artists to showcase their talent to a broader audience and take a slice of Bethesda back with them to their cities. Tara and Rance is the second performance group from outside the DC metro area that he’s invited to perform locally. He sponsored the hip-hop improv group North Coast with a three-show run last year.

When he saw Tara and Rance perform more than a year ago, he knew then that he wanted to find a way to bring them to Bethesda. “I was blown away by their beautiful voices and ability to bring characters to life.” 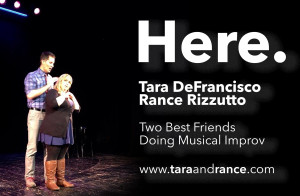