Bravo Productions had their first of two productions in 2018 this past weekend. Fiddler on the Roof JR ran for four shows in two days to completely packed houses. The Junior musical is a condensed version of the beloved Fiddler on the Roof by Jerry Bock (Music), Sheldon Harnick (Lyrics), and Joseph Stein (book). Though there are distinct differences from the original, the core of the show, along with the story’s message and sentiment, remain. 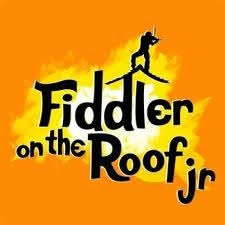 Laurie Levy Issembert, who is also Bravo’s Executive Producer, directed the piece, along with Music Director, Debbie O’Neill, and Choreographer, Diane Benson Hamilton.  The set was simple and effective with a small hut that could represent various places, and there was Tevye’s classic horse-drawn cart, minus the lame horse of course. Dialogue and verses of songs were cut but, unless you were very familiar with the show, the changes were unnoticeable and the show flowed smoothly.

Sexter was the principle character, Tevye. The character goes through many challenges, and battles with finding the balance between evolving changes of the times and entire departures from tradition. I was very curious to see what this young actor would do with such an emotionally heavy story, and was pleasantly surprised with how Sexter was able to portray the struggle between Tevye’s love for his daughters and his devotion to his religion. One of the most well-known songs of the show is Tevye’s “If I Were a Rich Man” and Sexter did a fantastic job with the comedic song. Throughout the show, he depicted the complexity of Tevye’s character with well-timed humor and somberness.

The main plot of the musical focuses on Tevye’s three oldest daughters Tzeitel (Chernoff), Hodel (Labovich), and Chava (Strauch), who each get married in non-traditional ways, in an increasingly radical fashion. All marriages are arranged through the matchmaker, Yente (Klugerman). The daughters sing “Matchmaker, Matchmaker” about longing for a “perfect match”, but Tzeitel points out her younger sisters’ naiveté, reminding them that their intended could end up being a horrible match and they should not be so eager to be wed. The song is light and lovely, and Chernoff, Labovich, and Strauch had strong voices that blended well.

Tzeitel chooses who she wants to marry, instead of accepting the arrangement that has been made through Yente, and asks for her father’s permission. The poor tailor, Motel (Bovo), is a childhood friend of Tzeitel’s, and they promised each other to marry as soon as Motel had made enough money to be able to support them. Bovo and Chernoff work very well together and Bovo is especially endearing with his hesitant determination to make his own decisions, instead of bowing to tradition.

In “Tevye’s Dream”, Tevye makes up a nightmare to justify the change in Tzeitel’s engagement from the wealthy Lazar Wolf (Goldberg) to Motel. In the dream, Wolf’s deceased wife, Fruma-Sarah (Alexander), comes back from the grave to threaten Tzeitel’s life if she marries Lazar. The number is hilarious, and Alexander was excellent as the shrill and over-the-top Fruma-Sarah.

The next daughter in line to marry is Hodel (Labovich). She forgoes any request for permission and simply informs Tevye of her self-made arrangement with Perchik (Conroy), a teacher and revolutionary, and merely asks for her father’s blessing. Ultimately, Tevye gives her permission and his blessing, and Hodel leaves Anatevka to be with Perchik in Siberia. The touching “Far from the Home I Love” was beautifully sung by Labovich, as she explains why she must leave and says goodbye to her father at the train station.

There are many standout characters and, while Tevye is certainly at the center of the story, his wife Golde (Miller) is vital to the show and his character’s journey. Miller and Sexter were a hilarious pair and brought the crucial light-heartedness of the story that is necessary to balance out the serious subject matter. They sing the sweet “Do You Love Me” after Tevye tells Golde of Hodel’s engagement, explaining, “Love, it’s the new style”.

Fiddler on the Roof JR is a moving musical with many memorable characters, and the budding actors did a great job in keeping with the integrity of the story, while also making the show their own. Each of the kids deserves kudos for their performance, as well as their dedication and professionalism.

Bravo Productions continuously puts out quality shows where kids can gain knowledge and experience in the theater industry. Regardless of where the future takes them, these young artists are learning about diversity, expression, public speaking, teamwork, and organization, which are invaluable lessons in any field.

Running Time: One hour and 10 minutes, with no intermission.