Based on the 2005 book by Dave Barry and Ridley Pearson, Peter and the Starcatcher is a Tony Award-winning play by Rick Elice, with music by Wayne Barker. A lively production opened Friday, January 26, presented by the Reston Community Players. Directed by Jolene Vettese, the show had many creative moments that engaged the audience’s imagination, such as an onstage sound artist (Jessie Roberts), athletic antics devised for actors, and inventive flying of characters. After all, this is a prequel providing the backstory of Peter Pan, Captain Hook, and other characters from J.M. Barrie’s novels.

The script is full of clever wordplay, such as Neverland being the name of a very slow and untrustworthy ship, and the actors take joy in providing the campy jokes and puns. The set by Dan Widerski, uses multiple levels, sail rigging, cargo holds, an upstage projection screen, and a partial wall to cover the onstage pianist (Musical Director Beth Atkins). One of my favorite uses of lighting was when streams of light (creatively designed by Ken and Patti Crowley) came up through a trap door that looked like a ship’s cargo hold, heralding the entrance of a certain tick-tocking croc.

The cast is a committed group of actors, most of whom are in roles meant to be hammed up to the max. The ringleaders of this acting style are the delightful Carla Crawley Ito as the pirate captain Black Stache, and the wonderfully silly Joshua Paul McCreary as Smee. Less hammy, but equally as well cast, are Raeanna Nicole Larson as Molly, and Gary Bernard DiNardo as Boy/Peter. We see hints of the potential relationship between the two in Act I and the actors bring an honest sweetness to the character’s romantic moments in the less frenetic second act.

Music, sound effects, singing, frantic stage business, and lines overlap on occasion, at which point the storyline was less clear, but I expect this will be ironed out as the show gets practice in front of an audience. These were greater issues in the busy first act, and once the curtain rises after intermission on what was my favorite musical number, the show’s story seems cleaner. With every actor playing a singing mermaid transformed by magic “starstuff” from everyday fish, the costume designer (Tiffany Fowler) really got to go wild. To be clear, Fowler’s costumes were brilliant throughout. I was especially impressed with the use of matching fabrics for Molly’s dress and the overcoat of her father, Lord Aster (Richard Durkin).

Peter and the Starcatcher does not fit clearly in standard theater categories. Both children and adults will enjoy it, though it sometimes seems to play directly to one then the other. It is hard to call this show a musical, though there is percussion, a live piano, and singing in it. Amy Griffin, who plays Molly’s Nanny has a number of well-sung acapella tunes and the whole cast sings a few brief songs, but the songs are few and far between, and the playbill doesn’t list them. I longed for fuller arrangements of the music.

The greatest joy comes from the production’s theatricality as actors transform socks into birds, play dozens of characters with quick costume or wig changes, or conjure “magic” with evocative creative choices. Anyone familiar with Peter Pan will appreciate this fanciful imagining of its origin story, as told by Reston Community Players’ fun-loving cast.

Running Time: Two hours and 30 minutes, including one 15-minute intermission. 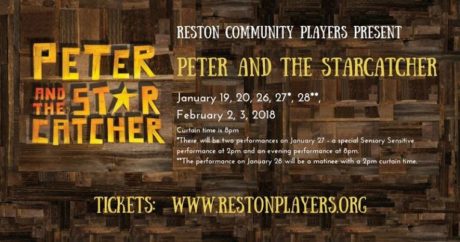 Peter and the Starcatcher plays through February 3, 2018. It is produced by the Reston Community Players, performing at the Centerstage, Reston Community Center, 2310 Colts Neck Road, Reston, VA. Tickets for the sensory friendly performance on Saturday, January 27 at 2pm are only $15. For tickets, call the box office at 703-476-4500, or purchase them online.