If the Women’s Voices Theater Festival existed only to give us Sarah DeLappe’s The Wolves, it would be worth it. But we have more than 20 other new plays by female playwrights to enjoy in this year’s festival. How lucky we are to be alive right now.

The Wolves, directed by Marti Lyons, springs to vivid life as the team (er—cast) circles up for pre-game stretches. The Wolves are a female indoor soccer team comprised of 16- and 17-year-olds. Their stretching routine is as perfectly polished as synchronized swimmers. They have done this so many times they don’t even look to the captain to lead the ritual. The popcorn-like dialogue and multiple conversations happening at once sound familiar. How about that — a play that perfectly encapsulates how a group of teens would really sound.

The pacing and timing of DeLappe’s dialogue keeps the audience in close step with the story. If we zone out for a minute we will miss something. So the audience stays close. And, for that matter — we are close. The set is an indoor soccer turf flanked by the audience on either side. The audience member furthest from the stage is maybe 20 feet away from a cast member.

Lighting (Paul Toben) and sound design (Mikhail Fiksel) are used very effectively to bring intensity to the transitions. They also help us get into the psyche of the team. These girls are competitive warriors. The pressure is mounting. They are on the road to nationals. And college scholarships. And becoming adults. This is no half-hearted Saturday morning soccer.

One of the play’s triumphs is how it manages to fully flesh out each teen girl archetype it brings to the stage. And they’re all there: the new girl, the captain, the bad girl, the sidekick, the class clown, the genius, the good girl, the drama queen, and the chatterbox.

The collective acting chops among the cast are a singular force to be reckoned with. Every cast member has fully bought into the given circumstances. Not only are they soccer players but they are a soccer team. Anyone who witnesses the play and has ever been on a team will be reminded of their own experience working together to accomplish a goal. There wasn’t a performance in the lot that left me ambivalent.

These actresses are stars and deserve to have their names in the papers: Lindsley Howard (#11), Chrissy Rose (#25), Sara Turner (#13), Melissa Czyz (#2) , Shanta Parasuraman (#8), Jane Bernhard (#46), Maryn Shaw (#14), Katie Kleiger (#7), Gabby Beans (#00), and Anne Bowles (Soccer Mom). While every performance was next-level good, I’d like to (in keeping with the sports theme) give Katie Kleiger the MVP award. She gave #7 an impossibly perfect balance of edge and vulnerability.

Get to Studio Theatre not only to support a beautiful movement to shine a spotlight on excellent new work being written by women, but also because it is simply one of the most well-acted productions in D.C. this season. 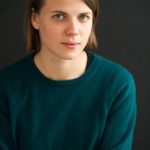