The Shakespeare Theatre Company’s production of Hamlet, directed by Michael Kahn, is a rich, multi-layered interpretation of a uniquely great play.

Hamlet is central to the Western literary tradition. Mark Rylance, whose Hamlet was by all accounts memorably deranged, remarked that, “There have been more books alone written about Hamlet than have been written about the Bible.”

We are fortunate to have the gifted Michael Urie as Hamlet. He is all motion, vividly alive, operating at a physical and mental speed approximately three times as fast as those around him. His soliloquies sparkle with creativity and humor.

The velocity of his performance derives from his traumatized emotional state. His pain is so great that he has been catapulted into an emotional realm where he is utterly alone. No one can contact him. He is separated from his loved ones as if by a pane of glass.

The horror, for him, is not only the murder of his father. It is the oppression and violence of his entire society. Nazi-like emblems are everywhere: on the soldiers’ armbands, above the balcony, at the lectern where Claudius gives his unctuous speech. The police and soldiers carry guns. In this totalitarian world, independent thinking is punishable by death. Hamlet’s inner conflict and the outward corruption of his universe mirror one another with breathtaking clarity.

In the first scene, three security guards, Marcellus (Avery Glymph), Barnardo (Chris Genebach), and Francisco (Brayden Simpson) see the Ghost (Keith Baxter) on a large security camera, high above them. Horatio (Federico Rodriguez) is skeptical at first but agrees to tell Hamlet what has occurred.

Claudius (Alan Cox) and the court enter; it could be a press conference from Scandal. The power suits. The photographers. The stately Queen, Gertrude (Madeleine Potter), all in red. Hamlet stands to the side, brooding. Claudius’s speech is, fittingly enough, simultaneously being shown on TV. Hamlet agrees not to go back to Wittenberg to study but makes it obvious he is only doing it for his mother. Claudius, a capable politician, smooths over the awkwardness with “Why, ‘tis a loving and a fair reply.”

Hamlet is full of spies. Rosencrantz (Ryan Spahn) and Guildenstern (Kelsey Rainwater), here a young couple, are recruited to spy on Hamlet, although he sees through them immediately. Hamlet takes a listening device away from Ophelia; later, he rips down a security camera. Polonius orders Reynaldo (Brendan McMahon) to spy on Laertes. Polonius spies on Hamlet and pays for it with his life.

Gertrude is curiously stoic at first. One wonders what on earth is going through her mind. Her grief for her husband must still be very new. Was there something wrong in the marriage? Why did she marry Claudius so quickly? Perhaps she thought it was the only way to ensure her safety in such a perilous environment. As Madeleine Potter portrays her, she gradually becomes more and more aware of Claudius’s duplicity. Her confrontation with Hamlet is intensely compelling.

Ophelia’s state of mind at the outset is also in question. How did the court change after the old King’s death? Was it sudden? Slow? A more mature girl would have been asking questions about much more than just Hamlet’s feelings for her. As Oyin Oladejo plays her, she is very young and innocent. This makes her extreme shock at the death of her father (at the hands of her former lover) much easier to understand.

The script has been cut meticulously to avoid some of the textual problems. Robert Joy as Polonius captures both his irritating habit of spouting well-worn truisms, and his proficiency as a counselor to the King and Queen. Keith Baxter (who was Prince Hal in Orson Welles’ Chimes at Midnight) acts with extraordinary depth and skill. His scenes as the Ghost, the Player King, and the Gravedigger are among the finest of the evening.

In this production, Hamlet overhears Polonius’ plot to “loose” his daughter to him and knows that she agreed to assist her father. This explains his dreadful behavior to her, in the “Get thee to a nunnery” scene. His disillusionment with her renders him even more alone.

Most of the minor roles are performed with style and energy: the guards in the first scene; Lise Bruneau as the Player Queen/Cornelia, David Bryan Jackson as Voltemand, Chris Genebach as Lucianus, and Gregory Wooddell in his expanded role as Osric. Hamlet’s scenes with Rosencrantz (Ryan Spahn) and Guildenstern (Kelsey Rainwater) work especially well.

Paul Cooper’s Laertes, though well-acted, might benefit from more definition. The same is true of Avery Glymph’s Fortinbras and Federico Rodriguez’ Horatio.

The costumes by Jess Goldstein are well-suited to the overall design. The security guards and soldiers wear uniforms. The Queen, an enigmatic figure, is in deep reds and blues at first, then black and magenta, then black, which echoes her emotional journey. Before the play-within-the-play, Hamlet puts on a marvelous Fool’s costume, complete with a Lord of Misrule-type hat. He might be Touchstone in As You Like It.

Lighting (Yi Zhao) is superb, although there were instances where I could have benefited from more light on the actors’ faces. Projection/Video Designs by Patrick W. Lord and Sound Design and Original Music by Broken Chord are of equally high quality. Every attribute of the production is precisely coordinated.

Michael Urie is a Hamlet of today; his Elsinore is something of a warning.  Hopefully, as Sinclair Lewis once said, It Can’t Happen Here. 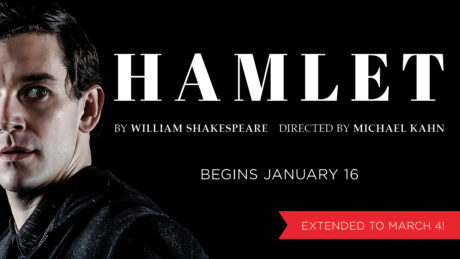 Running Time: 3 hours, including one intermission.