“What Mary Kathryn Nagle has given us on stage tonight is the history we don’t learn,” said renowned feminist author and activist Gloria Steinem during one of the most buzzed-about talkbacks of the theater season. The occasion was a  Sunday night performance of Nagle’s Sovereignty, the electrifyingly illuminating new play now at Arena Stage directed by Artistic Director Molly Smith as part of the Women’s Voices Theater Festival.

At the heart of Nagle’s Sovereignty is a profound parallel between a woman’s fundamental right to control of her own body and the supreme right to self-governance of a nation. That connection—presented in the script as material not just metaphorical—prompted Arena to program a riveting post-show panel moderated by Smith with the feminist icon and the playwright.

One of Arena’s series of Power Plays, Sovereignty tracks the determination of a character named Sarah—who like playwright is a lawyer and citizen of the Cherokee Nation—to overturn the 1976 U.S. Supreme Court decision in Oliphant v. Suquamish Indian Tribe that disallows an Indian nation from bringing to justice any non-Indian who commits a crime on its land. As a direct consequence of the legal immunity this reprehensible ruling grants, outsiders perpetrate sexual violence against Indian women and children at shocking rates. They know they can get away with it and they do.

In the play Sarah is beaten and raped by her non-Indian husband. Deciding to charge him, she says:

Many in the audience had come specifically to stay for the panel, and during the performance, there was a pronounced commonality of audible responses. At one point a forceful line spoken by Sarah (played with grit and grace by Kyla García) got a reaction akin to a zinger at a rally speech. The crowd had come to be wowed and they were.

Nagle began her remarks talking about the history of colonial rape against Native women. Violence against women, she said, was “one of the first and longest-used tactics in the conquest of tribal nations.” One of the first things Christopher Columbus and his men did when they “got lost” and arrived here was to rape Native women.

“Women are the fabric of our nations,” Nagle said, “not just because we give birth to the next generation but we’re a matrilineal society,” meaning that “citizenship and identity within a nation is tied to a mother.” Thus the tactic used historically to destroy the sovereignty of Indian nations by assaulting the sovereignty of Native women’s bodies: “If you want to wipe out a nation, you wipe out the women.”

Steinem then elaborated, stating that a woman’s right to govern her body is “where democracy starts—either we govern our own physical selves or we don’t.” Controlling women’s bodies in order to control reproduction was “the beginning of patriarchy,”  which was “the beginning of all hierarchy.”

Then with her characteristic wry wit, Steinem said to much laughter: “It happens that women have wombs. If we did not have wombs, we’d be fine.”

Underscoring the strength and importance of Sovereignty in performance, Steinem said, “What we have seen tonight is so revelatory for what our concept of democracy is and what our human rights are.”

Nagle’s play turns dramatically on the fact that the rates of sexual assault and murdered and missing women in the U.S. are highest against Native women, the majority of those crimes are committed by non-Indian men on tribal land, and the U.S. Supreme Court has ruled that tribes no longer have jurisdiction over those perpetrators. There is only one exception, built into the 2013 Violence Against Women Act, which grants tribes jurisdiction in cases of domestic violence and dating violence. But if a non-Native man comes on to tribal land and rapes or murders a Native woman, VAWA doesn’t cover it.

Nagle and Steinem co-wrote an op-ed in September 2016 titled Sexual Assault on the Pipeline, in which they discussed the Dakota Access Pipeline and the accompanying “man camps” where construction workers live.

“This is a global problem,” Steinem said. In extractive industries, in Canada and many other countries, men are shipped “where the law isn’t looking.” Mineral-rich areas are often where indigenous people live. And the extractive industries engage in sex trafficking, shipping in women and very young girls for the men to abuse.

Sovereignty is indeed “the history we don’t learn,” as I myself found. It is packed with unsettling things I was not aware of. I did not know it was the economic interests of the Southern owning class the government was serving when the U.S. expelled the Cherokee and other tribes from Georgia and sent them packing on the “Trail of Tears” to live on land that’s now Oklahoma. I did not know that “Cherokee removal” had been Andrew Jackson’s campaign promise. I did not know that Thomas Jefferson had inscribed in the Declaration of Independence a reference to indigenous peoples as “merciless Indian Savages.” The parallels in Sovereignty to the GOP’s allegiance to the one percent and Trump’s racist wall obsession were unspoken but unmistakable.

SEE my take on Jefferson’s Garden at Ford’s Theatre, which deals with Thomas Jefferson’s similarly shameful treatment of former slaves.

Without hesitation, Steinem addressed the house directly: “Well, don’t you feel that you’ve learned more per square minute—?” At which point the audience erupted in applause.

Continuing, Steinem said, “I can’t think of anything that has been so informationally, emotionally, historically, democratically revelatory as what we’ve just seen.” More applause.

“We in this room are never going to behave the same again, right? We are going to understand things we’ve never understood before. And we are going to act on it… It’s going to affect all of our actions and consciousness forever more.” 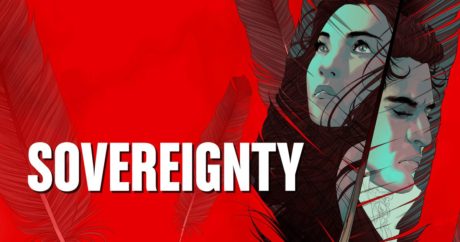 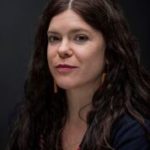 Mary Kathryn Nagle is an enrolled citizen of the Cherokee Nation. She currently serves as the executive director of the Yale Indigenous Performing Arts Program. She is also a partner at Pipestem Law, P.C., where she works to protect tribal sovereignty and the inherent right of Indian Nations to protect their women and children from domestic violence and sexual assault. She has authored numerous briefs in federal appellate courts, including the United States Supreme Court. She has received commissions from Arena Stage, The Rose Theater in Omaha, Nebraska, Portland Center Stage, and Denver Center. Her other plays include Manahatta, Diamonds, Waaxe’s Law, Sliver of a Full Moon, My Father’s Bones, Miss Lead, and Fairly Traceable.