This is the third installment of a five-part series talking with each of these phenomenal women. Today, I am talking with Nataki Garrett, Director of Jefferson’s Garden at Ford’s Theatre.

Natalie Tucker: In the world of #MeToo and the #TimesUp movement, how important is the director of color’s voice to theatre and entertainment world? The Women’s Voices Theater Festival?

Nataki Garrett: I believe that the actions that led to the #METOO movement were perpetuated in a society that didn’t allow for the voice of the victim to be heard. When the voice is absent, the worst in our humanity is loudest. What I bring as a woman, is an opportunity and a demand for people to see and bring a light to those rooms. I am usually the first black female director at the theater or for the actors or designers. I am sometimes the first female director of any race. So creating a space for women and people of color is detrimental to creating rooms where people are seen and heard.

How has DC theatre treated you?

My experience is really great. It’s my second time in DC. DC offers an audience that works to be engaged intellectually and emotionally. I can count on the talk-back to be more than how did the actor learn their lines. The audiences want to engage in the socio and political dynamics. That’s rare which makes DC very special.

Do you try more to be original or to deliver to audiences/producers what they want or go with your own flow?

I like to think of my art as my child and I won’t willingly hand it over to just anybody. I have to ask: Can I share this with you? Can you take care of it and protect it? The artistic process is so emotionally grueling and I’m the kind of director that has to think and feel through the process. Therefore, I have to be discerning about the projects that I take the people and the organizations I work for.  I collaborate with people who trust me because I’m going to be in the trench with them. I’m going to treat their baby as if it was my own.

If you could tell your younger directing-self anything, what would it be?

I would tell her to not be afraid because I am doing what I can do, and the rest is up to God. When met with tougher moments I would say to myself, “Okay, God, I’m going to let you handle it and step in here.” Sometimes stepping away and yielding is better than trying to force it.

The audience is the final character and I am thinking about them from the beginning of the process. Although I don’t want to tell them what to think, I do think about the impact I am making with the work. I tend to work in treacherous landscapes in my work. I tend to deal with very vulnerable societies because I believe the marginalized voice deserves to be heard.

I’ve seen the play at least 150 times before the audience sees it. When there are moments where I get to be surprised and moved even after watching it so many times, that is success for me. It could be the lighting, a sound cue, or the moment showed up in the body of the actor that allows me recognize my own vulnerability as an artist, as a woman, as a black woman. Moments coming together in just the right way. If I can know what it took to get there and still be moved then that is success.

I’m a dramaturgical director. I research for months before rehearsals start.

What is the most difficult part of your artistic process?

I love the process but the most difficult part is knowing that there will always be more that could be done. 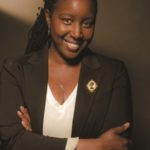