As part of the Women’s Voices Theater Festival, to highlight the diversity and depth of new plays being written by women, Baltimore Center Stage showcases the fourth play of its 2017-18 season with acclaimed playwright and author Dominique Morisseau’s compellingly incisive, timely, and thought-provoking piece, Skeleton Crew.

Skeleton Crew is the third play in Morisseau’s award-winning stage trilogy, examining Detroit in the jazzy ‘40s, the turbulent ‘60s, and the murky 2000s. Set at the height of the 2008 Great Recession when the economic crash had settled in but the auto industry bailouts were still to come, it follows four factory workers at the last exporting automobile factory in Detroit as they struggle to survive amidst rumors of potential firings and looming factory closure.

Adeptly directed by Nicole A. Watson, the action unfolds in a realistically granular employee break room diligently detailed by Mariana Sanchez with a centrally-visible punch in and out time card machine and weathered lockers, accentuated by Burke Brown’s fluorescent lighting and Darron West’s industrialized sound designs. Each of the outstanding four-member ensemble works together to rhythmically push and pull each other in a way that is emotionally gripping and captivatingly rendered with dynamic strength and visceral vulnerability.

From her one-off introduction, Stephanie Berry’s multi-layered performance as Faye, the sharp-tongued but big-hearted 29-year veteran of the line (just months shy of a decent retirement package) and union rep, is top notch. She is absolutely enthralling to watch, particularly in her private moments with Reggie (convincingly portrayed by Sekou Laidlow), the conflicted plant manager whose late mother was Faye’s best friend, as he painstakingly walks a tightrope between corporate bureaucracy and personal loyalty to his makeshift family.

Tensions palpably mount as younger colleagues (Gabriel Lawrence’s hotheaded and enterprising Dez and Brittany Bellizeare’s hardworking and very pregnant Shanita) on the assembly line struggle with the conceivable reality of the plant’s closure.  The pressure is compounded by Reggie’s rampant posts of passive-aggressive rules all over the room and crackdowns on minor infractions with threats of immediate termination, which increasingly leads to perpetual fear and percolating anxiety.

Invigoratingly insightful and authentically absorbing with smart staging and pulsating lyrical dialogue, Baltimore Center Stage’s Skeleton Crew is a riveting, remarkable production, brimming with heart and hope that stirs and sparks from start to finish. 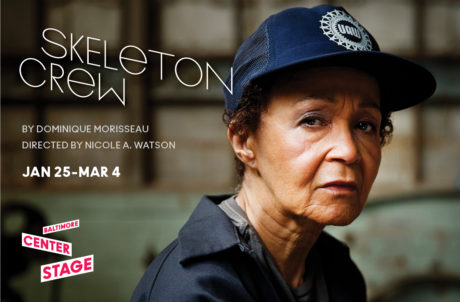 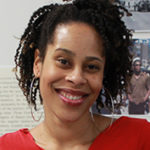